Again and again, I am asked how VCs make money, or more precisely what is their success and failure rate. A typical answer is they fail with 90% of their investments which is balanced by the remaining 10%…

I had also looked at Kleiner Perkins 1st fund in 1972: About Kleiner Perkins first fund. In that fund of $7M, Tandem and Genentech generated >100x returns and 90% of the fund returns. Six of the 17 investments did not make a positive return.

Now Horsley Bridge, a famous fund of funds, shared data on 7’000 investments made by VC funds between 1985 and 2014. This was shown in two blogs articles (In praise of failure & the ‘Babe Ruth’ Effect in Venture Capital) and the overall result is
• Around half of all investments returned less than the original investment,
• 6% of deals produced at least a 10x return, and those made up 60% of total returns,
to the point that the second article claims “Venture capital is not even a home run business. It’s a grand slam business.” Basically venture capital is not about portfolio diversification, it is about Black Swans. I add here two charts coming from the 1st article and which are particularly striking: 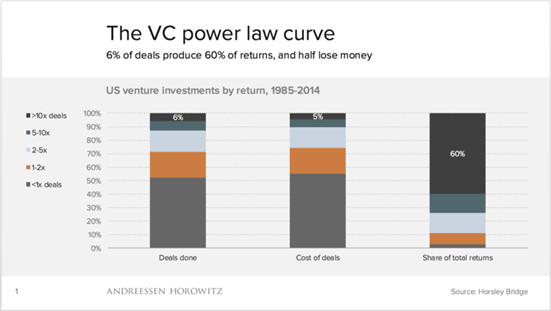 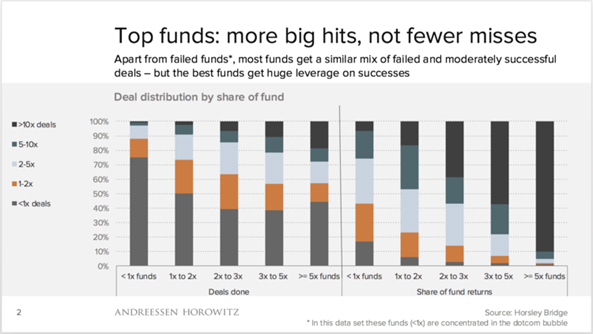