This is again one of my recent readings from old Red Herring. I had already published a post on Bob Swanson, the co-founder of Genentech. This RH article is not that different and I thought it would be important to mention the story again of Boyer and Swanson and the beginnings of the biotech industry. Here it is. 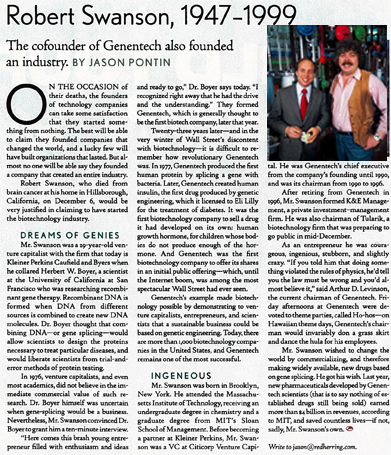 The cofounder of Genentech also founded an industry.

ON THE OCCASION of their deaths, the founders of technology companies can take some satisfaction that they started something From nothing. The best will be able to claim they founded companies that changed the world, and a lucky few will have built organizations that lasted. But almost no one will be able say they founded a company that created an entire industry. Robert Swanson, who died from brain cancer at his home in Hillsborough, California, on December 6, would be very justified in claiming to have started the biotechnology industry.

Mr. Swanson was a 29-year-old venture capitalist with the firm that today is Kleiner Perkins Caufield and Byers when he collared Herbert W. Boyer, a scientist at the University of California at San Francisco who was researching recombinant gene therapy. Recombinant DNA is formed when DNA from different sources is combined to create new DNA molecules. Dr. Boyer thought that combining DNA—or gene splicing—would allow scientists to design the proteins necessary to treat particular diseases, and would liberate scientists from trial-and-error methods of protein testing. In 1976, venture capitalists, and even most academics, did not believe in the immediate commercial value of such research. Dr. Boyer himself was uncertain when gene-splicing would be a business. Nevertheless, Mr. Swanson convinced Dr. Boyer to grant him a ten-minute interview. “Here cornes this brash young entrepreneur filled with enthusiasm and ideas and ready to go,” Dr. Boyer says today. “I recognized right away that he had the drive and the understanding.” They formed Genentech, which is generally thought to be the first biotech company, later that year. Twenty-three years later—and in the very winter of Wall Street’s discontent with biotechnology—it is difficult to remember how revolutionary Genentech was. In 1977, Genentech produced the first human protein by splicing a gene with bacteria. Later Genentech created human insulin, the first drug produced by genetic engineering, which it licensed to Ely Lilly for the treatment of diabetes. It was the first biotechnology company to sell a drug it had developed on its own: human growth hormone, for children whose bodies do not produce enough of the hormone. And Genentech was the first biotechnology company to offer its shares in an initial public offering—which, until the Internet boom, was among the most spectacular Wall Street had ever seen. Genentech’s example made biotechnology possible by demonstrating to venture capitalists, entrepreneurs, and scientists that a sustainable business could be based on genetic engineering. Today, there are more than 1,000 biotechnology companies in the United States, and Genentech remains one of the most successful.

Mr. Swanson was born in Brooklyn, New York. He attended the Massachusetts Institute of Technology, receiving an undergraduate degree in chemistry and a graduate degree from MIT’s Sloan School of Management. Before becoming a partner at Kleiner Perkins, Mr. Swanson was a VC at Citicorp Venture Capital. He was Genentech’s chief executive from the company’s founding until 1990, and was its chairman from 1990 to 1996. After retiring from Genentech in 1996, Mr. Swanson formed K&E Management, a private investment – management firm. He was also chairman of Tularik, a biotechnology firm that was preparing to go public in mid-December. As an entrepreneur he was courageous, ingenious, stubborn, and slightly crazy. “If you told him that doing something violated the rules of physics, he’d tell you the law must be wrong and you’d almost believe it,” said Arthur D. Levinson, the current chairman of Genentech. Friday afternoons at Genentech were devoted to theme parties, called Ho-hos—on Hawaiian theme days, Genentech’s chairman would invariably don a grass skirt and dance the hula for his employees. Mr. Swanson wished to change the world by commercializing, and therefore making widely available, new drugs based on gene splicing. He got his wish. Last year new pharmaceuticals developed by Genentech scientists (that is to say nothing of established drugs still being sold) earned more than $4 billion in revenues, according to MIT, and saved countless lives—if not, sadly, Mr. Swanson’s own.