Here is my second paper published by Entreprise Romande after the one on the Challenges of Innovation. 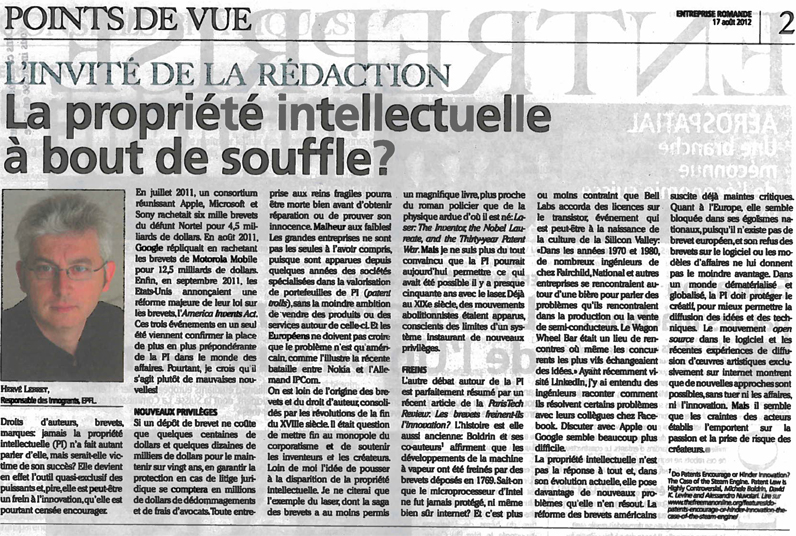 Copyrights, patents, trademarks. Never intellectual property (“IP”) has seemed so visible, but would it be a victim of its success? It is indeed becoming an almost exclusive tool of the rich and powerful and even worse, it may be hindering innovation whereas it was supposed to encourage it.

In July 2011, a consortium including Apple, Microsoft, Sony bought 6,000 patents from now deceased Nortel for $ 4.5 billion. In August 2011, Google replied by acquiring patents from Motorola Mobile for $ 12.5 billion. Finally in September 2011, the United States announced a major reform of patent law, the America Invents Act. These three events in a single summer confirm the increasingly dominant position of IP in the business world. Yet I think it is bad news!

If a patent application only requires a few hundred dollars and tens of thousands to maintain over 20 years, should a company enter in legal dispute over it, it might cost millions in damages and attorney fees. Any fragile business might be dead long before winning a case or proving its innocence. Woe to the weak! Large companies are not the only ones to have understood: companies specialized in the valuation of IP portfolios (“patent trolls”) have emerged in recent years and these companies have no ambition to sell products or services around their IP. And Europeans should not think that the problem is American only as illustrated by the recent battle between Nokia and Germany’s IPCom.

IP is now a far cry from the original patent and copyright statements made by the revolutions of the late eighteenth century. It was then about ending the monopoly of corporatism and about supporting inventors and creators. Far be it from me to push the disappearance of intellectual property. I only here mention the example of the laser patents whose saga has at least allowed a wonderful book, closer to a thriller than the complex physics from which ir was born, Laser: The Inventor, the Nobel Laureate, and the Thirty Patent-year War. But I’m not at all convinced that IP could now enable what was possible almost 50 years ago with the laser. And already in the nineteenth century an abolitionist movement had appeared, aware of the limitations of a system that set new privileges.

The other debate about IP is best summed up in a recent article in the ParisTech Review: “Are patents hindering back innovation?” The story is old: Boldrin and his coauthors [1] argue that the developments of the steam engine were hindered by patents filed in 1769. Do we know that the microprocessor from Intel was never protected, nor of course the Internet, and it is more or less constrained that Bell Labs granted licenses on the transistor, an event that is perhaps at the origin of Silicon Valley culture: “In the 70s and 80s, many engineers from Fairchild, National and others met over a beer to talk about problems they encountered in the production or sale of semiconductors. The Wagon Wheel Bar was a meeting place where even the fiercest competitors exchanged ideas.” Having recently visited LinkedIn, I’ve heard engineers explain how they solve problems with competitors from Facebook. Discussing with Apple or Google seems much more difficult today.

Intellectual property is not the answer to everything and in its current development, it poses more new problems than it solves. The U.S. patent reform has already attracted much criticism. As for Europe, it seems stuck in its national self-interest as there is no European patent and the lack of patents on software or business models does not give it any advantage. In a globalized and dematerialized world, the IP must protect the creative people, to better enable the dissemination of ideas and techniques. The “open source” software movement as well as recent experiments in the diffusion of artistic works exclusively on the Internet show that new approaches are possible without killing business or innovation. But it seems that the fears of the established players outweigh the passion and creative risk-taking culture.

PS: When writing this paper, I had not measured yet the impact of the Apple-Samsung litigation…