I discovered yesterday the new 2008 Academic Ranking of World Universities done by the of , (IHE-SJTU). Again the has the lion share: the top 10 and the top 20. Only the ( and ) and () enter the list. You can assess the ranking in more details with the full 500 ranking if you wish.

When I published “Start-Up”, I had a conversation with Christophe Alix, a journalist at Libération who told me that I forgot one thing in my explanations of the superiority in innovation, i.e. the huge budget of the Pentagon. I certainly do not disagree and address the issue further below with a book I am just reading: 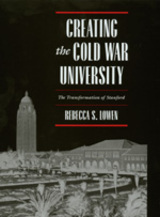 “Creating the Cold War University- The Transformation of Stanford” by Rebecca S. Lowen is an interesting book about how Stanford became wealthy in the 50’s and the 60’s thanks to federal money and industry contracts. Frederick Terman, often credited as being the father of , called it a “Win-Win-Win” situation. The government funded basic and applied research (the difference between the two was often fuzzy) to develop military applications during the Cold War, the industry developed the products from the results of the research (and did not always have to directly fund the research), and companies like H-P, Varian, GE benefited greatly the effort. Finally Stanford became wealthy as well as excellent in research (which it was not in the 30’s).

Lowen explains that “by 1960, the federal government was spending close to $1B for academic research and university-affiliated research centers, 79 percent of which went to just twenty universities, including Stanford, Berkeley, Caltech, MIT, Harvard and the University of Michigan” (page147). In the ranking, Harvard is #1, Stanford is #2, is #3, MIT is #5, Caltech is #6 and #18 only.

Money definitely helps. I had however reacted against Alix’ argument as military money can not explain by itself the entrepreneurial spirit that and developed. Caltech and its JPL laboratory never reached the same start-up activity. But the quality of universities and their wealth is an extremely strong ingredient for successful technology clusters.