Does the crisis have an impact on entrepreneurship. This was the question I was asked by Manuela Salvi on the Swiss Radio (RSR) today. You can listen to my answer (in French) by ckicking here.

Here is my answer in more detail: reality is complex and I am not aware of complete studies on the topic. However the Kauffman foundation has published an interesting report on the topic: Entrepreneurs and Recessions: Do Downturns Matter? 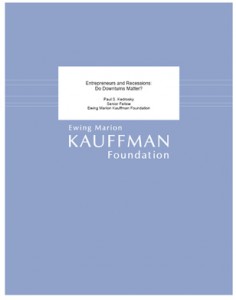 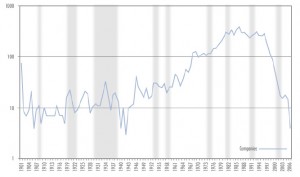 In another study entitled Economic Crisis Survey, the Kauffman foundation shows that 71% of American people believe that “in light of the economic crisis, it has become more difficult to become an entrepreneur in America”. However anecdotes are many which show real success: Texas Instruments, Revlon were started during the Great Depression, Microsoft, Apple during the Oil crisis. Without even talking about company creation, product launch such as Pampers in 1961 and the iPod in 2001 show that a crisis does not prevent innovation.

Here is an extract from the first report:

“At a high level we essentially are concerned with the relationship between the supply of companies (“births”) by founding period, and the outcome achieved by those date-based founding cohorts over time. To deal with this supply aspect, a few broad points can be made. The first is what we might call the scarcity argument. It says that fewer companies are founded during difficult economic times, so we can expect disproportionately fewer successful companies to emerge from that economically constrained population. Why might we expect fewer companies founded during recessions, for example?

There are several reasons. First, entrepreneurs might decide to delay creating companies until the economy into which they anticipate selling products or services is more robust. This argument applies most strongly to entrepreneurs in service industries where there is little lag time from company founding until first product/service sale. If there is a longer lag between company founding and product launch, we might not expect entrepreneurs, all else being equal, to hesitate as much in starting their new ventures. Why? Because first revenues might be anticipated to more likely coincide with a resurgent economy.

There are other reasons to expect fewer companies to be founded during economic downturns. One has to do with entrepreneurs’ unwillingness to leave their current places of employment during a weak economy. Another, and perhaps more compelling, obstacle to company founding in weak economic periods might be the limited availability of risk capital during such periods. To the extent that it is difficult to raise money for a new entrepreneurial venture, we might expect fewer companies founded during such periods.

The preceding touches mostly on supply issues—why we might (or might not) expect more companies to be founded during weaker economic periods. There also is a demand issue. Even if similar numbers of companies are founded, it is plausible that more of these companies do not achieve material financial success due to the poor economy at founding, thus leading to poorer longer-term outcomes for cohorts of companies founded during weak economic periods.

There is therefore some difficulty in assessing the impact. As a way to finish this post, without concluding, let me quote another blog (in French) envie d’entreprendre which explains why an entrepreneur would have a higher likeliness of success in periods of crisis:

“Since financing is more difficult to obtain, those who know how to operate in a low-cost, frugal environment have an edge. Since many people wait and see, even are “frozen”, using the crisis as an excuse not to act or cannot act because of lack of financing, there is less competition. Since there is less competition, the employment market is easier [and more talents are available]. Finally, the fact of being unemployed may be the opportunity to start the entrepreneurial adventure. ”

I like these arguments,
– less competition
– more talents available
– better efficiency because one has to be more frugal.

Periods of recession and crisis seem to create more opportunities but it remains clear that entrepreneurs always try, whatever the difficulty of the times.

11 thoughts on “Entrepreneurship during recession and economic crisis.”