After reading chapters 8 & 9 of Elon Musk and after my recent post about the Tesla and SpaceX leader, I am now fully convinced Elon Musk is much more than Steve Jobs. He has brought back optimism to Silicon Valley, to the USA and maybe to the world. He has also brought back hardware and engineering in a world that was thinking everything was virtual and online. Mea culpa, I felt the same; I felt that software and intelligence was what was driving the world. Elon Musk has shown that tinkering, experimenting coupled with an ambitious vision could change the world. 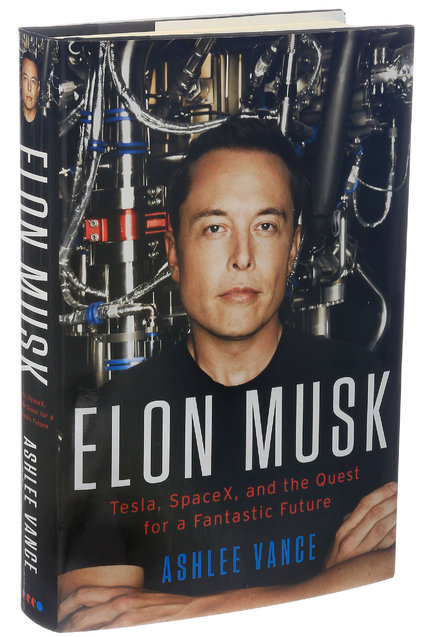 “When the launch was successful [SpaceX 4th launch but the 1st to be successful], everyone burst into tears”, Kimbal said. “It was one of the most emotional experiences I’ve had.” Musk left the control room and walked out of the factory floor, where he received a rock’s star welcome. “Well, that was freaking awesome,“ he said. “There are a lot of people who thought we couldn’t do it – a lot actually – but as the saying goes, ‘the fourth time is the charm’, right? There are only a handful of countries on Earth that have done this. It’s normally a country thing, not a company thing…. [Page 203]

But the reader should not forget the tough reality: For Gracias, the Tesla and SpaceX investor and Musk’s friend, the 2008 period told him everything he would ever need to know about Musk’s character. He saw a man who arrived in the United States with nothing, who had lost a child, who was being pilloried in the press by reporters and his ex-wife and who verged on having his life’s work destroyed. “He has the ability to work harder and endure more stress than anyone I’ve met”, Gracias said. “What he went through in 2008 would have broken anyone else. He didn’t just survive. He kept working and stayed focused.” That ability to stay focused in the midst of a crisis stands as one of Musk’s main advantages over other executives and competitors. “Most people who are under that sort of pressure fray,” Gracias said. “their decisions go bad. Elon gets hyperrational. He’s still able to make very clear, long-term decisions. The harder it gets, the better he gets. Anyone who saw what he went through firsthand came away with more respect for the guy. I’ve just never seen anything like his ability to take pain”. [Page 211]

Again, Musk is not afraid of risk-taking. As 2008 came to an end, Musk had run out of money […] The couple had to start borrowing hundreds of thousands of dollars from Musk’s friend Skoll and Riley’s parents offered to remortgage their house. Musk no longer flew his jet back and forth between Los Angeles and Silicon Valley. He took Southwest. [Pages 206-207] He manage to save Tesla, The deal ended up closing on Christmas Eve, hours before Tesla would have gone bankrupt. Musk had just a few hundred thousand dollars left and could not have made payroll the next day. […] On December 23, 2008, however, SpaceX received a shock. People inside NASA had backed SpaceX to become a supplier for the ISS. The company received $1.6 billion as payment for twelve flights to the Space Station. [Page 210]

It is also interesting to mention Musk’s hiring methods! The SpaceX hiring model places some emphasis on getting top marks at top schools. But most of the attention goes toward spotting engineers who have exhibited type A personality traits over the course of their lives. The company’s recruiters look for people who might excel at robot-building competitions or who are car-racing hobbyists who have built unusual vehicles. The object is to find individuals who ooze passion, can work well as part of a team, and have real-world experience bending metal. “Even if you’re someone who writes code for your job you need to understand how mechanical things work. We were looking for people that had been building things since they were little.” [Page 220] Interviews are tough with puzzles, code writing and Musk interviewed the first 1’000 employees de SpaceX.

I am far from finished but needs to end up for now with my usual cap. tables for Musk’s ventures: 1-Paypal, 2-Tesla Motors, 3-SolarCity which he did not found but backed from the early days and the two founders are his cousins, 4-finally a tentative cap. table based on what SpaceX announced. 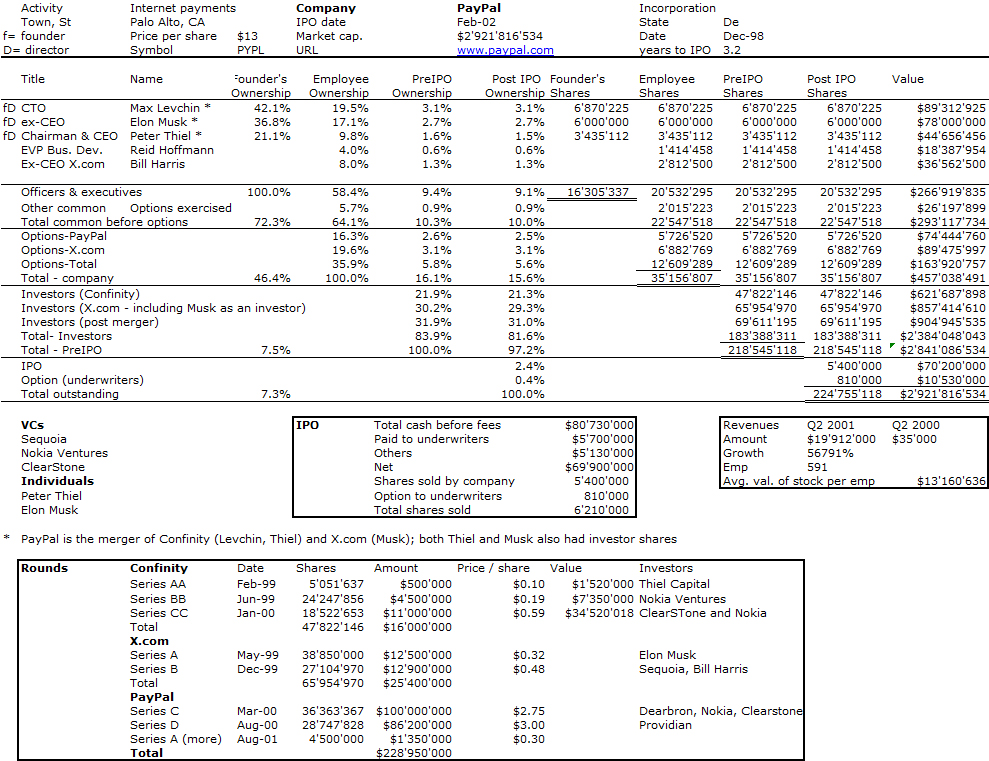 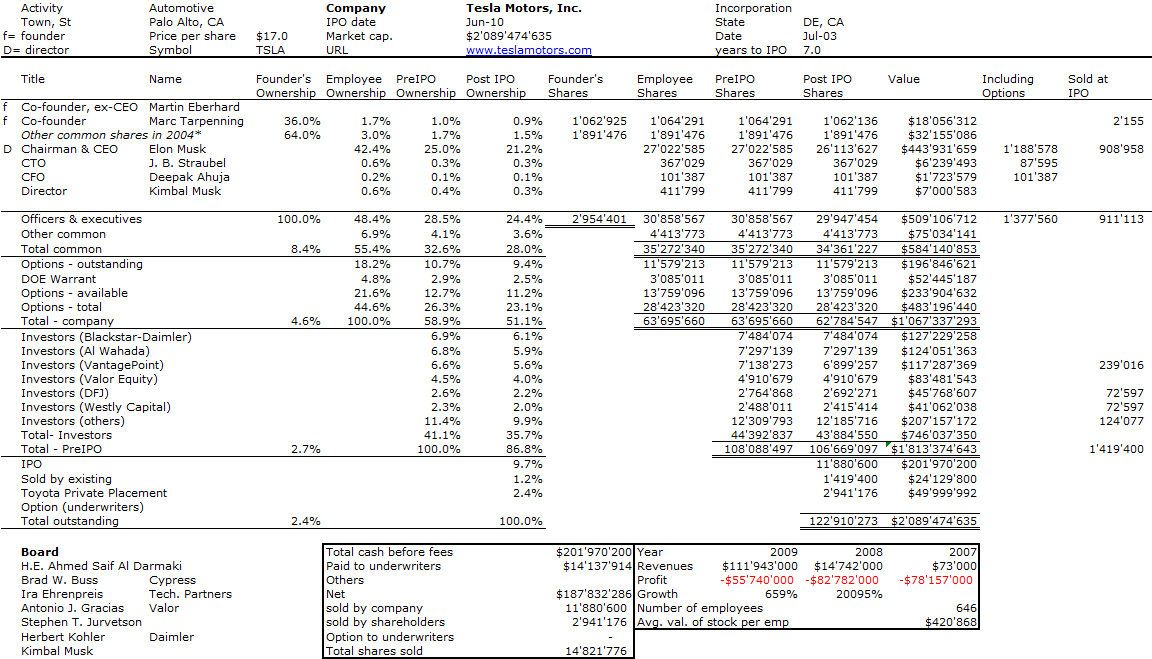 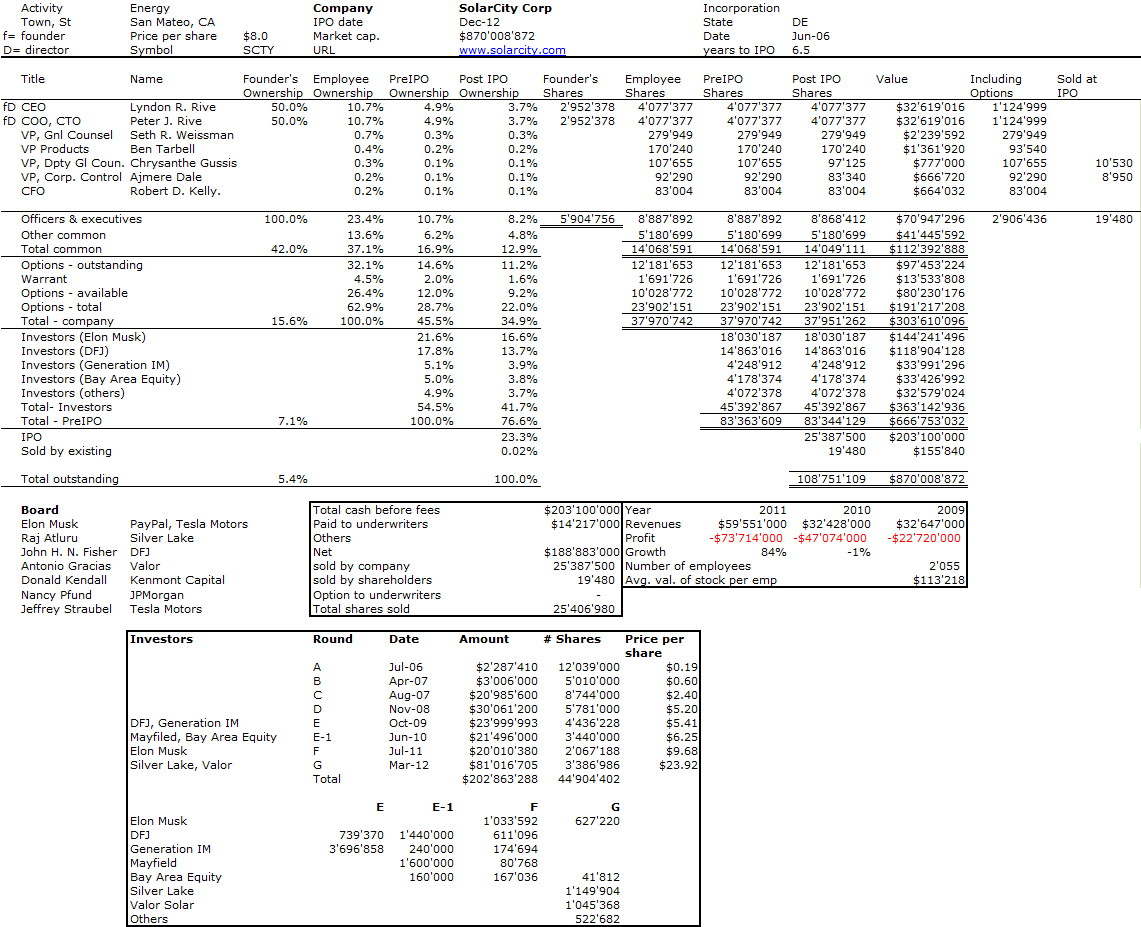 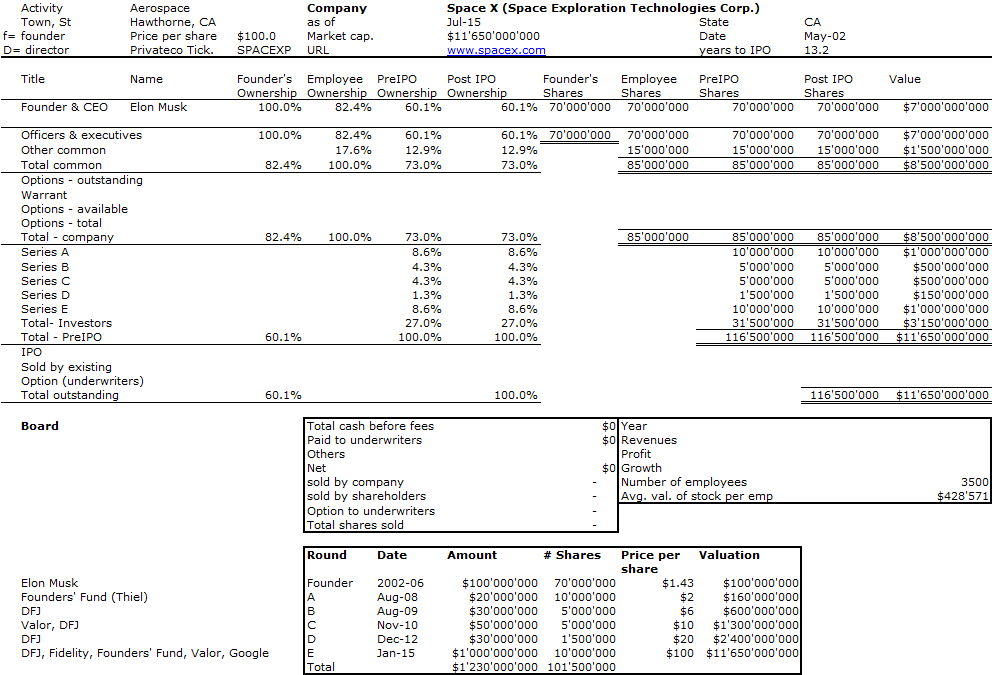