Occasionally, I write a short post that has nothing to do with the start-up. Well maybe it has… I was listening this morning France Culture which invited the philosopher André Comte-Sponville. At time 8:13 of the video below starts a sequence about transhumanism that the philosopher then comments. I also put it in writing below. I already had the opportunity to discuss the topic thanks to another edition of the same excellent program, on May 9, 2014: Ray Kurzweil has mostly wrong predictions.

To the question “André Comte-Sponville, will you take the bus to immortality”, he answers:
“No thanks! This is obviously excluded. Well more seriously some people predict, I think of Laurent Alexandre, that we will soon live 1’000 years. And his book is called The Death of Death. This is obviously a nonsense. Because, whether you die in 90 years or a thousand years, you would still die. We would live more but we would still die. As for the crazy idea, I would say, of suppressing death, again, it is an impossibility. No body, no living body can resist combustion, can resist drowning. If you spend 15 days under water, I swear that transhumanism or not, you’re dead. No human being survives a bullet in the forehead. In other words, even it happened, and God knows tomorrow is not the day, it is science fiction, but even if it happened that we win over every disease and aging, in other words we would only die by accident, well, sooner or later, because with infinite time, everything possible necessarily happens, we would have an accident and we would end up dying anyway. Simply, what would happen, as we would only die by accident, we would indeed perpetually be scared to death. What allows me to take my car today is that I know anyway that I will die and therefore dying of cancer or of a car accident, basically the difference is not essential. If I can die only by accident or murder, I’ll be perpetually scared to death. In short it will make a society of old human beings who will not have children as it would be terrible overcrowding, a society of old and coward human beings. Well that is not my ideal of a civilization or of humanity.
– So, does transhumanism scare you?
– No, again this is science fiction. That science and technology are becoming more and more present in our lives, that they may one day change human nature, that’s true. It is not there yet, but it can come and so it is legitimate to think about it. I want to say that urgent problems are elsewhere. We will be nine billion and a half, maybe ten billion in 2050, nobody knows how we will feed ten billion people. The issue of freshwater and arable land, the issue of global warming are far more pressing issues that the issue of transhumanism. 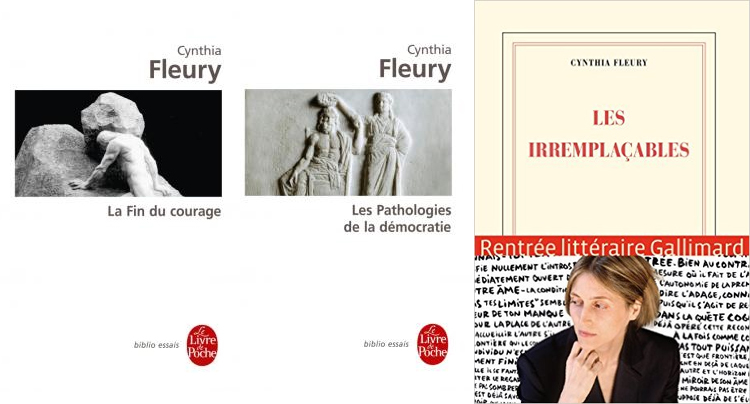 I change (slightly) the topic again. Here are books of another French philosopher whose clarity of thought and vision are exceptional. A must read. The world of start-up also needs courage, ethics and moral philosophy. Cynthia Fleury explains beautifully why any individual and any aociety also needs them… The lies of transhumanism and of societies and of individuals too must be fought!