I must say that last week I did not understand very well the “Industry 4.0” concept. And after a brief stay in Munich this week – where I had an explanation by E&Y – see below – but especially after reading the text of a speech entitled “Smart Industry 4.0 in Switzerland” (see pdf) given by Matthias Kaiserswerth, the “Business and Innovation Forum Slovakia – Switzerland” in Bratislava on June 20, I fully understood the importance of the subject. I also found out this morning two excellent reports: “Industry 4.0 – The role of Switzerland Within a European manufacturing revolution” (see pdf) by the firm Roland Berger and the “Digital Vortex – How Digital Disruption Is Redefining Industries’ (see pdf) published by Cisco and IMD. I got permission from Matthias Kaiserswerth to publish his speech here (I thank him for this) and this speech is an excellent introduction to the subject with many interesting ideas to solve the challenges ahead…

In this brief input speech, I want to talk about some of the challenges and opportunities that the on-going digitalization has for the Swiss economy, our labor force and the education system.

Unfortunately, Switzerland is not yet a leader in digitalization. When we compare ourselves with other OECD countries, we play at best in the middle field. From a policy point of view, we are behind the European Union. This month, June 7, our Ständerat, the smaller parliamentary chamber representing the cantons, has asked our government to analyze what economic effect the emerging EU single digital market will have on our country. Our current president, the minister for economy, education, and research in his response admitted that until the beginning of this year Switzerland had underestimated the 4th industrial revolution and now is trying to catch up with various measures[1].

ICTSwitzerland, the association of the Swiss ICT industry, earlier this year launched a scorecard [2] digital.swiss in which they rate Switzerland’s state of digitalization in 15 dimensions. While we have excellent basic infrastructure and rank highly on a generic international competitive index, we don’t yet sufficiently leverage digital technologies in the various sectors of our economy. 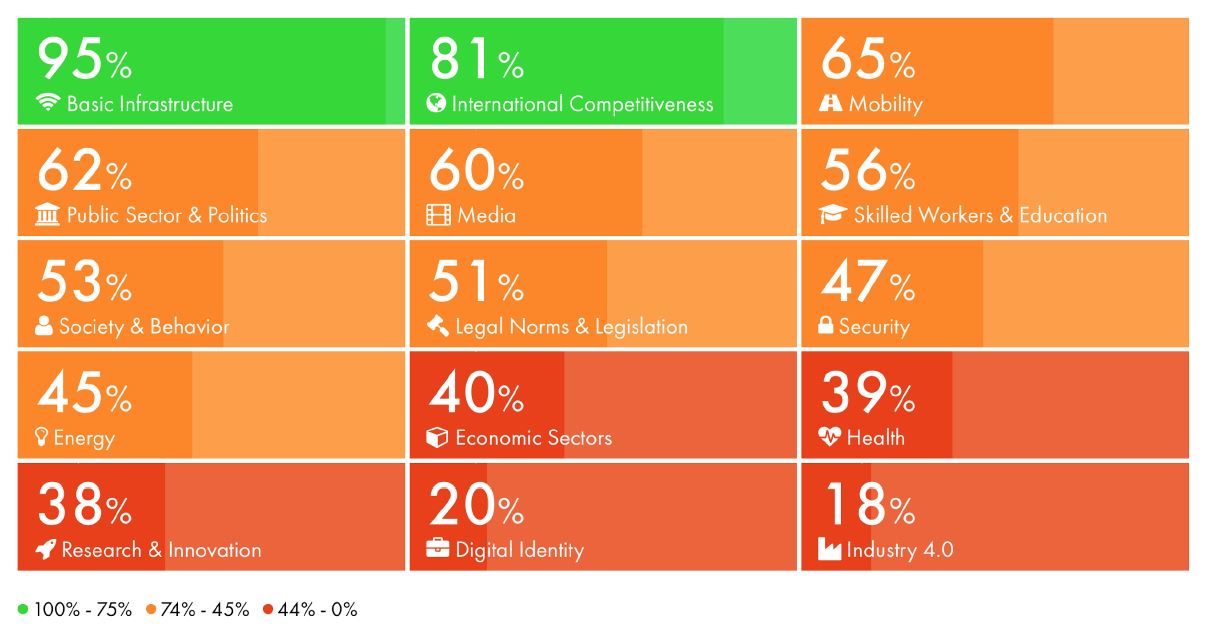 The scorecard reflects a classic Swiss paradox. Because of our very direct democratic system, built on subsidiarity, we provide good infrastructure and general economic framework. When it comes to leveraging these foundations, we leave it to private initiative as we don’t pursue an active industrial policy – certainly not at the federal level. So far our companies – mostly SMBs, 99.96% of our companies have less than 250 employees – have excelled at incremental innovation. Incremental innovation can be good for a long time, but it impedes dealing with major technology shifts that can disrupt an entire industry.

This happened in the 70s and early 80s when the “Quartz Revolution” almost extinguished Swiss watchmaking. Now again history may repeat itself as the watch industry missed or were too slow to embrace the trend towards smartwatches. Apple within the course of only one year managed to surpass with their watch-related revenues all Swiss watch companies even Rolex [3].

With the digital revolution, driven out of Silicon Valley, we compete with an entirely different innovation model, namely disruptive innovation.

Just look at examples from the sharing economy such as Airbnb and Uber.

But it doesn’t stop there. Consider computer companies now building the future self-driving electric car – Google being a prime example. While European OEMs had experimented for a long time with self-driving cars putting all the intelligence into the car, Google took an entirely different approach. Because of their maps, their work with Streetview, they already have very precise information about where the car is going and thus can leverage the power of connectivity and the cloud as well.

While we would strive to build the perfect battery for an electric car, Tesla took what we would consider inferior laptop batteries and leveraged IT to make them useful in their cars.

With the long Swiss tradition of bringing foreign talents into the country and allowing them to succeed, we have an outstanding opportunity not to miss out on the current industrial revolution. Many of our successful international companies got started by foreigners – just think of Nestle, ABB, or Swatch.

Businesses have now realized that meeting the pressures of the strong Swiss Franc with only cutting costs is insufficient. They are looking for different forms of innovation leveraging IT. About a year ago, various Swiss industry associations launched an initiative “Industry 2025” to change the mindset in our machine industry and alert them to the new opportunities [4].

For example in 2012, Belimo a company producing actuator solutions to control heating, ventilation and air conditioning systems launched their “Energy Valve”. It consists of a 2-way characterized control valve, volumetric flow meter, temperature sensors and an actuator with integrated logic, that combines the five functions of measuring, controlling, balancing, shutting and monitoring energy into a single unit with its own web server as IT interface. The intelligent valve can be used to optimize water flow in heating and cooling systems and yields significant energy savings for its customers [5].

Other companies in the Swiss machine industry have started to think about how they can leverage Internet of Things (IoT) to create new businesses based on the data that their machines generate. A good example is LCA Automation, a company in the business of building factory automation solutions. They want to offer predictive maintenance based on dynamic condition monitoring of their installed factories. Leveraging existing information like current and position from frequency converters in their drives help understand how the machines are used. In select cases they install additional sensors to measure vibration, acoustic noise to allow their clients to schedule maintenance instead of running their installations to failure [6].

In my opinion, the challenges in addressing more of these opportunities are (1) cultural, (2) an IT skills gap, (3) finding and realizing new business models that best exploit the digital opportunity and finally (4) creating an environment where collaboration with external partners can let you innovate with speed.

Contrary to software, industrial products cannot be easily updated in the field, they are engineered to last 10 to 20 years. The mindset of the computer scientist: “we can fix it remotely with an update,” requires the mechanical and electrical engineers to rethink how they construct their systems. When Tesla had issues in 2013 with one of their cars catching fire because its suspension at high speeds lowered the car too close to the road, they did not issue a massive recall but instead remotely overnight changed the software in the cars to guarantee a higher distance between car and road.

Getting these diverse cultures to collaborate requires respect among the different professional disciplines and would call for the occasional computer scientist to serve on the board of industrial companies to challenge their established way of thinking.

Implementing new business models that exploit the digital opportunities is a significant challenge for established industrial companies. If a company whose core business is selling industrial machines, wants to start offering value added subscription based services to optimize the industrial process realized by their products, they get into an entirely new business. They will need to decide whether these services are only available for a process realized by only their machines or whether they want to offer it also on competitors’ installations. They need to devise a new sales incentive scheme based on a recurring revenue stream. They need to build a support infrastructure that matches the optimized process and no longer consists of experts that only know about their own machine. In short, they need to build an entirely new business. Doing so inside an established large company is extremely hard maybe even more so than doing it in an external startup.

Finally, creating a collaborative environment with external partners to innovate with speed is not something unique to the age of digitalization, however it will be key for industrial companies to capture the opportunity. In spite of the good examples from large industrial companies like Procter and Gamble around Open Innovation, a concept coined 13 years ago, many firms still have a strong sentiment of doing everything themselves or with their established supply chain partners. In the case of digitalization, however, new partners from outside the traditional industry need to be involved and made part of the solution. “Rather than using their own R&D budget, enterprises can leverage venture capitalist investments and integrate a technology solution in an accelerated timeframe” [7].

Before I close, let me get back to education, a topic of particular importance in this new era. Switzerland has an excellent education system. However, we have a significant shortage of students that pursue a career in the Science Technology Engineering and Mathematics field (in short STEM) in addition to a skills gap in STEM for all the other students.

In 2014, the German speaking cantons launched a new common competence oriented curriculum “Lehrplan 21” (LP21) to address the skills gap by putting more focus on STEM subjects. For example, by introducing a new subject called Media and Informatics, the cantonal education ministers have accepted the notion that all students need basic skills in computer science to succeed in the professional or academic education system. As we speak, this LP21 is being implemented in the German speaking part of Switzerland, albeit not fast enough for my taste.

To succeed with LP21 we also need to qualify the teachers to competently teach these subjects in a way that keeps all students motivated. Specifically female students have a significantly lower self-perception in how they master technology and what they can use technology for [8]. The consequence is that we lose the female talent also in our workforce. So for example, in IT there are only 13% women in the Swiss workforce.

Promoting women in technology as role models and broadening specific programs to get girls interested in technology at a primary school age will hopefully help to bridge the gender gap in the long run.

When we look at the system of the Federal Polytechnic Schools (ETH Zurich and EPF Lausanne), the universities and specifically also the universities of applied science, government funding for research then we have an outstanding foundation upon which we can build to effectively compete in this 4th Industrial Revolution. It now requires a new mind set for our industrial companies to embrace the emerging IoT, Big Data, and artificial intelligence trends and the courage to experiment with the new business models that they enable.

Postscript: I mentioned above the presentation by E&Y, here is the slide that struck me… 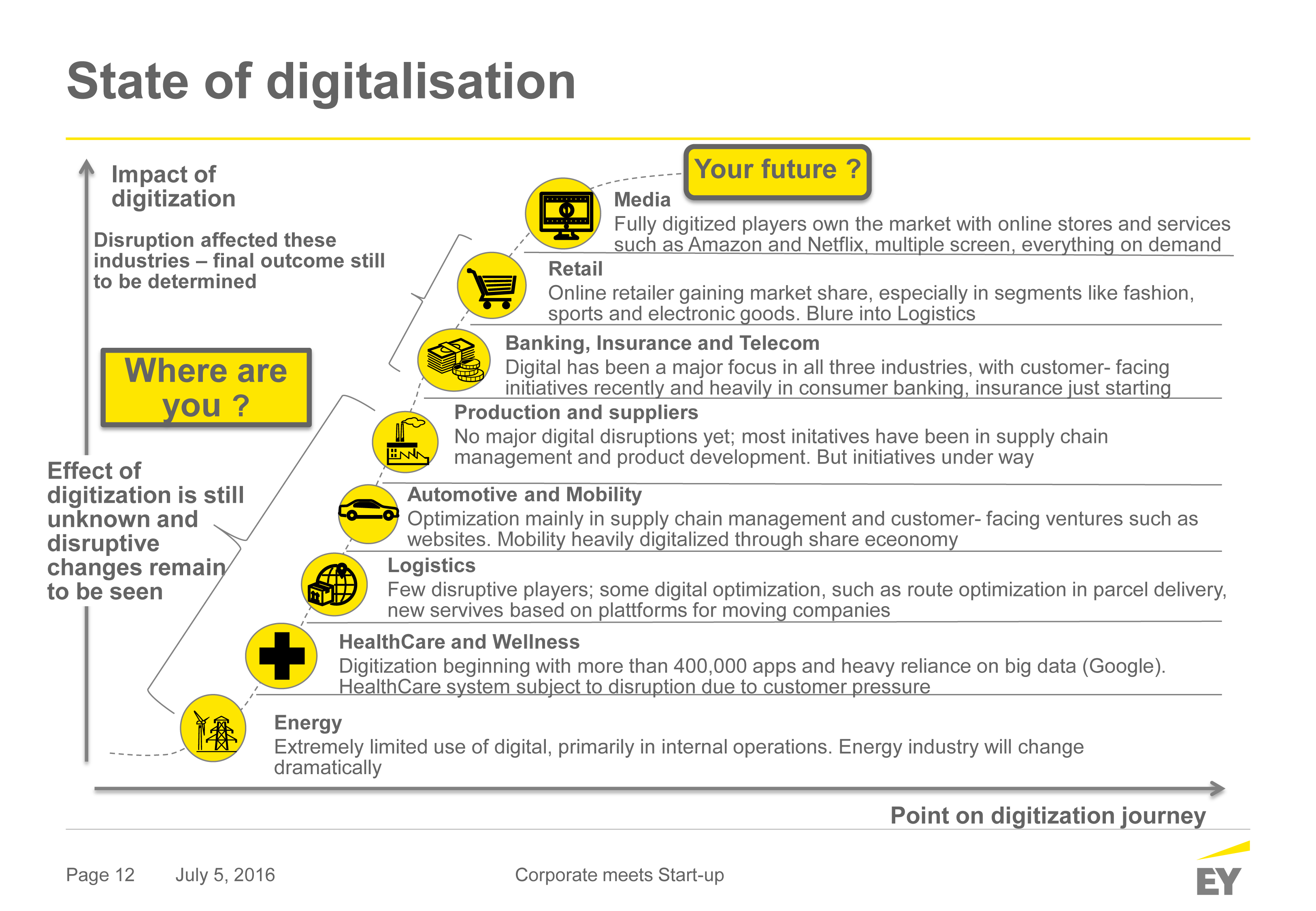