Every year I try to convey what I believe to be the beauty of mathematics when I teach convex optimization at EPFL. I have already mentioned on this blog some beautiful books, popularizing the subject. Some recent readings have convinced me even more so let me try to convince you (again)… 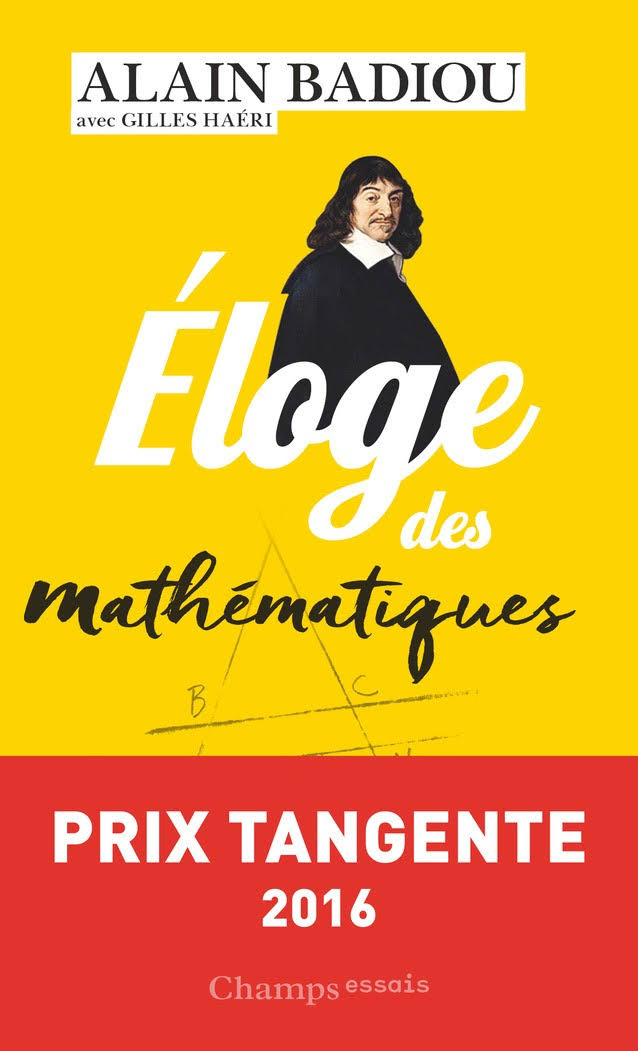 Alain Badiou is a rather surprising choice to talk about mathematics but I love what he has recently written: “This quasi aesthetic feeling of mathematics struck me very early. […] I think of Euler’s line. It was shown that the three altitudes of a triangle are concurrent in a point H, it was already beautiful. Then that the three vertices were also concurrent, at a point O, better and better! Finally, that the three medians were equally so, at a point G! Terrific. But then, with a mysterious air, the professor told us that we could demonstrate, as the brilliant mathematician Euler had done, that these points H, O, G were in addition all three on the same line, which evidently was called Euler’s line! It was so unexpected, so elegant, this alignment of three fundamental points, as behavior of the characteristics of a triangle! […] There is this idea of a real discovery, a surprising result at the cost of a journey sometimes a little difficult to follow, but where one is rewarded. I often compared mathematics later to walking in the mountain: the approaching walk is long and painful, with a lot of turning, slopes; we think we have arrived, but there is still a turning point … We sweat, we struggle. But when we arrive at the pass, the reward is unequaled, truly: this gratification, this final beauty of mathematics, this surely conquered, absolutely singular beauty.” [Pages 11-12] 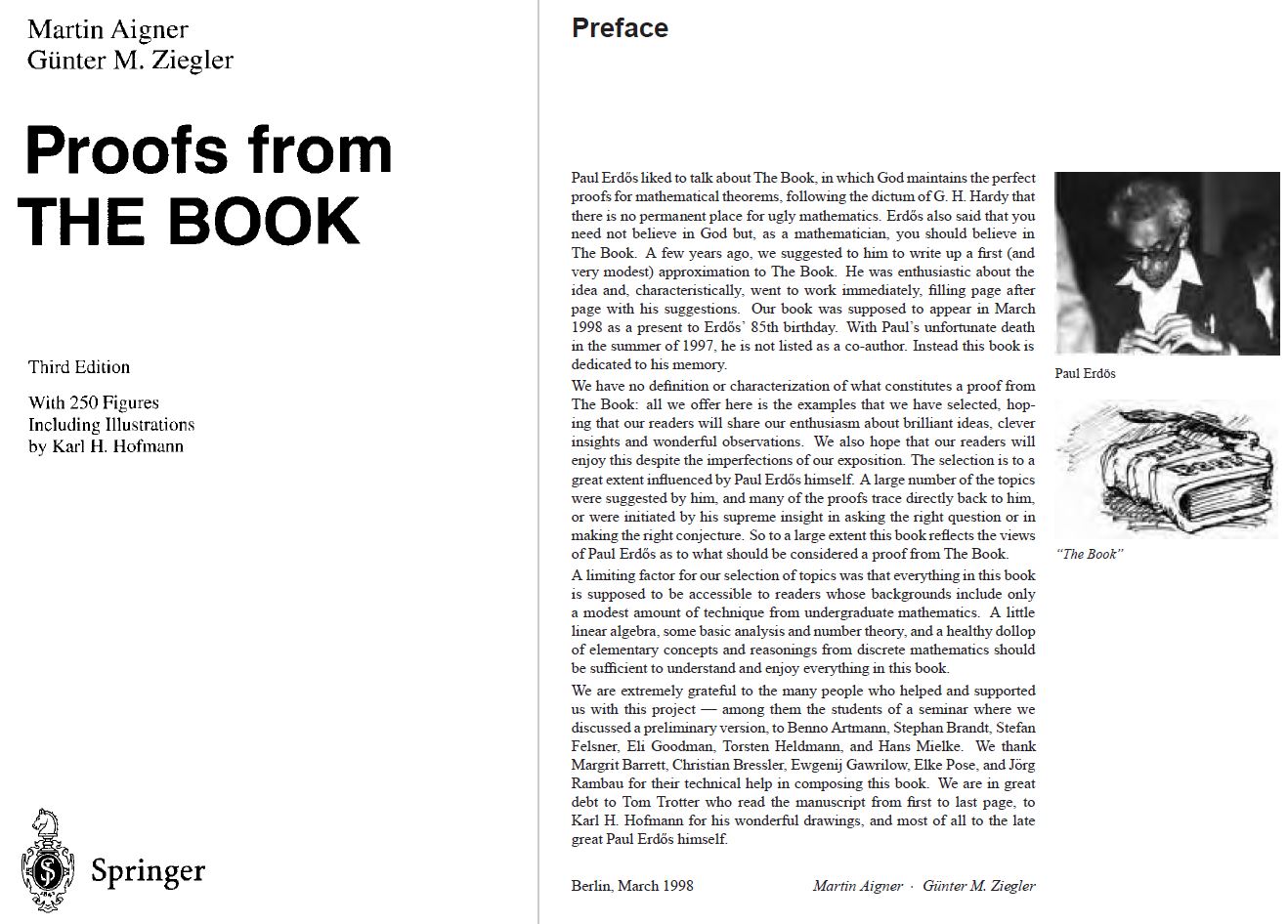 Another source of inspiration is Proofs from THE BOOK. Written in homage to Paul Erdös, the book begins with the two pages shown above. “Paul Erdös liked to talk about The Book, in which God maintains the perfect proofs for mathematical theorems, following the dictum of G. H. Hardy that there is no permanent place for ugly mathematics. Erdös also said that you need not believe in God but, as a mathematician, you should believe in The Book. […] We have no definition or characterization of what constitutes a proof from The Book: all we offer here is the examples that we have selected, hoping that our readers will share our enthusiasm about brilliant ideas, clever insights and wonderful observations.”

Sometimes I try to remember the most beautiful demonstrations I have “felt” since my high school years.

– The most luminous, the proof of the sum of the n first integers by Gauss

– Two demonstrations of the Pythagorean theorem, 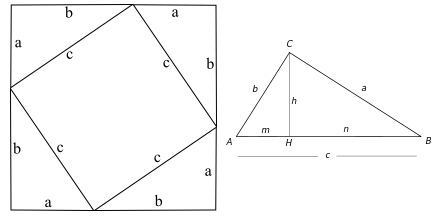 – There would be many others like the infinity of prime numbers, the development in series of Π (

), the beautiful concept of duality for convex sets (you can look at a set through its “internal” points or through the dual “external” envelope made of its tangents).

– But the most fascinating for me, remains the use of Cantor’s Diagonal:

In his 1891 article, Cantor considered the set T of all infinite sequences of binary digits (i.e. each digit is zero or one). He begins with a constructive proof of the following theorem:

If s1, s2, … , sn, … is any enumeration of elements from T, then there is always an element s of T which corresponds to no sn in the enumeration.

To prove this, given an enumeration of elements from T, like e.g.

By construction, s differs from each sn, since their nth digits differ (highlighted in the example). Hence, s cannot occur in the enumeration.Based on this theorem, Cantor then uses a proof by contradictionto show that:The set T is uncountable.

But let me add another extract from Badiou (page 82): “I call truths (always in the plural, there is no “truth”) singular creations of universal value: works of art, scientific theories, policies of emancipation, love passions. Let us say to cut short: scientific theories are truths concerning the being itself (mathematics) or the “natural” laws of the worlds of which we can have an experimental knowledge (physics and biology). Political truths concern the organization of societies, the laws of collective life and its reorganization, all in the light of universal principles, such as freedom, and today, principally, equality. The artistic truths relate to the formal consistency of finite works that sublimate what our senses can receive: music for hearing, painting and sculpture for vision, poetry for speech … Finally, the love truths concern the dialectical power contained in the experience of the world not from the One, from the individual singularity, but from the Two, and thus from a radical acceptance of the other. These truths are not, of course, of philosophical origin or nature. But my goal is to save the (philosophical) category of truth that distinguishes and names them, legitimizing that a truth can be:
– absolute, while being a localized construction,
– eternal, while resulting from a process which begins in a certain world and therefore belongs to the time of this world.”