The word Start-up is controversial. Money, business are often the synonymous and at the time of the Paradise Papers, they do not have good press, with reason! I sometimes had to “defend” and I would still defend a world that is important … And more widely, I believe, we must fight to defend the importance of facts and a “dirty word”, truth, with courage. In a world where communication is confused with information (already at the beginning of the 20th century, Schumpeter explained that capitalism could not exist without marketing and advertising) it is important that the voices defending the facts, truth with courage be heard. For this reason, I have sometimes come out of the strict framework of technology, innovation and high-tech entrepreneurship to mention intellectuals who seem important to me. Harari, Piketty, Fleury, Stieger, Picq.

A long introduction to mention a beautiful interview of Pascal Picq on France Inter this morning: “We must deconstruct male domination in Hollywood as elsewhere.” The link to the site in French is here. A brief excerpt: “Note: the bonobos, who are close to us, have not evolved like us. Homo sapiens is one of the most violent species towards its females, so women. The degrees of this violence vary according to time and culture. The dominant status is exercised with regard to Nature on the one hand, and women on the other hand. The behaviors of male dominance that are rooted in our human societies are the result of a behavioral evolution, and not of a natural and genetic determinism. In the bonobos, the female is dominant, the violence of the relations is mastered by the hedonic relations, and the bonobos live according to a model of gynocracy. The bonobos and the men did not have the same behavioral evolution. And I say that we can not blame our nature, as some do, in the principles of male dominance that have been imposed on humans. It is a behavioral evolution that has become embedded in agricultural societies and industrial societies. Historically, where foods or things are produced, men tend to take control of production and reproduction.”

I should have added that this interview is related to the Oscar granted last night to Agnès Varda for her career and coincidence or not, my previous article in French only – If you do not love me, I can tell you that I do not love you either – dealt with Sandrine Bonnaire, the actress of Agnes Varda in the magnificent Vagabond.

In all disciplines, scientific or not, complexity makes it difficult sometimes, not to say often, to assert truths. They seem sometime to be moving. But there are facts that one must always analyze as honestly as possible with courage and then we can come out with truths. Thanks to these intellectuals who work without dogma and help us understand the world.

And to finish on a “lighter” touch, here are two works by Obey whose artistic fight is magnificent! 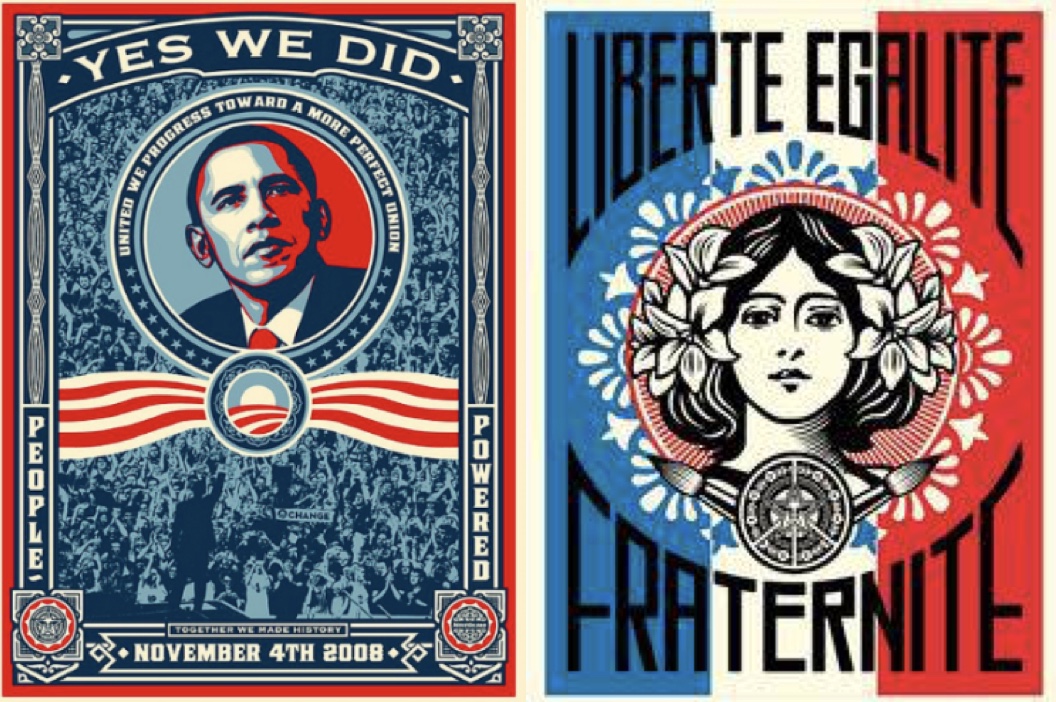