It took me a while to read Bock’s book. It is dense, ambitious, convincing, despite the fact that “Google sounds too good to be true” [Page 318]. There would be so much to say and the diversity of topics addressed by Bock is so broad. If you deal with people, if you manage teams, I think you should read it (I do not manage people and still I think it will be immensely useful to me!).

Another example after my four posts: Bock mentions of of McKinsey values: “uphold the obligation to dissent” [Page 319]. And an example follows on the same page: I was serving a client whose merger was yet to prove disastrous. The client asked for a recommendation on how best to set up a venture capital business. The data were pretty clear. Aside from a few notable examples, like Intel Capital,most corporate venture-capital efforts were failures. they lacked the expertise, clarity of purpose, and physical proximity to where the most lucrative deals were being hatched. I told the senior partner it was a bad idea. I showed him the data. I explained that there were almost no examples of these kinds of efforts being successful, and none that I could find that were thousands of miles outside of Silicon Valley and run by people who lacked any engineering background.
He told me that the client was asking how to set it up, not whether to to set it up, and that I should focus on answering the client’s question.
Perhaps he was right. Or perhaps he had some superior insight into the issue that trumped my data, Maybe he’d already made that argument to the client, and they’d rejected it.
But to me it felt like I’d failed.I thought the obligation to dissent required me to speak up, so it was all the more gut-wrenching to see my concern brushed aside. 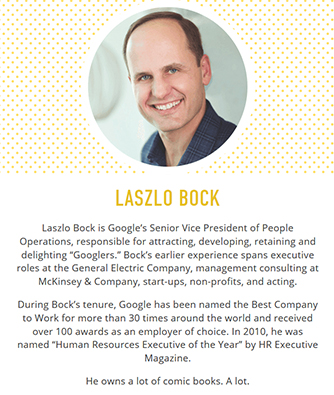 Again Google might sound too good to be true, but this is the 5th or 6th book I read about Google from insiders and from outsiders, and the messages are quite consistent. A final quote from page 339: In the introduction I posited that there are two extreme models of how organizations should be run. The heart of this book is my belief that you can choose what type of organizations you want to create, and I’d be shown you some of the tools to do so. The “low-freedom” extreme is the command-and-control organization, where employees are managed tightly, worked intensely, and discarded.The “high-freedom” extreme is based on liberty, where employees are treated with dignity and given a voice in how the company evolves.
Both models can be very profitable, but this book presumes that the most talented people on the planet will want to be part of a freedom-driven company. And freedom-driven companies, because they benefit form the best insight and passion of all their employees are more resilient and better sustain success.