I had mentioned Grigori Perelman in a rather old post: 7 x 7 = (7-1) x (7+1) + 1. I discovered recently a new book about this exceptional mathematician, not so much about his achievements but more about his personality. 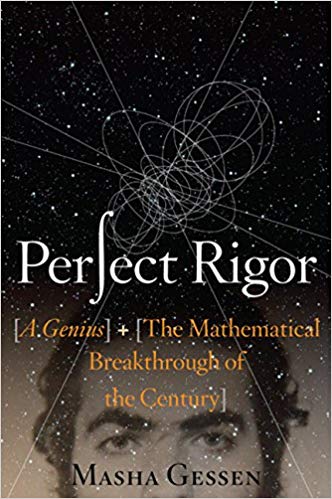 I will not tell much Perelman here, Masha Gessen does it with talent. Let me just translate here form the French version I am reading: “It seems to me that many of the whistleblowers,” wrote Atwwod, “have Asperger’s Syndrome, I’ve met several who have applied the code of ethics of their company or government to their work and have reported wrongdoing and corruption in the workplace. All of them were surprised to see that their management and their colleagues did not understand their attitude. ”
So it is perhaps not a coincidence that the founders of dissident movements in the Soviet Union were among mathematicians and physicists. The Soviet Union was not the place for people who took things literally and expected the world to work in a predictable, logical and fair way. [Pages 215-6, French edition]
[…]
One can also interpret the difficulties he experienced when he presented his solutions. If Perelman was suffering from Asperger’s syndrome, this inability to see “the big picture” is perhaps one of the most surprising traits. British psychologists Uta Frith and Francesca Happe talked about what they call the “low central coherence” characteristic of autism spectrum disorders. Autistics focus on details, to the detriment of the overall picture. When they manage to reconstitute it, it is because they have arranged the various elements, a little like the elements of the periodic table, in a systemic scheme that satisfies them to the extreme. “… the most interesting facts, wrote Poincaré, one of the greatest systematizing minds of all time, more than a century ago, are those who can be used many times, those who have a chance to happen many times. We have had the good fortune to be born in a world where there is are many; suppose that instead of sixty chemical elements we have sixty billion, that they are not common ones and rare ones, but they would be evenly distributed, so every time we pick up a new pebble, there would be a high probability that it would be made up of some unknown substances… […] In such a world, there would be no no science, perhaps no thought and even life would be impossible because evolution could not have developed the conservative instincts; thanks to God it is not so.”
People with Asperger’s syndrome apprehend the small pebble world by small pebble. Speaking of the existence of this syndrome in society, Attwood resorted to the metaphor of a five thousand-piece puzzle, “where normal people would have the full image on the lid” which would allow them to have global intuitions. Aspergers, they would not see this big picture and should try to nest the pieces one by one. So maybe rules like “never take off your hat” and 2lis all the books that are on the list “formed for Gricha Perelman a way to see the missing image on the lid, to encompass all the elements of the periodic table of the world It was only by clinging to these rules that he could live his life. [Pages 217-8, French edition]

Another interesting topic addressed by Misha Gessen is on page 236 of the French edition again:
– When he received the letter from the commission that invited him he replied that he did not speak with committees, said Gromov, and that is exactly what he did. They represent everything that one should never accept. And if this attitude seems extreme, it is only in relation to the conformism that characterizes the world of mathematics.
– But why refuse to talk to committees?
– We do not talk to committees, we talk to people! exclaimed Gromov, exasperated. How can we talk to a committee? Who knows who is on the committee? Who tells you that Yasser Arafat is not one of them?
– But he was sent the list of members, and he continued to refuse.
– The way it started, he was right not to answer, Gromov persisted. As soon as a community begins to behave like a machine, all that remains to do is to cut ties, and that’s all. The strangest thing is that there is no longer a mathematician who does the same. That’s what’s weird. Most people agree to deal with committees. They agree to go to Beijing and receive a prize from President Mao. Or the king of Spain, anyway, it’s the same!
– And why, I asked, could not the King of Spain have the honor of hanging a medal around Perelman’s neck?
– What is a king? Gromov asked, totally furious now. Kings are the same morons as the Communists. Why would a king award a medal to a mathematician? What allows it? It is nothing from a mathematical point of view. Same for the president. But there is one who has taken control of power like a thief and the other who inherited it from his father. It does not make any difference.
Unlike them, Gromov explains to me, Perelman had made a real contribution to the world.

It reminds me of a colleague’s quote: “There are not many statues for committees in public parks.”

It’s also worth mentioning here an article from the New Yorker that Gessen mentions too: Manifold Destiny. A legendary problem and the battle over who solved it by Sylvia Nasar and David Gruber. On a related topic, the authors quote Perelman whom they met: He mentioned a dispute that he had had years earlier with a collaborator over how to credit the author of a particular proof, and said that he was dismayed by the discipline’s lax ethics. “It is not people who break ethical standards who are regarded as aliens,” he said. “It is people like me who are isolated.” We asked him whether he had read Cao and Zhu’s paper. “It is not clear to me what new contribution did they make,” he said. “Apparently, Zhu did not quite understand the argument and reworked it.” As for Yau, Perelman said, “I can’t say I’m outraged. Other people do worse . Of course, there are many mathematicians who are more or less honest. But almost all of them are conformists. They are more or less honest, but they tolerate those who are not honest.”