About 15 years ago, I was challenged by a colleague, who knew my passion about Silicon Valley, about why the region should survive and lead for the years or even decades to come. I had just arrived at EPFL and now that I am leaving this place where there are many people I love, I could give the same answer to my colleague: the talent and capital gathered there, with an expertise which seems to be never lost and an appetite for experiments and risk with not too much fear of failure, at least no stigma, are reasons why Silicon Valley has a bright future. Yes it has many drawbacks and weaknesses, but even when there is a major crisis, there is stil, whatever we think, enough diversity to continue to strive.

Margaret O’Mara probably thinks the same. At least she has written one of the most comprehensive history of the region and describes brilliantly all its strong and weak, positive and negative attributes. 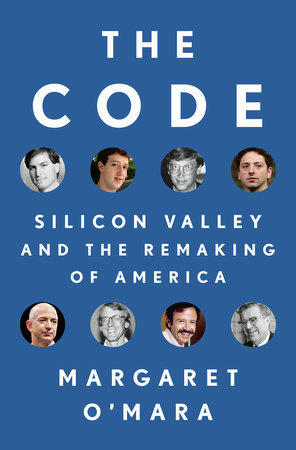 You have to think of it like a horse race, Morgenthaler would explain. That’s how the high-tech game worked. The horse was the technology. The race was the market. The entrepreneur was the jockey. And the fourth and last ingredient was the owner and trainer – the high-tech investor. You could have the best jockey, but if he rode a slow horse, then you wouldn’t win. Same thing if you have a fast horse but a terrible jockey. Great technology without good people running the shop wouldn’t get very far. And the race had to have good stakes. Riding a fast horse to win at the country fait wouldn’t reap many rewards, but the Kentucky Derby was another matter indeed. So it went with the market. These needed to be customers and growth, not saturation. [Pages 11-12] (You can check the Computer Museum archive about Morgenthalerhere (as a pdf).)

The flow wasn’t about transfer of technology, it was about talent – about people who moved back and forth from the labs of Stanford to the offices of its research park to the ramshackle warehouses and prefab office buildings that began stretching southward down El Camino Real. Everywhere else in the 1950s, academia was a true ivory tower, surrounded by impregnable walls between town and gown, between “pure” research and business enterprise. At Stanford, those walls dissolved. [Page 32]

“Good ideas and good products are a dime a dozen,” [Arthur Rock] later explained. “Good execution and good management – in a word, good people – are rare.”

More controversial maybe is John Doerr’s comment: Much later, one of the regions most successful and influential VCs, John Doerr, got in hot water after admitting that a major factor guiding his decisions was “pattern recognition.” The most successful entrepreneurs, he found, “all seem to be white, male, nerds who’ve dropped out of Harvard or Stanford and they absolutely have no social life. So when I see that pattern coming in”, he concluded, “it was very easy to decide to invest.” [Page 76]

After HP went public in November 1957, fortunes rose along with its share price. Yet from the start, the two founders consciously presented their firm as a business concerned with higher and better things. “I think many people assume, wrongly, that a company exists simply to make money,” Packard once told HP managers. “While this is an important result of a company’s existence, we have to go deeper to find the real reasons for our being.” Nonhierarchical, friendly, a change-the-world ethos paired with an unflagging focus on market growth and the bottom line – HP created the blueprint for generations of Silicon Valley companies to come. [Page 33]

The missile maker, the entrepreneurial university, the distinctive business sensibility, the professional networks, the government money, the elite (and homogeneous) workforce: many of the key ingredients were coming together in Palo Alto by the middle of the 1950s. [Page 38]

O’Mara combines anecdotes, stories and economic trends. For example, more than 500 companies went public in 1969. Only 4 did in 1975. […] in 1969, the national venture capital industry had raised more than $170 million in new investment. In 1975, it raised a paltry $22 million. What’s more, only one venture investment in four went to tech companies. [Page 158]

She shows there were thousands of similar (and unknown) companies to the one which became phenomenal success. In parallel to Apple, there had been ProcTech (or Processor Technology), IMSAI, Cromemco, Xitan, Polymorphic. Vector Graphic, with an initial $6’000 investment in 1976 reached 4’000 units and $400’000 in sales in 12 months, and $25M fiver years later. By 1977, there were 50,000 personal computers in use. [Pages 144-6]

(A side comment about a book I did not know of: The Innovation Millionaires: How They Succeed by Gene Bylinsky (Charles Scribner’s Sons, New York, 1976.)

She also clearly illustrates the role of public intervention and support. One story I did not know about is how much John Doerr was involved in fighting proposition 211 in 1996. It shows that despite the general view that Silicon Valley has no interest in politics, on the contrary, many individuals and institutions are much more interested than generally thought. (See Proposition 211 ) [Section The Litigator – Pages 333-8]

Similarly, the complexity of things is illustrated with Peter Thiel, a famous Libertarian, a strong advocate of weak states and of President Trump: he is the (funding) founder of Palantir, a startup which most revenues at least early in its history, came from the government… [Pages 384-7]

But culture is never far. When Russian president Medvedev visited Silicon Valley in 2010 to try and understand the region’s secrets, he concluded that there simply wasn’t enough appetite for risk. “It’s a problem of culture as Steve Jobs told me today. We need to change the mentality.” [Page 388]

So Silicon Valley’s success does not stop… “By mid-2018, Facebook had made 67 acquisitions, Amazon had made 91, and Google had made 214.” [Page 391] Let us remember tough that in the GAFAM group, 2 companies are not based in Silicon Valley, showing how powerful the region is, just in terms of perception! Let me just add here an old post about startups M&As: Cisco A&D published in 2016.

It is also from an architectural standpoint as mention on Page 392. With the new Facebook building in 2015, or Amazon biospheres and Apple Park. 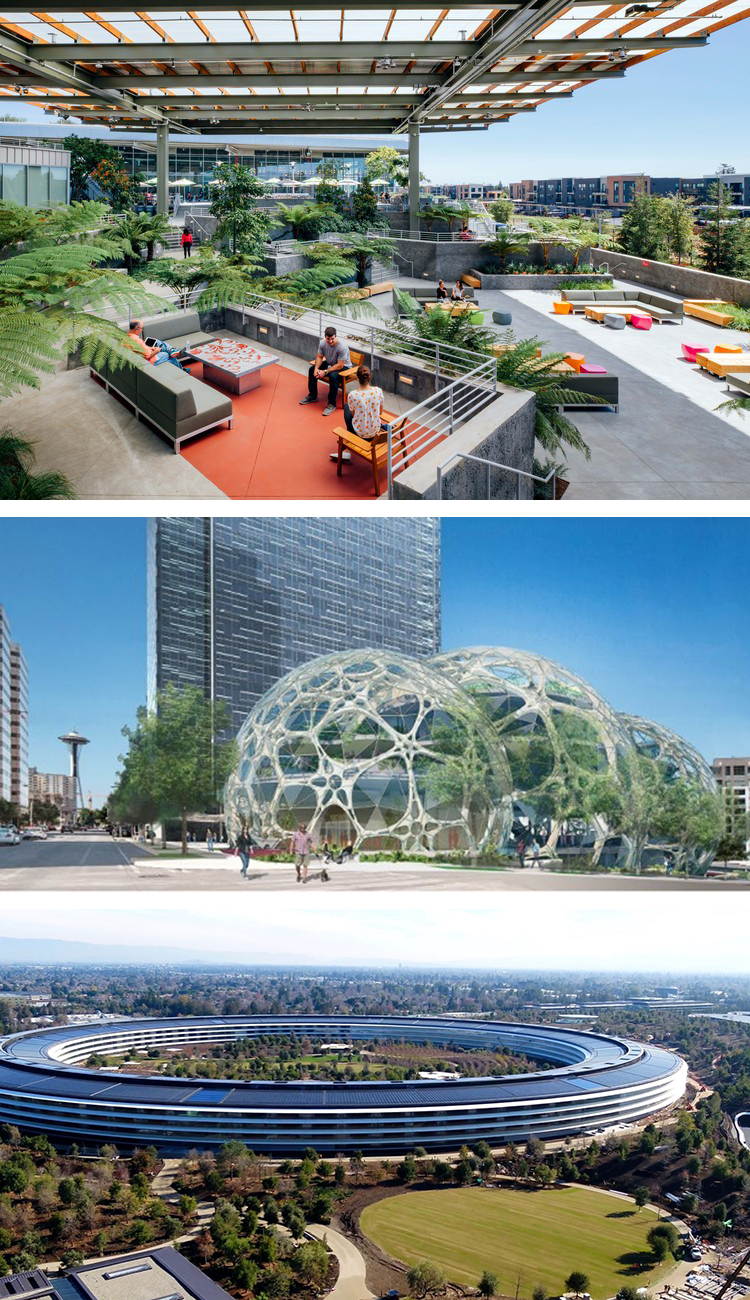 And there is a lot of money made. Google has a few years after its IPO more than 1’000 employees or former employees with a $5M wealth including an in-house massage therapist. [Page 392]

As a conclusion of my reading, a final quote:

“As wealth grew, so did the mythos around how Silicon Valley was able to generate one innovative company after another. It was about allowing risks and not penalizing failure, they’d say. It was about putting engineering first – finding the best technical talent, with no bias about origin or pedigree. It was about that “pattern recognition” so fatefully identified by John Doerr, looking for the next Stanford or Harvard dropout with a wild but brilliant idea.

Of all those assertions, Doerr’s slip-up came closest to the heart of the Valley’s secret. “West Coast investors aren’t bolder because they are irresponsible cowboys, or because the good weather makes them optimistic”, wrote Paul Graham, founder of the Valley’s most influential tech incubator, Y Combinator, in 2007. “They’re bolder because they know what they’re doing.” The Valley power players knew tech, knew the people, and knew the formula that worked.

They looked for “grade-A men” (who very occasionally were women) from the nation’s best engineering and computer science programs, or from the most promising young companies, and who had validation from someone else they already knew. They sought out those exhibiting the competitive fire of a Gates or a Zuckerberg, the focus and design ascetism of Kapor or Andreessen or Brin and Page. They funded those who were working on a slightly better version of something already being attempted – a better search engine, a better social network. They surrounded these lucky entrepreneurs with support and seasoned talent; they got their names in the media and their faces on the stage at each premier conferences. They picked winners, and because of the accumulated experience and connections in the Valley, those they picked often won.” [Pages 399-400]