Bad Blood by John Carreyrou is a thriller and an amazing document about Silicon-Valley based Theranos, a medtech startup that is probably the biggest scandal ever about a technology startup, and its cofounder Elizabeth Holmes. But it is not so much about Silicon Valley, as I will discuss below, but about where extremes of hubris, lack of ethics, can drive human nature. 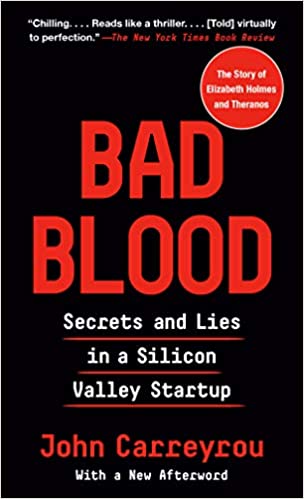 This is a thriller, a page-turner, but this is reality, unfortunately. In the end Carreyrou is not really puzzled about Holmes: Was she manipulated, did she lose control, but he has his answers (pages 372-73): Holmes knew exactly what she was doing and she was firmly in control. When one former employee interviewed for a job at Theranos in the summer of 2011, he asked Holmes about the role of the company’s board. She took offense at the question. “The board is just a placeholder,” he recalls her saying: “I make all the decisions here.” … A sociopath is often described as someone with little or no conscience. I’ll leave it to the psychologists to decide whether Holmes fits the clinical profile, but there’s no question that her moral compass was badly askew.

This is a thriller because Carreyrou introduces many individuals who suffered from the company’s total lack of ethis and secretive methods. Theranos did not hesitate to threaten these and used the most expensive lawyers who know how to intimidate. Homes knew how to seduce, to convince: She is also part of this terrible mentality that had been killing us for the last 20 years : if you are not (totally) with me, then you are my ennemy and I will crush you. A must-read!

Now Theranos was based in Silicon Valley but is not an illustration of what Silicon Valley is. People do not have to love Silicon VAlley, but using Theranos as a a reason why is a mistake: Silicon Valley, at least the one I know or I knew and appreciate is a place where trust and honesty are paramount values. This would take to long to explain but here is another quote of why Theranos is really an outlier (not the only one, but they are not so many:

Actually the most striking thing about Theranos's cap table was the lack of SV firms.

Ah yes, the cap. table. My favorite exercise! Difficult to do here because there is very little information. Here is what I was able to build. 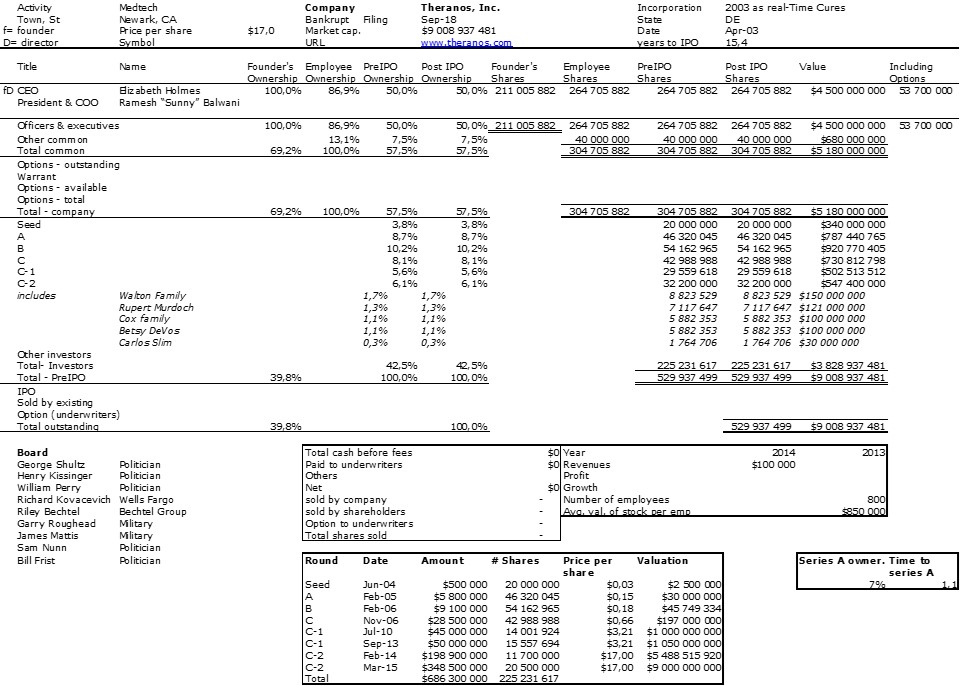