I continued reading the excellent From the Basement to the Dome by Jean-Jacques Degroof and found more inspiring elements about ecosystems, culture and also technology transfer from academic institutions after my first post. Here they are: 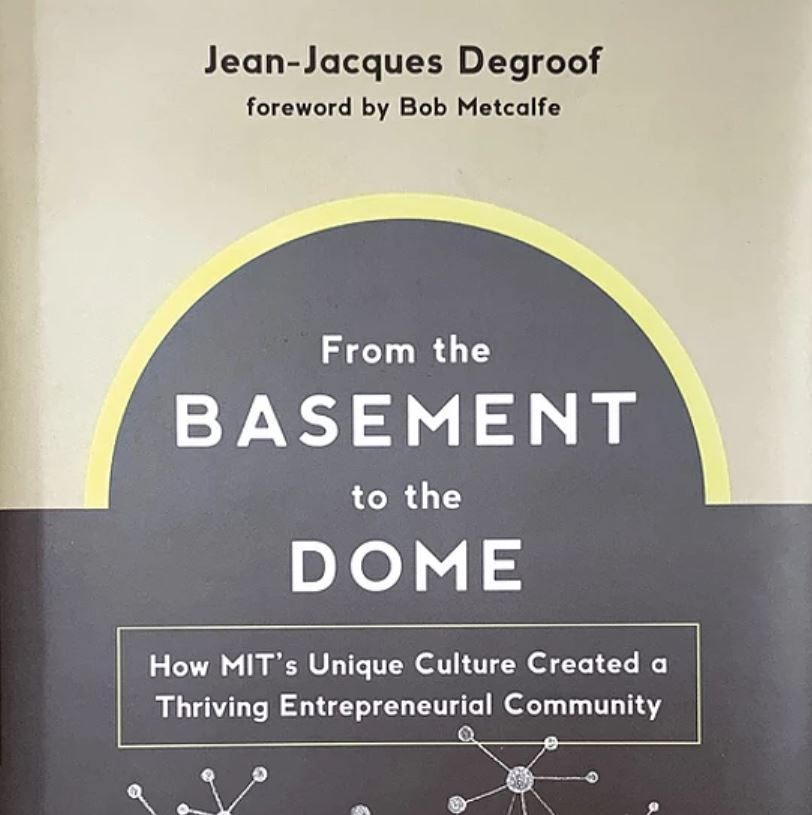 6 ingredients of the MIT ecosystem

Degroof gives us the cultural elements of the ecosystem: But what is it about this culture that has been supportive of entrepreneurship? The argument of this book is that entrepreneurship is particularly congruent with at least six elements of MIT’s culture: a well-ingrained, bottom-up organizational dynamic; excellence in all things that one studies or attempts to do, as well as a belief in hard work and fortitude; an interest in problem-solving and having a positive impact on the world; a belief in experimenting and a tolerance of failure; the pride of being viewed as rebels, sometimes eccentric and even a bit geeky, pursuing unconventional solutions; and the tradition of a multidisciplinary approach to problem-solving. [Page 90]

Here is an interesting comment about academic technology transfer: “Established firms are seldom interested in licensing emerging technologies from academia for several reasons. They don’t understand the potential of the technology; the time frame to develop the tech into a viable product exceeds the time horizon that most firms are comfortable with, or else they fear that they could cannibalize their existing business. As a result, in 1987, the TLO’s new director, John Preston, took the initiative to license technology to new ventures in exchange for equity, first as an experiment because there was a great concern at MIT about potential conflicts of interest. During the first year of this policy, six companies were formed based on such licenses, including ImmuLogic and American Superconductor. Sixteen more companies were formed during the second year. [Page 34]

Degroof then describes the multitude of ecosystem tools, all in a bottom-up logic, with serendipity (chapter 6) as a fairly common mechanism. The beginning of chapter 8 on technology transfer with the example of Amberwave is another must-read:

Often the initial performance of the new technology is either lower than that of existing solutions or not high enough to justify the switching cost for potential clients. As a result, established companies often don’t see the potential of new academic technologies. Moreover, in the few cases when the technology’s advantage is obvious or clearly promising, established companies are often concerned lest they cannibalize market share from their existing technology—a technology in which they have invested time and money, and around which they have built whole supply chains and other infrastructure.
It is estimated that an investment equal to 10 to 100 times the cost of the academic research is needed to bring an academic technology to market. This process also requires patience and perseverance. It can take at least two to three years for a patent to get issued once it is filed. When a company finally licenses a technology, it might take an additional five to ten years before it generates revenue. All in all, the uncertain performance of developing academic inventions, the associated costs, and the time lag between invention and revenue generation make investing in embryonic academic inventions extremely unattractive.
This does not mean that large firms never license patents from universities, but more often, inventors are the only ones to understand and to believe in the commercial potential of their technology. They are, therefore, frequently the only candidates interested in founding (and sometimes funding) a company to commercialize their technology. This process involves obtaining a license for the patent or patents based on their invention from their university, since, following the Bayh-Dole Act of 1980, the university owns the intellectual property of government-funded research. The edge that inventors have is the extensive and unique knowledge that they have accumulated through their research efforts and exposure to industry over the years. [Page 156]

And more interesting information here about avoiding conflicts of interests at MIT: Policies do not allow faculty members to use students for research and development (R&D) related to a start-up in which that professor has equity, nor may students be employed by such a start-up. A start-up in which a professor has an interest is not allowed to fund research in that professor’s lab. Similarly, a professor is not allowed to conduct federally funded research in collaboration with such a start-up, with the exception of SBIR and Small Business Technology Transfer (STTR) funding. A start-up venture may not be located in a lab. Employees of a professor’s start-up may not be involved in the research activities of the professor’s lab. Research in the lab may not be influenced by a professor’s other professional activities. A faculty member’s full-time employment at MIT prohibits significant managerial responsibilities in a start-up. [Pages 161-62]

Or about making money with Technology Transfer: Many universities expect their technology transfer activities to be profitable and bring in revenue. Although MIT is one of the most successful and experienced universities in terms of technology transfer, its experience shows that this kind of financial gain is a misleading expectation. “Any university that counts on its tech transfer to make a significant change in its finances is statistically going to be in trouble,” said Nelsen. To that end, her motto during her tenure as head of the TLO was, “Impact, not income.” [Page 162]

My experience with academic venture capital funds is mitigated to say the least. So this is an interesting experiment: Faced with this perceived market failure, MIT’s leadership pointed to the need for patient capital to bring ventures that are trying to commercialize tough science and need more time than do digital businesses to reach a stage where they are ready for venture capital. […] In October 2016, President Reif announced the creation of The Engine, https://www.engine.xyz , a for-profit but public benefit corporation, separate from MIT, that would act as an accelerator for start-ups trying to commercialize “tough techs” by providing advice and physical facilities, as well as an investment fund of patient capital. […] In addition to going against MIT’s policy of not funding entrepreneurial projects, The Engine also broke with Institute tradition by incubating the entrepreneurial projects of its members, which certainly raised substantial objections within the MIT community. [Page 64]

The Engine has a double bottom line: it seeks financial returns and it seeks impact. The Engine raised $200 million for its first fund, with MIT contributing $25 million. […] The fund invests from $250,000 to $2 million per venture, and its investments are not exclusive to MIT-related firms. The investment is made with a time horizon of eighteen years, rather than the typical five to eight years given in the case of venture capital funds. […] Second, The Engine gives start-ups access to infrastructure, such as expensive, specialized equipment, including some from MIT, that otherwise might represent a barrier to entry to firm foundations. The Engine’s facility was initially located in 26,000 square feet of space in Cambridge, with the ambition of expanding to 200,000 square feet through a network of offices, labs, and prototyping and makerspaces a few blocks from Kendall Square. […] Third, the new initiative comes with a network of professionals and mentors in the so-called hard-tech space. [Page 173]

In 2020, The Engine raised a second $250M with $35M from MIT and Harvard University joined as a new LP. Is this different than VC? Will it succeed? Time will tell…