You know I love this neat tool, whom I had played with on a certain April 1st. I just experienced what I had been waiting for some time: personal fonts. 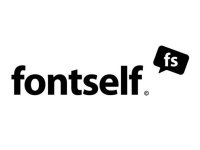