This is my latest contribution to Entreprise Romande. This is a topic I have covered from time to time and though that it would be interesting to share it with a wider audience thanks to the FER newsletter. 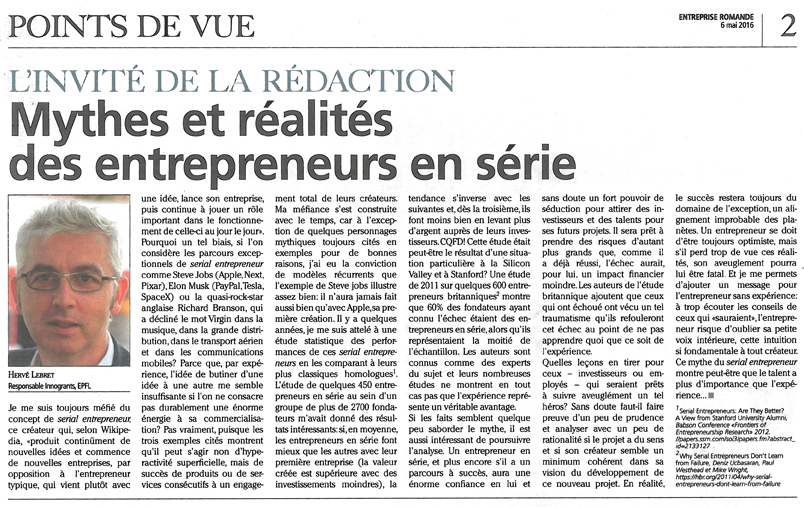 I have always been suspicious of the concept of serial entrepreneur, this creator who, according to Wikipedia, “continuously comes up with new ideas and starts new businesses, as opposed to a typical entrepreneur, who will often come up with an idea, start the company, and then see it through and play an important role in the day to day functioning of the new company.” Why such a bias if one considers exceptional serial entrepreneur like Steve Jobs (Apple, Next, Pixar), Elon Musk (PayPal, Tesla, SpaceX) or English “rock star” Richard Branson who declined Virgin in music, retail, air transportation and mobile communications? Because from experience, the idea of going from one idea to another seems far from sufficient if the entrepreneur does not invest an enormous and sustained activity to market and commercialize her project? Not really, since the three examples show that it can be not superficial hyper-activity, but the success of products or services consecutive to a total commitment of their creators.

My suspicion was built over time, because with the exception of some mythical characters always cited as examples for good reasons, I had the belief of recurring “patterns” and the example of Steve Jobs is a good illustration: he has never done as well as with Apple, his first creation. A few years ago, I dedicated some time to a statistical study about the “performance” of these serial entrepreneurs in comparison with their more conventional counterparts. [1] The study of some 450 serial entrepreneurs out of a group of more than 2700 founders gave some interesting results: if on average, serial entrepreneurs do better than others with their first business (the value created is larger, and with less investment), the trend is reversed with the following ventures, and beginning with the third, they do less well, while raising more money from their investors. QED! This study was perhaps the result of a particular situation in Silicon Valley and Stanford? A 2011 study of some 600 British entrepreneurs [2] shows that 60% of the founders having experienced failure were serial entrepreneurs while they accounted for half of the sample. The authors are known as experts on the subject and their many studies do not show that experience is a real advantage.

If the facts seem somewhat scuttle the myth, it is also interesting to analyze a little further. A serial entrepreneur, and more if she had a successful career, will have an enormous self-confidence and probably a seduction power to attract investors and talent for her future projects. She will be ready to take risks, even greater as she has already succeeded, so that failure may have a lower financial impact. The authors of the British study add that those who have failed have experienced such trauma that they repress this failure to the point not to learn anything from the experience …

What lessons for those – investors and employees – who are willing to blindly follow such a hero? Probably the need to show a little caution and analyze with some rationality if the project makes sense and if the creator seems a minimum rational in his vision of the development of this new project. In reality, success will always remain the domain of the exception, an unlikely alignment of the planets. An entrepreneur must always be optimistic, but if he loses too much sight of these realities, blindness can be fatal. And I would add a message to the entrepreneur without experience: by listening too much to the advice of those who “know”, the entrepreneur may forget his inner voice, the intuition so fundamental for all creative people. This myth of the serial entrepreneur perhaps shows that talent is more important than experience …