Here is my third contribution to Créateurs, the Geneva newsletter, where I have been asked to write short articles about famous success stories. After Adobe and Genentech, here are some thoughts about women and high-tech entrepreneurship. 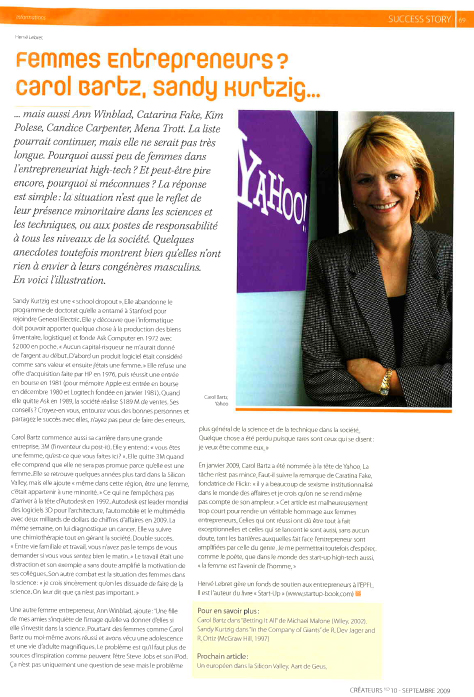 … but also Ann Winblad, Catarina Fake, Kim Polese, Candice Carpenter, Mena Trott.
The list may go on but would not be much longer. Why so few women in high-tech entrepreneurship? And even worse, why are they so little known? The answer is simple: the situation is just an illustration of their position in science, in high-level positions in companies or in society more generally. A few anecdotes will show however that they have nothing to prove their male counterparts.

Sandy Kurtzig is a school dropout. She stopped the PhD program she was following at Stanford University and joined General Electric. She discovered there that computer science must help in improving manufacturing (such as in inventory management or logistics) and left again to found Ask Computer in 1972 with $2’000 from her own savings. “No venture capitalist would have given me money in the beginning. First software was seen of no value and then I was a woman.” She declined an acquisition offer from Hewlett-Packard in 1976 and in 1981 Ask Computer went public on Nasdaq. (The reader should remember that Apple had gone public in December 1980 and Logitech was founded in January 1981.) When she left Ask in 1989, the company had $189M in sales. Her advice to entrepreneurs? Believe in yourself, hire the right people and share success. Do not be afraid of making mistakes.

Carol Bartz also began her career in a big company: 3M is the inventor of the famous post-it. She heard there: “you are a woman, what are you doing here?” She left the company when he understood she would not be promoted because she was a woman. A few years later, she moved to Silicon Valley. “Even in this region, being a woman is belonging to a minority.” Her comment will not prevent her from becoming CEO of Autodesk in 1992. (Autodesk is the world leader for 3D software for architecture and mechanical design with $2B in sales in 2008.) That same year, in 1992, she was diagnosed with cancer. She will have chemotherapy while managing her company. She succeeded twice. “With private life and work, you do not have time to wonder if you are all right or not.” Work was a distraction and the leadership she showed was a strong motivation for her colleagues.

She is also fighting for the position of women in science: “I sincerely believe that women are dissuaded [from doing science]. They are told it is not important. Another female entrepreneur, Ann Winblad adds: “The daughter of a friend of mine is worried about appearing too nerdy if she invests in science. However some of the successful women – myself, Carol Bartz – all of us were math whizzes and we really had fun teenage lives as well as adult lives and have been very successful. The problem is that we need role models like Steve Jobs with this inspirational product, the iPod. Something is getting lost in the message because not many say I want to be like them.”

In January 2009, Carol Bartz became Yahoo’s CEO. The task may not be easy. Should we listen to Caratina Fake, founder of Flickr: « There is a lot of institutionalized sexism working against women in business and I think that people aren’t even aware that it’s there. » This post is unfortunately too short to celebrate women as entrepreneurs- Those who succeeded had to be exceptional and those who try also, without any doubt. The barriers entrepreneurs face are amplified for women. I will just conclude by copying the poet in saying that, in the start-up world maybe “Women are the Future of Men”.

Next article: A European in Silicon Valley, Aart de Geus.

4 thoughts on “Women and High-Tech Entrepreneurship.”