I’ve been using this analogy a lot in my talks or courses. Fred Wilson has been using it to in his latest post, The Expanding Birthrate Of Web Startups.

In my talks, the slide is the following (you can check slide 61 in the pdf I posted in Start-Up, the book: a visual summary): 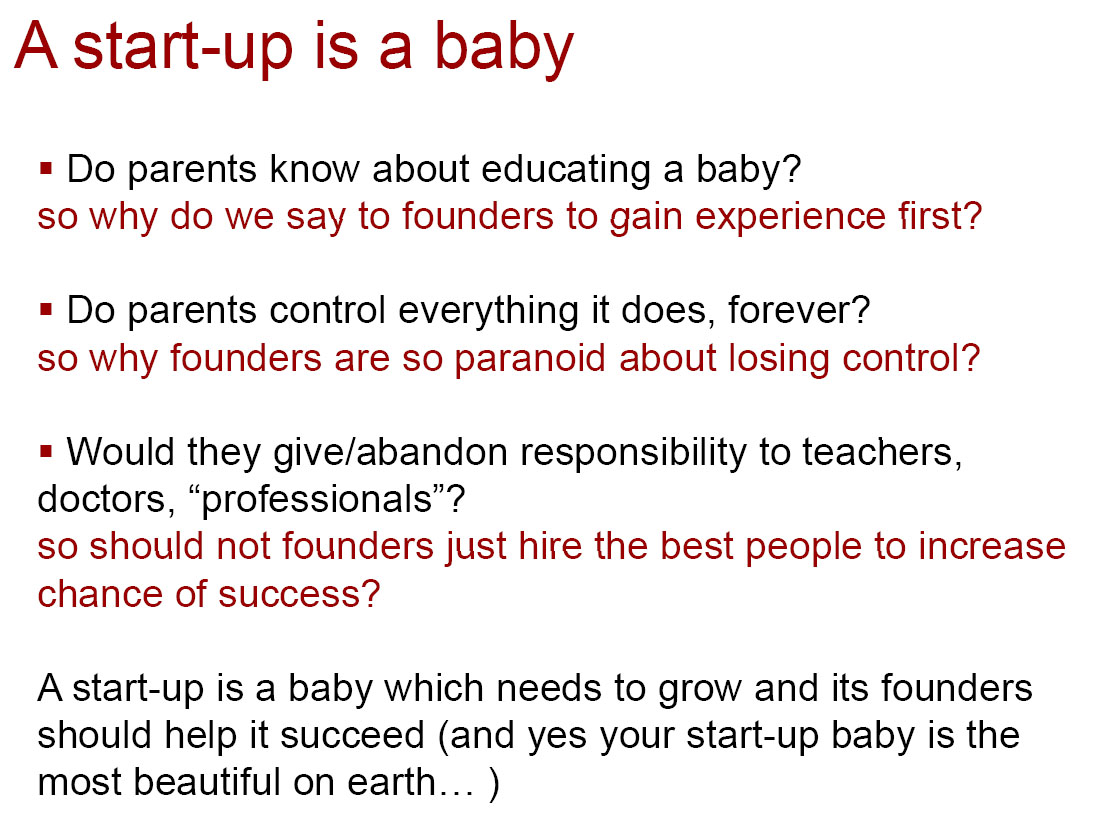 In full text, it is again
– Do parents know about educating a baby? so why do we say to founders to gain experience first?
– Do parents control everything it does, forever? so why founders are so paranoid about losing control?
– Would they give/abandon responsibility to teachers, doctors, “professionals”? so should not founders just hire the best people to increase chance of success?
A start-up is a baby which needs to grow and its founders should help it succeed (and yes your start-up baby is the most beautiful on earth… )

Finally, I usually add, maybe because I am a bit traditional, that I strongly believe single-parent families/companies are tougher for the kid so find a partner, never found a start-up alone.

What’s interesting with Wilson, is that he helps me enrich the analogy with parenting, so he sees the investor, not the founder as a parent. For me, the investor is a mentor, a godfather… so here are a few comments related to the analogy in his post:

– “I am committing to the care and feeding of the company until cash flow breakeven (the startup equivalent of adulthood)” (Wilson himself)
– “I worry like a parent with too many kids. Who is going to take care of all of these kids?” (Wilson again)
– “Parenting is a good way to put it. Unsure about the “pulling the plug” comparison though, doesn’t go very well with parenting!” (Loic Lemeur)
– “The super-angels and the angels, don’t try to play “parent”. They play friend. It’s a mutual benefit relationship, but the ultimate control is to the entrepreneur. Usually the friends and family who are excited about your seed round (when you leave their company), are not thinking about follow-on.” (Prasanna Sankaranarayanan)
-“do you think the “orphaned startups” will suffer because their “parent investors” remove themselves” (Adam Wexler)
-“an environment not unlike pre- or emerging-industrial third world nations. High infant mortality, the necessity of conserving scarce resources for those infants with provable indications that they CAN survive the initial impediments. It doesn’t mean that the parents love or value the survivors more, but rather that as a practical matter there are few options. […] if a ‘gifted child’ is to be sustained through the vagaries of infancy, then it’s important for both the company and the investor(s) to consider this up front. […] When, at the outset, it becomes clear that substantial investment in capital equipment, research and development, or extended operation at a loss is required if a ‘gifted child’ is to be sustained through the vagaries of infancy, then it’s important for both the company and the investor(s) to consider this up front. ” (Rich Miller)
– “We make fun of parents today who enroll their kids in the right kindegarden so they can get into Princeton, Yale, Harvard, but perhaps they aren’t so wrong if we applied that logic to startups….what do you need to do as an early stage company to ‘get into the right school’ when you come of age?” (Dave Hendricks)
– “But that’s not good parenting… if you want your child/portfolio company to succeed long term, you’ve got to consider where the road will take you, because the easy road/early exit isn’t a lock and is usually a lot harder than you think” (Reece Pacheco)
– “History: birthrate without control produces malnourished kids.” (Agilandam)
– “Short answer: A lower % of these “kids” will make it to their 3rd birthday.” (Andy Swan)
– “I thought you were going to make a separate point, that there aren’t enough acquirers — Google is active, Microsoft, Yahoo and others much less so — to adopt all the kids who don’t go public.” (Glen Kelman)
– “If programs like Y Combinator are getting our smartest kids to start companies instead of going to law school, McKinsey etc then that’s going to lead to good things for our industry and our economy.” (Chris Dixon)
– “Also… you say that entrepreneurs should find a one or 2 VCs and have a long term relationship with them. Isn’t this true for VCs too? Doesn’t it make sense to have the same investors lead the company from birth to adulthood and not one VC for the “toddler” period, one of the “child”, one of for the teen? If we take that analogy a little bit further, we know that foster kids who are taken from foster family to foster family usually don’t end up as “well” as the ones who get the same frame all along?” (Julien)

So the analogy has some value. You can react…