Is Google losing traction to Facebook? When I begin to read such things as Google Offers Employee $3.5 Million Not to Join Facebook or Google-Facebook : la guerre des talents est déclarée (the war for talents is declared) in the serious French newspaper Le Monde, it is probably time to wonder.

The funny thing is that when I had lunch last week with a Swiss entrepreneur who needed contacts in Silicon Valley, I discovered that one my eBay contact was now at Facebook, one of my Microsoft contact was now at LinkedIn, so at the micro or macro level, there is something going on.

You know Google is one of my favorite topics. I regularly look at their growth for example. So here is it again. Too early to say if they are in the slowing part of the S-curve… 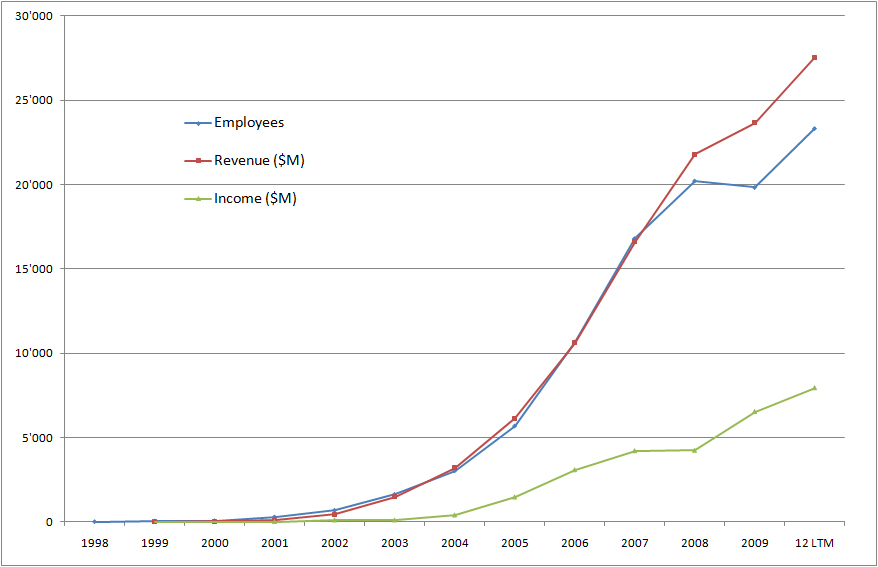 Facebook numbers? it’s rumors mostly so the graph below should be treated cautiously! 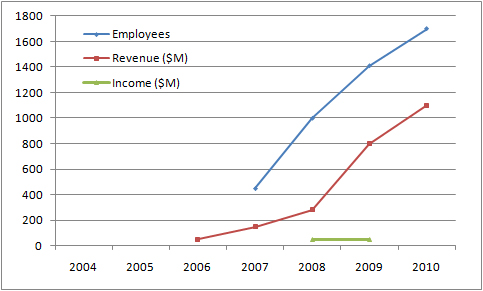 The funny thing is that I had noticed there was a relation at Google between employees and revenues, basically $1M per employee. Facebook looks slightly less efficient.

Silicon Valley has always been a war for talents. In the 90s, the electronics industry lost people to the Internet companies (you should remember that Yang and Filo, the founders of Yahoo! were studying in the field of electronic design automation) then Google was doing the same in the early 2000s, now it is about social networking. I would not worry too much for Google though. Not yet! As as Richard Newton was saying in EDA Cafe : “Silicon Valley and the Bay Area are cradles of innovation.” And he further added, stating a colleague of his: “The Bay Area is the Corporation. […When people change jobs here in the Bay Area], they’re actually just moving among the various divisions of the Bay Area Corporation.”