A few publications I read recently push me to revisit a topic which is quite well-known and (I discover it is not that) simple. I would like to discuss again the basic definition of innovation and then mention why the term “open” before innovation has been quite misleading for many readers.

Innovation is not invention, it is its complement. Some say it is the commercialization of invention, others the scaling of invention (which was for me a new and interesting concept). The difficulty lies in the fact that there is a continuum and a lengthy process from the idea (invention) to its application (innovation) and all the actors playing a role in between are impacted by the constraints of innovation.

So let me directly jump to open innovation, a concept I have been uncomfortable since the first time I heard about it. Open Innovation was developed by Henry Chesbrough (http://en.wikipedia.org/wiki/Henry_Chesbrough) and his book is probably among the best selling books with innovation as the main topic. 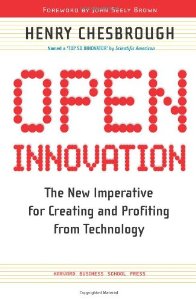 His main idea is that corporations are developing products in a distributed manner and not anymore in a vertically integrated manner where the corporation masters all aspects of its development from the initial ideas to the final selling. Innovation is nowadays “open” because corporations in-license and out-license intellectual property from and to partners, collaborate with universities, work, outsource with partners. Of course the term is a little misleading because it does not mean innovation is available to external partners, it means that corporations have extended their borders to the outside in order to innovate better.

Julien Penin, a researcher from Strasbourg, argues in his paper “More open than open innovation? Rethinking the concept of openness in innovation studies” that this is not a good definition of open innovation. He adds a number of new constraints which would make innovation really open. In his conclusion, he states: “We identified three constitutive elements of a context of open innovation: (i) Voluntary knowledge disclosure; (ii) Openness of knowledge and; (iii) ongoing interactions among stakeholders.”

He is not saying open should be free, but he is fighting for (neutral) access to knowledge. Where I am a little puzzled though I like what he says is that I am not sure he is talking about innovation or invention. But he has a clear point on the definition of openness. He further adds in his introduction that “Open innovation à la Chesbrough is therefore synonymous with distributed innovation […], disintegrated innovation, modular innovation […], network innovation, or collaborative innovation.” and a littler later “We propose therefore to rethink the concept of openness in innovation studies [… where] an open world is opposed to a world of control or permission.”

You may react and think that these are only definitions but I think it goes much further. Let me expand a little bit. In a recent Xconomy post, Wade Roush wrote about Xerox PARC and Apple, and their relations to describe how innovation works: PARC Fires Back at New Yorker, Claiming Old Apple Legend Misses Point of How Innovation Works Today. It is well-known that Xerox has been good at inventing but weak at implementing its inventions into innovations. Well. Silicon Valley as an innovative cluster has always been an open ecosystem, because the borders are very fuzzy. Just check again the Wagon Wheel Bar story or the arguments by AnnaLee Saxenian that Silicon Valley has been more successful that Route 128 in Boston because the culture is more opened (https://www.startup-book.com/2011/02/25/google-silicon-valley-and-the-spin-off-virtuous-cycle/) .

One interesting comment on the Xerox/Apple link is a comment taken from Malcolm Gladwell’s May 16 New Yorker article, “Creation Myth: Xerox PARC, Apple, and the Truth about Innovation”: “It takes a combination of Soviet-style systematic analysis, U.S.-style high technology, and Israeli-style improvisation under constraints to run a successful war or create a successful product.” PARC, he argues, had only the technological abundance, not the analysis or the constraints, added Wade Roush. Interesting!!

And he further adds “Open innovation is the idea, worked out by Berkeley business professor Henry Chesbrough and others, that companies should have permeable boundaries when it comes to intellectual property—licensing in technology from outside when it’s key to building new business lines, and licensing it out from inside when it’s not being properly exploited.” Well it is not clear at all that open innovation creates “permeable boundaries” and it is clear at all that open innovation is good for all partners.

Whereas Silicon Valley has been something different, something more open that Chesborough ‘s definition. The eight traitors, the Apple story, Google or Facebook today show that SV is an open environement which Richard Newton described as (see https://www.startup-book.com/2010/11/12/google-vs-facebook/) “Silicon Valley and the Bay Area are cradles of innovation.” And he further added, stating a colleague of his: “The Bay Area is the Corporation. […When people change jobs here in the Bay Area], they’re actually just moving among the various divisions of the Bay Area Corporation.” This may be closer to the open source movement, but this is of course too simplistic when people who know Silicon Valley could experience how competitive and aggressive it can be.