A friend of mine just gave me a bunch of old Upside and Red Herring magazines. For those who are too young, these were the references in high-tech and entrepreneurship in the late 90’s and early 00’s! I plan to go through them and when something will attract me, I might mention it here. So here is the first example:

In May 2000, search engines were still nice internet tools that did not make that much money. Google was a hot start-up with two brilliant Stanford PhD students, and no real CEO. SO here is what Upside was saying:

Searching for profits. By John F. Ince, Upside Magazine, May 2000.

The pioneers had to expand to make money. Will the next wave fare any better?

During meetings, they bounce on huge rubber exercise balls. “It helps us to think better,» explains one employee. Between meetings, they blow off steam in the air hockey room, rollerblade; and ride bikes at the bay-front park, or go downstairs for a massage. At lunch and dinner, they dine on gourmet meals prepared by Charles le Chef, previously employed by members of the Grateful Dead and diverse upscale restaurants. Classical music from a baby grand piano will soon waft through the lobby. Welcome to Googleplex, home of a hot, new search engine that two Stanford Ph.D. candidates are riding like a cresting wave on an ocean off avorable publicity into a Never Never Land, where money is as plentiful as 3D-foot waves at Maverick’s, and nobody seems too concerned about wipeouts or ever having to turn a profit.

In November 1999, Fortune wrote, “Google seems to exhibit inscrutable magic.” But the biggest mystery is that the company seems to give such short shrift to the more mundane aspects of developing corporate strategy, penetrating new markets, and creating revenue. Nor does anyone in Googleplex have a clear timetable for when Google will turn search technology into profit. “Our number one priority,” says co-founder Larry Page, “is improving our technology and the user experience. We are insanely focused on that.” 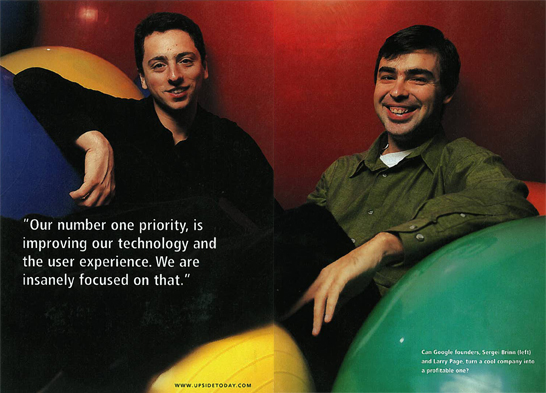 In terms of pure technology, Google is getting the best reviews. According to a competitive survey conducted by NPD Online Research, Google came out at the top of the list in overall user satisfaction and loyalty. The survey included the top 13 search and portal sites and was commissioned by 13 major Internet companies, including America Online, Ask Jeeves, HotBot, LookSmart, Lycos, Excite, Go Network, GoTo.com, Netscape, WebCrawler, and Yahoo. What makes Google’s technology so cool? “It is a sophisticated next-generation search engine that uses complex mathematical algorithms to determine the importance and relevancy of Web pages,” says CEO Larry Page. Whereas most search engines use a keyword or metasearch technology, Google emphasizes making sure that the most important result comes up first. To do this, Google takes advantage of the expertise of millions of the “highly qualified editors,” out there who are creating, formatting and linking their Web sites. Google is hypertext-based and takes a gestalt view of information, analyzing all the content on each Web page. It considers such factors as fonts, subdivisions, and the positioning of all the terms on the page. It also factors in what’s happening in the site’s neighborhood. It looks at links and comes up with results that more often than not are superior to other searches in the critical category of relevancy. Google also provides searchers with an excerpt from the Web page with search terms highlighted in boldface type.

“I was very impressed, especially with their commitment to technological excellence,” says John Doerr of Kleiner, Perkins, Caulfield, and Byers. Kleiner eventually invested and : Doerr took a position on Google’s board, as did Sequoia Capital’s Moritz.”People thought we were crazy, both investing and both going on the board of yet another search engine,” says Doerr. “But their search numbers kept going through the roof, and still do.” In a little over two years since the release of its beta site, Google’s capability has gone from 50,000 searches a day to more than 10 million. Half of those searches emanate from Google’s Web site, google.com, and half from co-branded Web sites that contract with Google to provide search.

“Google is a shining example of superior technology actually drawing traffic on the Internet rather than marketing,” says Danny Sullivan of Search Engine Watch. Can Page and Sergei Brinn, Google’s other 20-something founder, translate their technology into a profitable business even though they have no business experience? Will they eventually hand over the reins to a seasoned veteran, as Yahoo’s founders did with Tim Koogle? “We have had discussions,” says Brinn, “and when the right candidate appears we will hire that person.” Moritz isn’t sure the process will be so smooth. “When will we know when we have found the right candidate?” he asks. “We won’t. Jerry [Yang] and David [Filo] weren’t sure that Tim Koogle was the right guy at Yahoo. They asked, ‘How do we know that TK is the one for the job?’ We didn’t. You only find that out after.” Will Moritz and Doerr force the issue? “We are investors, not managers,” says Moritz. “We can argue our position, proffer advice, make suggestions, twist arms gently, but we can’t force them to do anything. This is their company.” 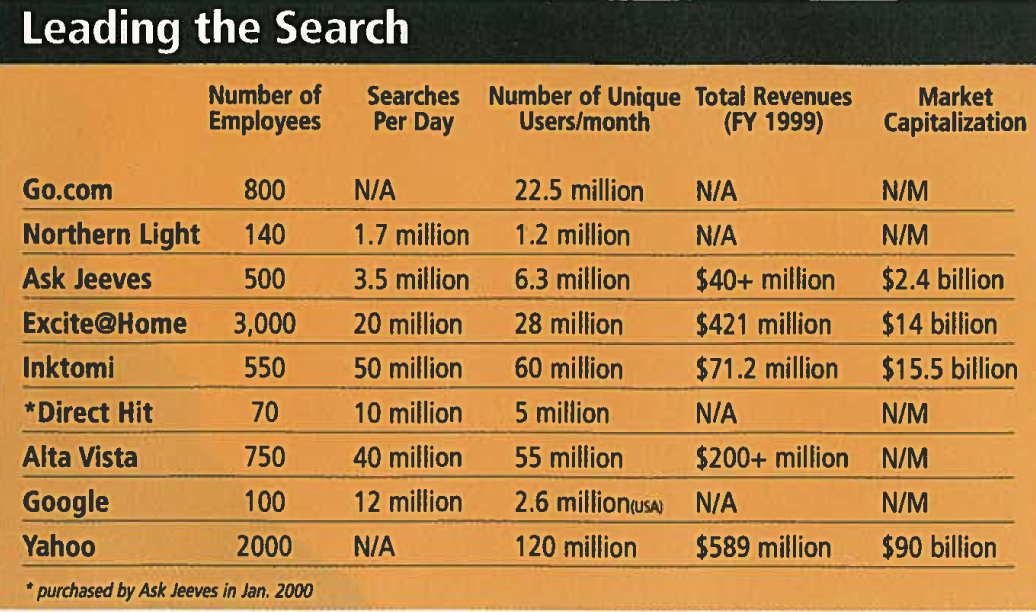 Is Google positioning itself for acquisition, like Direct Hit, or does it intend to go it alone? “We are constantly talking with the other portals and search engines about possible partnerships,” says Brinn cryptically. “It is a very small community,” he adds. According to IDC’s Parr, “If you’ve got the money to [remain independent], it’s a reasonable strategy,” He continues, “Build word of mouth, build a team, get product ready.” Google’s strategy is to make money via co-branded WebSearch, SiteSearch, and advertising. WebSearch offers commercial Web sites such as Netscape’s Netcentral portal and The Washington Post search capability for the Internet at large. Google has licensed its SiteSearch technology to other Web sites, such as Linux vendor, Redhat.com, enabling users to search for information contained only on RedHat’s site. But these contracts only provide compensation in the vicinity of S5 to $10 per thousand searches- not much of a revenue source. Google expects its new banner advertising program, highly targeted to specific users, to account for 60 percent of its revenues within two years. “When your customers are doing search, you know a lot about them,” says Page. “That knowledge base can be monetized in higher advertising rates.”

There are many lessons, but for me the most striking is that VCs do not seem to dictate what the founders will do. Of course, Google was and is an excpetion in many dimensions, but it shows that entrepreneurs are the real center of Silicon Valley. The second striking point is the fact that technology was Google’s main asset. There was a bet that their technology leadership would convert at some point into a profitable business.

3 thoughts on “When Google wasn’t (yet) Google…”