I do not why 2011 saw three IPOs with companies beginning with Z. I thought that beginning with an A was what mattered (Apple, Amazon, not to say @Home). Maybe this is the Zuckerberg effect!

So I looked at the cap. tables of these three companies. Zipcar went public earlier this year, Zillow today and Zynga filed earlier this month. Zuckerberg might wait until 2011 though. They do not have that much in common, except they are all Internet companies with nice revenues (but not always a profit) and a lot of venture capital too. Zynga being apparently the current star, I begin with it. Of coure the price per share is a guess, as the company is not public yet, it just recently filed at the SEC. 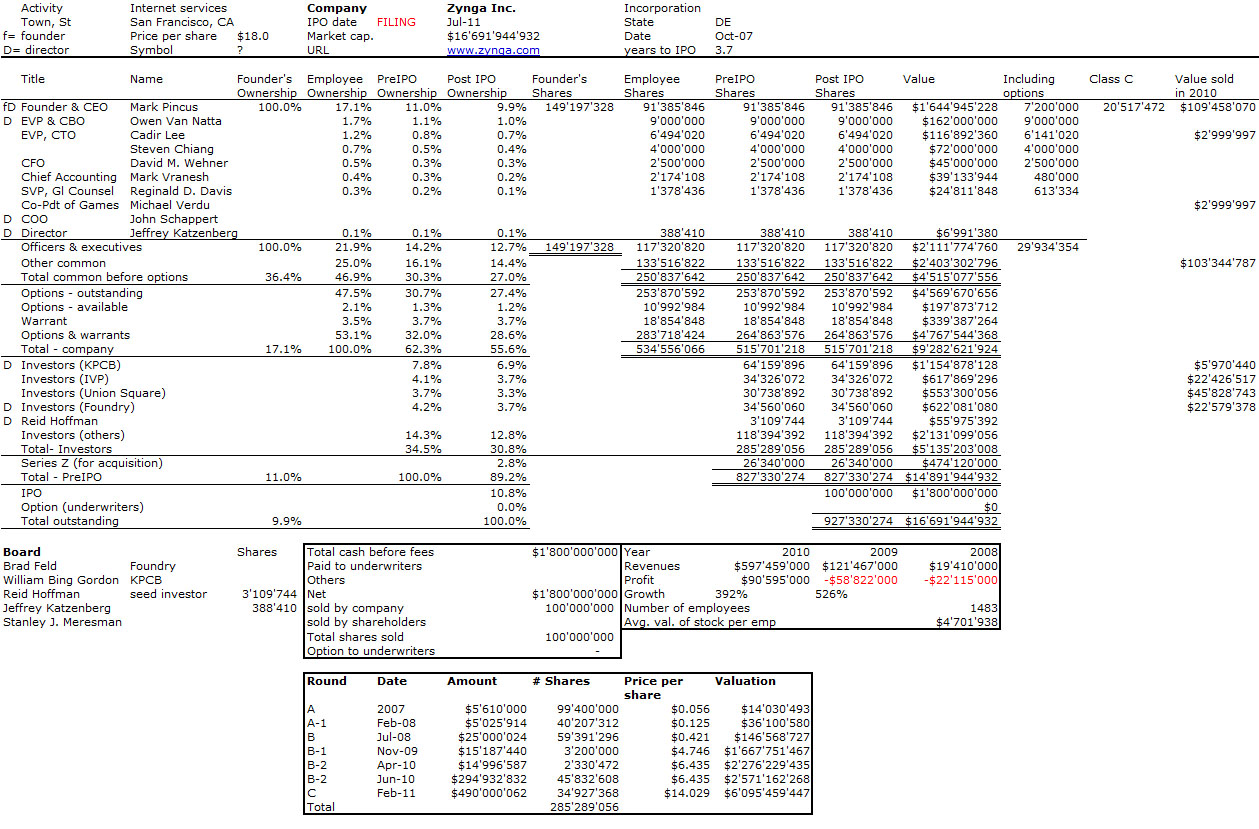 As the fund raising included sales of existing shares, the following data is also of interest. But I still have to admit there are missing pieces in all this and it might still be a little confusing (in comparison to previous tables, sorry!) Zynga has only one founder, Mark Pincus (check his Wikipedia profile). As with Zillow (and Google in the past), founders have shares of a special class which usually guarantee more voting right. 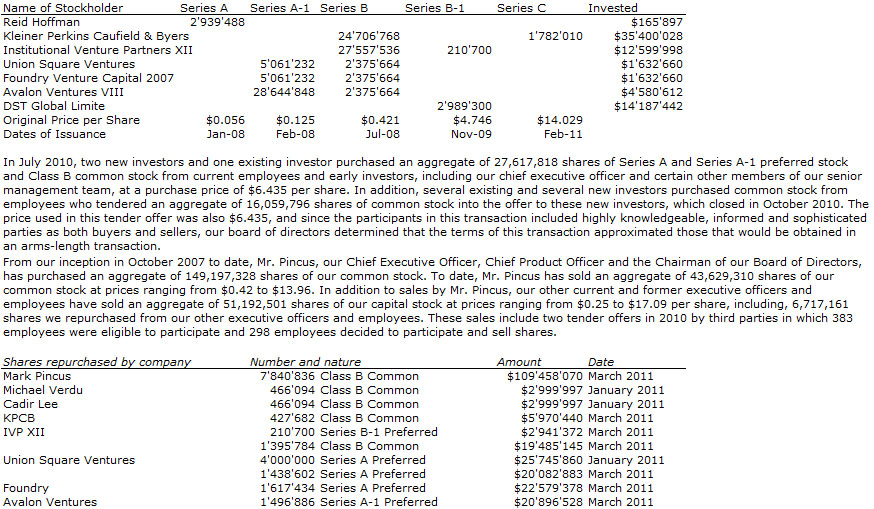 Zynga has raised $850M, had about $600M in revenues and a profit of $90M in 2010. Nice! KP and IVP are the two famous VCs and Union Square is the new emerging player (Twitter, FourSquare, Etsy). As a sidenote, Fred Wilson is a partner and has a great blog, avc.com. Reid Hoffman was the seed investor (co-founder of LinkedIn, former VP at Paypal, investor in more than 80 start-ups).

Next is Zillow. Again the 2 founders (with about an equal amount of shares) have also special voting shares. The company is a little older but has raised less cash ($80M), has smaller revenues and not a profit yet. Another element of interest is the equity that independant directors own (you also have this in the Zynga and Zipcar tables). Zillow changed its price again up from $18 uin my table to $20. 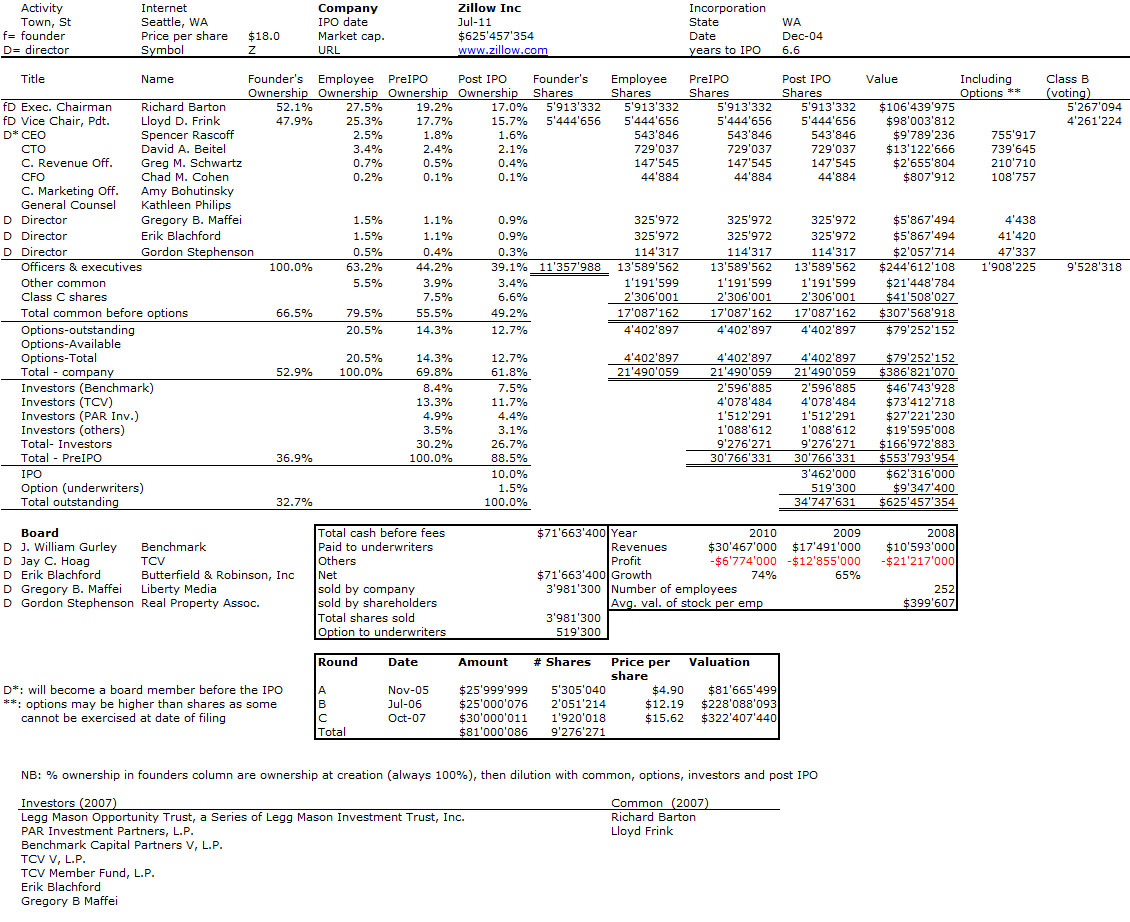 And finally Zipcar. Again two founders, but not much info on them as they are not active anymore. A lot of money raised, good revenues but no profit. Much older (11 years old). Benchmark again is a VC (just as in Zillow). 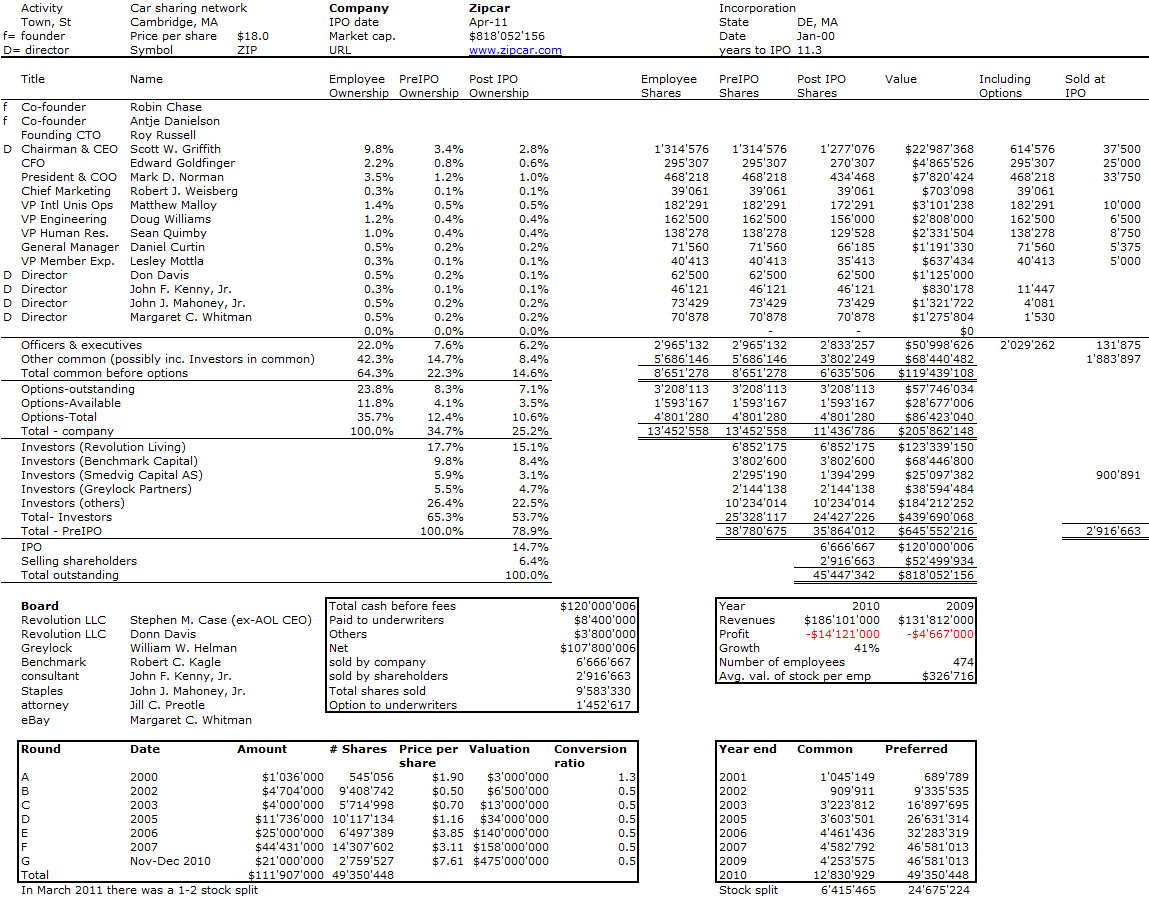 A word of conclusion: Zynga will be the big winner if it goes public at the mentioned valuation until Zuckerberg goes out (you can still have a look at my “tentative” Facebook equity table).

1 thought on “The Z IPOs: Zynga, Zillow, Zipcar and … Zuckerberg”