My first post for 2012 is a translation of an interview I gave to French magazine La Recherche. It was published last December and you can have an electronic version of the French version here or a pdf document by clicking on the cover page below. It is followed by my own translation. Now I should say that I was a little surprised by the title which I had not expected. I was more thinking in something like “start-ups are the forgotten children of innovation!” The title focused on my cautiousness about IP and patents in particular. It is certainly too strong, but that is what titles are made for… 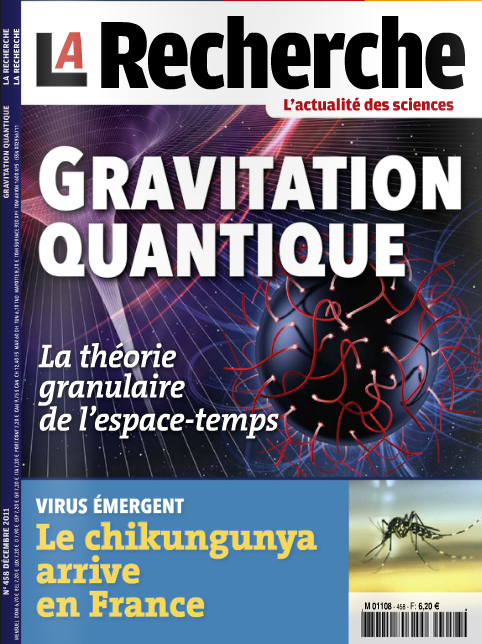 Innovation is a matter of culture. An admirer of Silicon Valley, which he has known for twenty years, Hervé Lebret calls for Europe to be inspired by the dynamism and creativity of its start-ups. But is it good to take everything in this model?

The entrepreneur should be at the center of innovation policy

Isn’t the $200 billion market capitalization of Google exaggerated when compared to the actual value of the company?
H.L. The world of venture capital has unfortunately become a financial asset like any other. It is no longer a world of former entrepreneurs who pursue their business while investing in those of others. There is too much money, too much speculation in the U.S. venture capital. But I remember that the start-ups appeared before the Nasdaq, the stock market where shares of high technology companies are traded. Silicon Valley began in the 1960s and 1970s in the context of the counter-culture in California. Steve Jobs did not hesitate to say that some of his creativity came from drugs when he was young. The growing role of finance in the economy only started in the 1980s. Originally, the financiers were the patrons of great artists. That said, I think the current trend of large groups limiting their spending in research and development is catastrophic. Shareholders want 15% return and push to cut spending on research. Good start-up can only emerge if there is also good private research.
Do we see a slowing of the technological innovation?
H.L. I am indeed concerned about the lack of success in current innovation: the 1970s were marked by the transistor, the 1980s by the personal computer; the 1990s by the networks. But in the 2000s, I see nothing new. The Web 2.0 is not a technological revolution, it is a consolidation. More generally, biotechnology was rather disappointing; there is no revolution in energy, chemistry. It is not clear that nanotechnologies are really promising technological breakthroughs. I fear that the 2000s did not create start-ups which are equivalent to Intel in the 1960s, Apple, Microsoft or Genentech in the 1970s, Cisco in the 1980s, or Google in the 1990s. There is Facebook, but this company does not rely on high technology innovation. That said, there has always been a general pessimism about the future of innovation, so I hope to be wrong!
You mention companies in information technology or biotechnology. Is this model of start-up transferable to capital-intensive areas, and where there are already major players, such as aerospace, automotive, chemicals?
H.L. The established players are not necessarily the most innovative. Clayton Christensen from Harvard Business School, showed in 1997 that an established company is great at improving existing products [3]. It is innovation by evolution, not revolution. Renault can invent the electric car, but not a new mode of transportation. Besides, the idea of the minivan, which was then copied, did not come from internal R&D at Renault, but from the company Matra, who did not have the same experience in automotive, which made it more creative. It is also for this reason that the big companies, especially pharmaceuticals, outsource their innovation: they prefer to leave the start-up take the risks, and then buy them. Even an old startup such as Cisco replaces the term “research and development” by “acquisition and development”.
Why do you insist so much on start-ups? An academic institution can also license its patents to the industry, or form mixed private / public laboratories…
H.L. The basic problem is towards whom an innovation policy is directed. My belief is that the entrepreneur must be central. This is not what is done in France: the clusters are clusters of established companies, not tools to promote creativity and entrepreneurship. I insist on start-ups because I think they are the forgotten piece of innovation policies. Of course there is innovation in large groups. But I wonder if they can do disruptive innovative. They can set a goal – the flat screen, the smart phone, or, today, the electric car – that will come out in twenty years. But can they do something entirely new, as did Google? Or Genentech, which revolutionized the manufacture of drugs using genetic engineering techniques? I believe that only start-ups are able to do so. Christensen said if you want to make a major innovation, create a branch and place it as far as possible of your research center as the worst enemy of innovation in a company is conservatism. Innovation is the highest in small teams: this is what happens in the start-up.

Hervé Lebret. A graduate of Ecole Polytechnique and Stanford University, with a Ph.D. in electronics, he worked, after a few years as a researcher, as a venture capitalist, in Geneva from 1997 to 2004. Since then he has been teaching management of technology and manages a seed fund at the Ecole Polytechnique Federale de Lausanne.

> Hervé Lebret, Start-up. What we may still learn from Silicon Valley Create Space, 2007. www.startup-book.com
> www.oecd.org/sti/scoreboard An oecd study on patents
> http://vpiv.epfl.ch/innogrants The site of the Innogrants at EPFL.