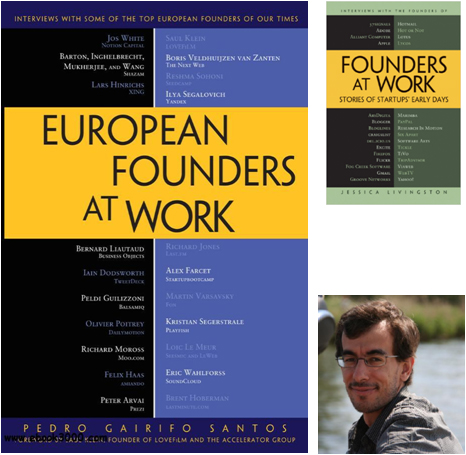 One comment though, I noticed 8 UK projects out of a little more than 20 and these 20 are mostly Software or Internet. More diversity may have been great. This being said, the lessons are great! Here are some… (and you will learn much more by reading the book entirely!)

About the US Market (for Europeans)

“I think that Europe has a lot of credibility in certain sectors, particularly media and the creative industry, but I think that in technology, generally, most of the world’s biggest companies were founded in the US and, therefore, the expectation in the US market is that in technology, they are going to be talking and buying from US companies. […] it’s important to become a US team in the US market. […] I think you need to be prepared to make a pretty big investment in the US and you need to be prepared to build up the business for several years,” Jos White – MessageLabs

“I would say that the IT sector, and especially enterprise software, is extremely global but remains dominated by US companies. There are very, very few examples of European IT and software companies that have managed to go global. I believe, the only way to make that happen is to go global very, very quickly, as we did from the outset.” Bernard Liautaud – Business Objects

“In my experience, if you come from a smaller European market, like Hungary or Sweden, you tend to think that it’s a nice next step to go to UK or Germany. The issue is that if you become successful there, it is still only a sixth of that of the US market. So, if you get a US competitor, you immediately become a regional player instead of a global player. So, very early on, I said we shouldn’t even be thinking about opening up offices in Frankfurt or in London because the way to make it globally was to first prove that we can make it on the world’s biggest market, which is the US. That’s going to be the truth at least for the next ten to fifteen years.” Peter Arvai – Prezi 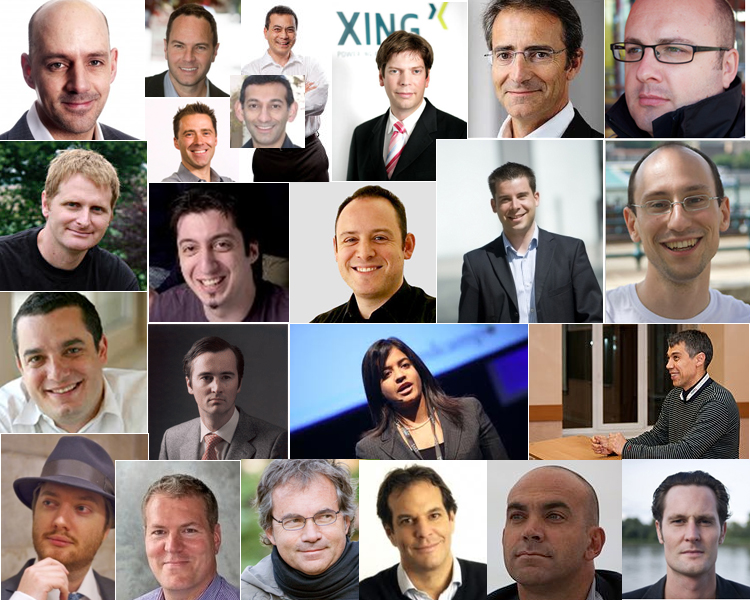 About success and failure

“Any successful entrepreneur knows that it was a combination of skill and attitude, with luck, that really leads to success. And there are very fine lines between success and failure” Jos White – MessageLabs

“I learned that the game is never over: you should never give up, stubbornness is somehow a requirement to lead a company to success, and the road to success is inevitably paved with failures. When things start to go wrong, the worst thing to do is panic and change everything.” Olivier Poitrey – DailyMotion

“I think as an entrepreneur you fail all the time. You’ve got failure built into your business. Right? So you don’t really keep track of failure. You never really fail. I think that’s essential when you’re an entrepreneur, that you’re not afraid of failure. You embrace failure. Your whole business is based on trying out stuff, being ready for stuff to fail and just taking the next step as soon as you fail.” Boris Veldhuijzen van Zanten – The Next Web

“Come up with an idea which is impossible then try to find somebody who can make it un-impossible and then do deals which have never been done before.” from the Shazam founders

“I guess one advice is it’s more exciting if you feel like you’re changing the world in a positive and innovative way. So we’d love to see more of those out of Europe.” Brent Hoberman – lastminute.com

“But it is probably harder in Europe in that it innovates less, because you have less-crazy investors financing crazy entrepreneurs. [Advice:] One, international. Two, innovation and no copycat. And then, three, big ambition.” Loic Le Meur – Le Web

“There are very few founders that stay with their businesses beyond five years and quite often, in my opinion, it’s because they didn’t manage to surround themselves with the right team.” Bernard Liautaud – Business Objects

“I also learned how hiring the right people from the start is key: the very first people to join will shape the company’s personality. And finding talented people you are pleased to work with is very important to generate emulation from new hires. Olivier Poitrey – DailyMotion

“Another common mistake is like a cliché now, but it’s just the classic: “I’ll just build another feature and I’ll focus on my product.” Alex Farcet – Startupbootcamp

“The main advice is just start. Many people have hundreds of ideas, but they never really start their own project. And if you fail, start again. Entrepreneurship is, in my point of view, the best and the only way to personal development” Lars Hinrichs – Xing

“There are a lot of moments like that where you don’t know what you’re doing, but this was the whole point.” Giacomo Peldi Guilizzoni – Balsamiq

“ “Do it.” It’s the best decision I’ve ever done in my whole life. […] And I was studying engineering as well, and I had one hundred classmates. And I know that almost zero of them actually went on to start a company, which is kind of crazy because I know a lot of them have good ideas. But none of them quite felt that they were able to pull it off.” Eric Wahlforss – Soundcloud

“I have been lucky enough to be born with optimism.” Richard Moss – moo.com

“Hang in there. Don’t give up. I heard that most start-ups fail because the founders stop working on them.” Richard Jones – last.fm

“I would be realistic and I would say, “Look, if you think you are the lucky sperm that’s going to get the ovule, go ahead and start the business.” It’s a very difficult thing to do with a very high probability of failure. But it is essential for society and even those who try and fail are also helping society. So I encourage people to try, but at the same time warning them how difficult it is. I am tenacious and I am sometimes lucky and I’m good at spotting trends. But I was also lucky. Most people who try businesses fail. That’s the truth and people should be warned about that.” Martin Varsavsky – FON

As a conclusion let me quote Saul Klein in his foreword… “Right now, Silicon Valley is peerless at both supporting innovation and creating serious scale. There’s been no master plan, but the 60-year interplay of government as an early catalyst; academia and established companies as early customers and sources of talent; and of course, investors willing to take risks and a long term view, have given entrepreneurs fertile ground to sow seeds and try to grow monsters with dragon’s teeth ready to conquer the world.You need every element of this ecosystem working perfectly to create monsters. This is serious progress. But the straight facts are that while we are unquestionably masters of invention in Europe, we don’t yet have the ecosystem— or perhaps the attitude. […] For me, the big question is if we are truly able to do this.”

Post Scriptum: I am not finished yet. I love to add cap. tables and not so many of these entrepreneurs are running a publicly quoted company. Strangely enough, one is Russian, Yandex. Its foudner and CTO says something great about sales: “I think one of them is when you create a software product, you have to learn how to sell it, you have to learn how to make it a product. It’s a very basic skill. I think every engineer has to try that at least once, to sell the software he created, regardless of how bad it is. No matter how unpolished your product is, you have to try to explain why it is good for someone else.” 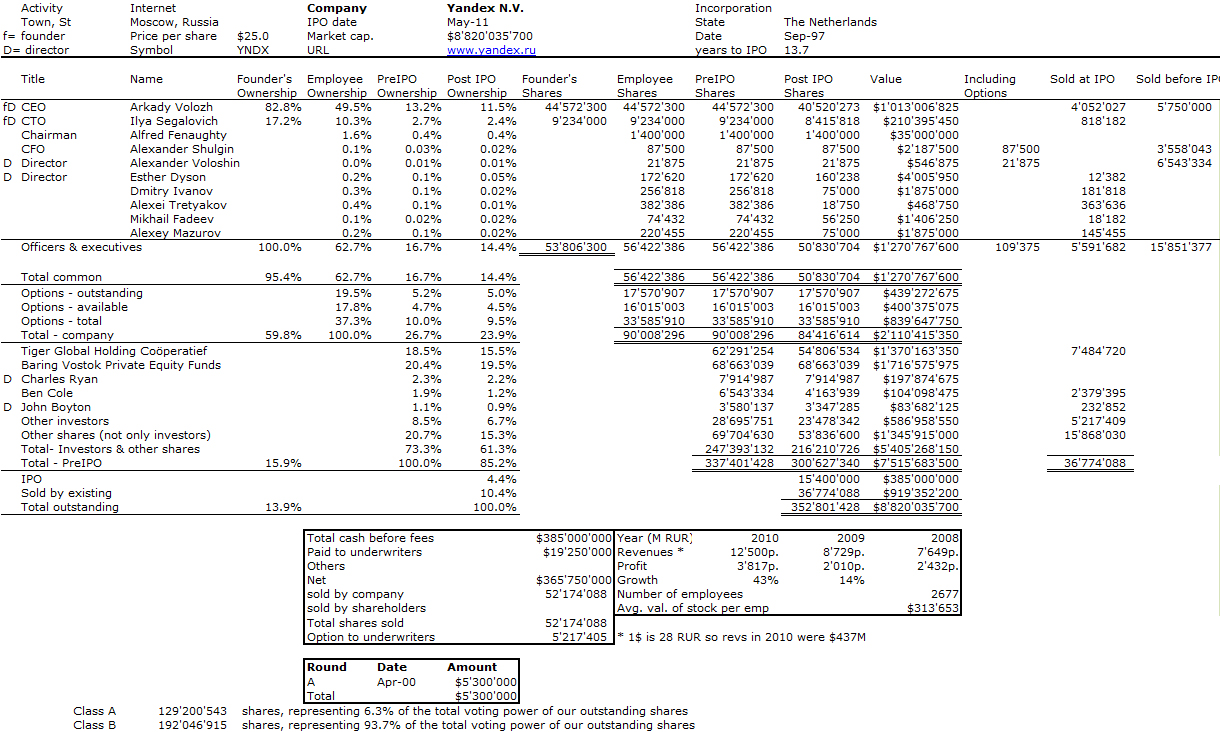 1 thought on “European Founders at Work”