I was lucky to be invited as a panelist at the Global Semiconductor Conference in Geneva on May 8-9. The round-table topic was “how to create more successful start-ups”. But before mentioning that discussion, I’d like to mention the previous panel, which gathered Stan Boland, former CEO and co-founder of Icera Inc, Dennis Segers, CEO of Tabula and Remy de Tonnac, Chief Executive Officer, INSIDE Secure. Stan has sold Icera to nVidia for $367M after raising $250M (a nice but small 1.3x return). Dennis has raised about $200M for Tabula and apologized for preventing start-ups to get that money, whereas Remy just took INSIDE Secure public on the Paris stock exchange, raising €70M after the company raised more than €100M in venture money since its inception.

I was very impressed by INSIDE Secure long history (it was founded in 1994), including unfortunately washout rounds. What was great is de Tonnac’s message stating that start-ups can only survive if they keep their entrepreneurial spirit and innovation DNA. Here is my usual cap. table format for the company. [The history, the list of investors and number of financial rounds are so long that the numbers might be approximation only…] 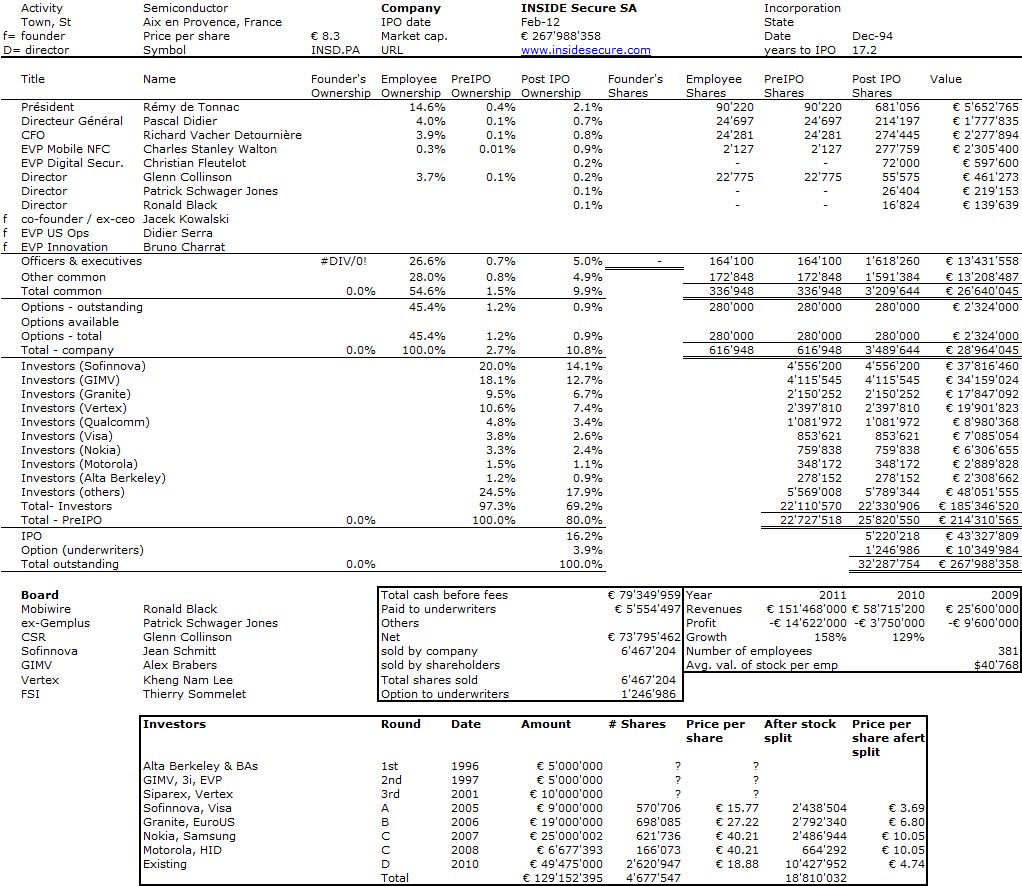 This shows once again that it is possible to try and succeed in Europe, but it seems to take much more time than in the USA. Now back to my panel. The motivation for the topic is the smaller and smaller number of funded semicon start-ups as the next figure shows.

And apparently, the main reason for this “crisis” comes from the huge amount of money these start-ups needs to reach profitability.

Well, if it was just about the amount of financing needed, biotech would be dead too, and my recent post Biotech IPOs, not so different shows it is not true. There might be at least two other reasons which explain the difference:
– you cannot go public without any revenue as it is the case with biotech, and I am not sure why (is it because the life cycle of semicon products is much shorter?) and
– the financial ratios of semicon companies are not great (Intel, the market leader is worth 2.5x its sales and 10x its profits).
But I am not fully convinced by the argument.

In fact I had another argument which might be simply said a lack of creativity combined with a culture of collaboration which has been lost. Indeed, the day before, another panelist said “why the heck would I share it, if I had the killer app”. Well, one might not share a killer app, but in Silicon Valley, there has been a lot of sharing:

Even today, people at LinkedIn and Facebook help each other even if they compete. I am less sure this happens at Google or Apple though! And here is what the NPR Radio “Morning Edition” had to say about the Silicon Valley ingredients. I strongly believe and agree with de Tonnac that we need more Entrepreneurial Spirit and Innovation DNA. 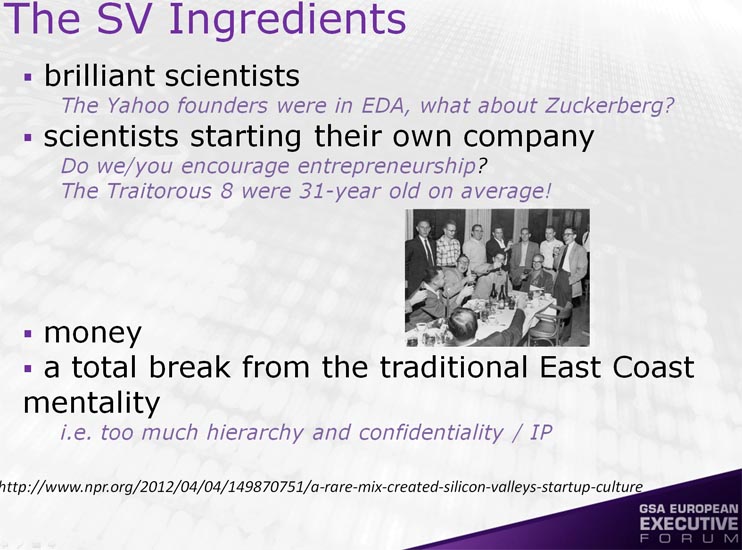 1 thought on “Semiconductor start-ups. Is it the end?”