I did not check how many times I blogged about Finland, but it is certainly one of the most interesting and entrepreneurial countries in Europe. However, when I attended the REE conference at Aalto University last week, I have been shocked by the talk of Risto Siilasmaa. He is not only the chairman of the struggling mobile giant, but also the founder and chairman of F-secure, a successful software start-up. If you have time, watch his talk and listen carefully. Here are may notes, hopefully correct: “Entrepreneurship should be cherished, because it will be critical of the future of the world. It is not a profession, it is a state of mind.”

(Go to youtube at http://youtu.be/nFyKRCo4QkM if you do not see the embedded frame!)

“In 1924, Finland got 37 medals and 14 gold medals in the Olympics, much less in 2012. Finland was poor but at that time Europe was 25% of the world population and 33% of the GDP. In 2050, it will be 7% of population and 15% of GDP. And we will not be able to give to everyone all the wealth Europeans enjoy today. Not even talking about climate change and aging. Today, out of 100 people, 46 work in Europe including 8 in health care. In 2050, 38 will work and 18 in health care. Less than 20 will create wealth for the others. The equation does not work. European subsidies are 1/3 to coal mining and agriculture and 6% to R&D and technology. This is also meaningless. Europeans citizens need to elect leaders who have vision and courage… Entrepreneurship is making an impact and there is no point in doing small innovations when you are going to fail.”

Risto founded f-secure when he was 24 years old, but began making pocket money when he was 12. He studied at Aalto but found more negative elements than positive ones. Entrepreneurship was not valued, teachers did not value their teaching or if they taught well. “It was very disappointing”. He did not have classmates with an interest in entrepreneurship BUT he has to thank Aalto for pushing him to create a company with a friend when he began doing business. It was a consulting/project firm and he hired many Aalto alumni. He also remembers “the aversion to transfer practical skills” and an attraction for theory [something we should think about – why is that?]. “Management science was disappointing, the more complicated you were, the better (do you know what are “diseconomies of time compression?” [see next line]). CEOs never read management research, researchers want they fellow researchers only to read them, or why would not they use “lead-time” instead of the complex concept before? Whereas there might be hidden gems in research but how can CEOs know.” “Again entrepreneurship is a state of mind, which implies pragmatism, ambition, dreams, perseverance, optimism and give-up-&-start-again. It is also about a desire for results. We need to wake up, try, kill what fails and start again.” Siilasmaa quoted George Bernard Shaw: “Some men see things as they are and ask why. Others dream things that never were and ask why not.”

Then there were Q&As about:
– The Taboo of Money. Yes, the new French president said he hates rich people. Money is a by-product, but success should be celebrated. Once you have enough, you do not need money, but it is an outcome.
– Stock options. Q: Is it accepted in Finland like in SV? A: yes but down rounds and lack of exits make stock-options less successful not less accepted.
– Values: they should come from parents not from school. Now it is true some leaders succeed with strange values, such as “cult leader”. Not easy to blame them when they are successful but then how do we align this with values… not easy.
– Research on entrepreneurship again: if a paper is not complex, it is not accepted, too bad! CEOs read 300-page books with 1 idea, unfortunately. So you need to select teachers with the right values & ambition. Why not entrepreneurs? There is a book about picking the right people. Google it…

The REE conference was rich in quality speakers but nothing close to Siilasmaa. I noticed some good things such as “being an entrepreneurs is making an impact. Just like scientists or artists, it is about do you want to be remembered. Therefore we should “expose as many people as possible to entrepreneurship and hope that diversity will induce wealth. Again it is about a Darwinian process. And we should also be aware that entrepreneurship is not just about satisfying needs, but also answering to frustrations and desires.

I was less convinced about the fact that creativity can be taught (but I am not creative so maybe I should follow such courses!), about the idea that customers may be better to fund your start-up than investors (it is not my experience but I might be biased) or even that teaching can replace the state of mind. But there was a funny analysis that I restate my way: “If 100 students follow a course, 10 may launch a company, 5 will fail because they did not listen / learn, 4 will survive because they learnt the tools to avoid fatal mistakes, and 1 will succeed because he did not fully listen and did it his way on top of surviving.”

Let me finish with something loosely related. As you may know if you a regular visitor here, I love to put cap. tables of start-ups when available (at time of an exit), and here is F-secure. 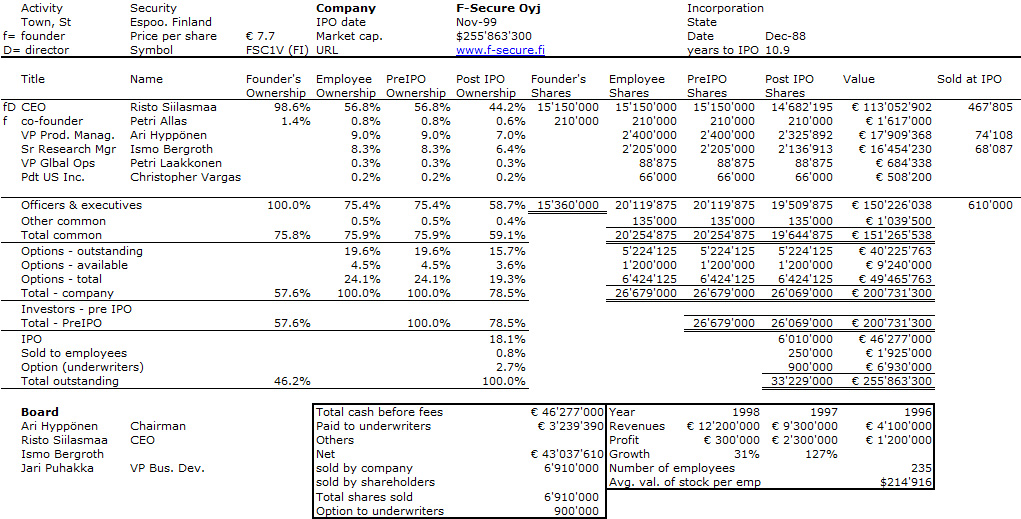