I have not read (yet) Isaacson’ authorized biography of Steve Jobs but found (by pure accident) another recent, funny an really great book, The Apple Revolution. Interesting too and somewhat related to a previous blog I published on Robert Noyce and the culture of Silicon Valley. As important is the subtitle: Steve Jobs, the Counterculture and How the Crazy Ones Took Over the World. 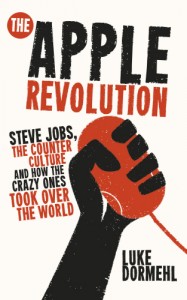 Dormehl, the author, is convincing when he explains that Silicon Valley is the result of the counter-culture as much as the Midwest engineers coming to SV. Noyce might have agreed! “This ideological divide is not uncommon. Silicon Valley has long been defined by the innate tension between the technologist’s urge to share information and the industrialist’s incentive to profit. […] There were aspects of the counterculture that were staunchly anti-capitalists in their views. […] One of them was definitely Marxist and the other was largely apolitical.[..] “Do you own thing” easily translated into “Start your own business”. [Pages 61-63] “Only in Silicon Valley could starting a business be read as an act of rebellion.” [Page 169]

There are so many (unknown-to-me) anecdotes that I will only mention a few. For example, I did not know about Ron English, the guerrilla street artist who circumvented Apple’s billboards using murderer Charles Manson. 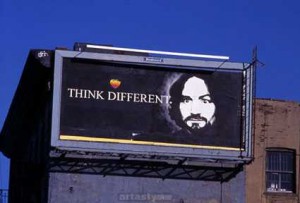 “The people who built Silicon Valley were engineers.” Jobs told wired in 1996. “They learned business, they learned a lot of different things, but they had a real belief that humans – if they worked hard with other creative, smart people,- could solve most of the humankind’s problems. I believe that very much.” [Pages 7-8]

At the same time, the counter-culture, the hacker culture has been critical [page 17]:
– Access to computers – and anything which might teach you something about the way the world works – should be unlimited and total;
– All information should be free;
– Mistrust authority – promote decentralization;
– Hackers should be judged by their hacking, not bogus criteria such as degrees, age, race, or position;
– You can create art and beauty on a computer;
– Computers can change your life for the better.

A funny anecdote is a woman going to the Homebrew Computer Club because nearly all the attendees were male. Her verdict: “the odds were good, but the goods were odd”. (Page 25)

You will learn about the history of the Apple logo [pages 85-90] and the first killer apps (word processing and spreadsheets). I did not know Paul Lutus and John Draper. And what about Apple first ad campaigns!

(Go to youtube at http://www.youtube.com/embed/J0Rs7d16jhU if you do not see the embedded frame!)

(Go to youtube at http://www.youtube.com/embed/HhsWzJo2sN4 if you do not see the embedded frame!)

You will obviously read about the mouse, about interactions with Xeroc PARC and also learn about the early days of the MacIntosh concept and its father, Jef Raskin who yanked sharply in the arm of a young developer when he saw his face and guessed his thinking, labeling as “wet-behind-the-ears marketing puke, dressed in a ridiculous chalk-pinstripe, complete with banker’s vest, shoes off, stinky feet up […] an abrasive punk in need of a slap” a Steve Jobs he had not recognized! [Page 189]

“The Macintosh project represented the first time – outside the Garage in which the Apple II had been built – that Apple would put together the kind of small, dedicated team that would produce some of the company’s greatest products in later years. Jobs referred to this company-within-a-company approach as returning to the “metaphorical garage”. The Macintosh team still had all the piss and vinegar of a start-up. “Innovation has nothing to do with how many R&D dollars you have” Jobs said. “When Apple came up with the Mac, IBM was spending at least one hundred times more on R&D. It’s not about money. It’s about the people you have, how you’re led, and how much you get it.” [Page 202]

You will also read about the legal issued Apple faced in the music field and the funny origin of the Sosumi. It’s not only about Apple, you will read about Next early team, Dan’l Lewin, Rich Page, George Crow, Bud Tribble Susan Barnes an Susan Care as well as Pixar’s founding team, Alvy Ray Smith, Edwin Earl Catmull and John Lasseter ; “Pundits even came up with a tongue-in-cheek name for the unlikely convergence of Silicon Valley technology and Hollywood moviemaking. They called it Sillywood.“ [Page 303] So you can comment my tentative cap. table of NeXT (see below) when acquired by Apple. 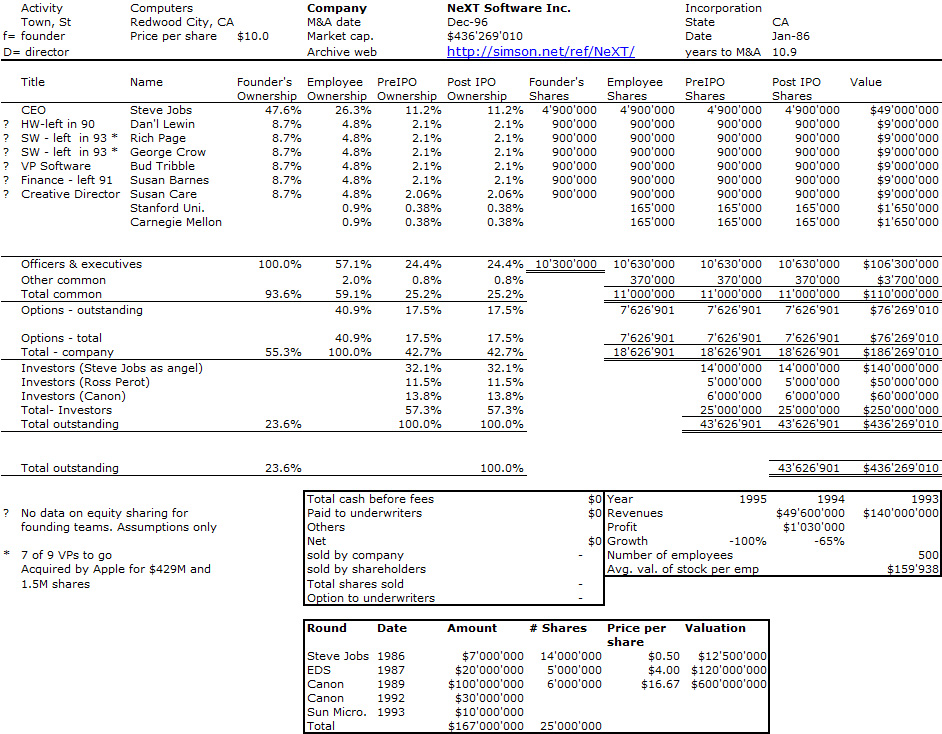 Another piece of video is Pixar first work, The adventures of Andre and Wally B. If Jobs did OK with Next, what about with Pixar. He got 70% for $10M then Smith and Catmull each had 4%. But jobs got 100% after putting $50M. [Pages 335-336] There is also the funny anecdote that the iMac could have been called the MacMan, sounding “like a cross between the video game Pac-Man and Sony’s handheld music player, the Walkman.” [Page 413]. There is also an analysis of intellectual property [Pages 430-431] “Whether or not a breakdown i traditional copyright laws odes, in fact, lead to a similar decline in creativity and innovation remains a hotly contested debate” adding that “Gates, typically referred as imaginative”, and having “never invented anything” is wrong. “Gates had invented the notion that Software (be it entire operating systems or simple files) could be sold. Jobs merely reframed the idea as a necessary protective measure for creativity.” Apparently Dormehl advises to read Lawrence Lessig’s  The Future of Ideas.

(Go to youtube at http://www.youtube.com/embed/W1rpE2c1Vco if you do not see the embedded frame!)

In the final chapters, Dormehl addresses the Apple paradox of the counterculture becoming mainstream. He quotes Norman Mailer [Page  384] “One is Hip or one is Square” and he adds [Page 408] that “no one better summarized the new ruling creative class of boomer bobos (that’s bourgeois bohemians) than Steve Jobs. […] They are prosperous without seeming greedy; they pleased their elders without seeming conformist; they have risen towards the top without too obviously looking down on those below; thy have achieved success without committing certain socially sanctioned affronts to the ideal of social equality; they have constructed a prosperous lifestyle while avoiding the old clichés of conspicuous consumption.”  Then [Page  456] Paul Lutus describes the App Store as a “classic marketer’s dream, with too many programmers with too many programs chasing too few buyer dollars, and the marketer in the middle the only really cashing in.” (Perfect capitalism, long if ever lost counterculture…) “Apple turning its back on its founding libertarian ideals.” […] “With the suggestion made that high-tech libertarianism apparently leans heavily towards the puritanical.” Still Jobs did not forget some elements of the start-up culture. “Jobs wanted the department to have only one hundred people, since that was the number of names he could remember.” “Apple was able to avoid unnecessary levels of bureaucracy. We’re the biggest start-up ion the planet Jobs proudly noted in 2010.” [Pages  462-463.] About innovation, “Gladwell’s suggestion (via economists Ralf Meisenzahl and Joel Mokyr) is that it is history’s tweakers – more so even than its inventors – who truly define the age:  The visionary starts with a clean sheet of paper, and re-imagines the world. The tweaker inherits things as they are, and has to push and pull them toward some more nearly perfect solution. that is not a lesser task. [Page  474] And as a near final quote from Norman Mailer again “One is a rebel or one conforms, one is a frontiersman in the Wild West  of American night life, or else a Square cell, trapped in the totalitarian tissues of American society, doomed willy-nilly to conform if one is to succeed.”  “It is for this reason that musicians like Jim Morrison and Jimi Hendrix who passed away at the age of twenty-seven, will forever be seen as young, idealistic rebels.” “The sheer scale of the current Apple makes it difficult to consider it any kind of rebel.”  [Page  502]  “Despite being declared moribund 59 times since 1995” [Page  495] , Apple is a formidable capitalist story as the next graph shows. 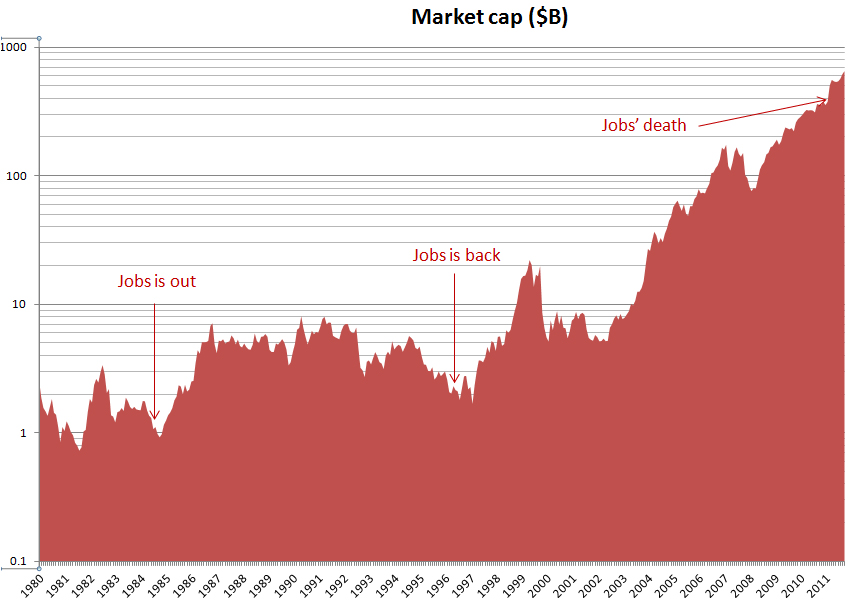 As a conclusion, let me quote Jobs again, and I discovered this on the Wikipedia page for Think Different:
“When you grow up you tend to get told the world is the way it is and your life is just to live your life inside the world. Try not to bash into the walls too much. Try to have a nice family life, have fun, save a little money.
That’s a very limited life. Life can be much broader once you discover one simple fact, and that is – everything around you that you call life, was made up by people that were no smarter than you. And you can change it, you can influence it, you can build your own things that other people can use.
The minute that you understand that you can poke life and actually something will, you know if you push in, something will pop out the other side, that you can change it, you can mold it. That’s maybe the most important thing. It’s to shake off this erroneous notion that life is there and you’re just gonna live in it, versus embrace it, change it, improve it, make your mark upon it.
I think that’s very important and however you learn that, once you learn it, you’ll want to change life and make it better, cause it’s kind of messed up, in a lot of ways. Once you learn that, you’ll never be the same again.”

(Go to youtube at http://www.youtube.com/embed/4oAB83Z1ydE if you do not see the embedded frame!)