I am not sure how many posts I wrote on Taleb’s Black Swan. Whatever, I was asked by EPFL to add a contribution to its relationship with start-ups. This is my eighth contribution on start-ups to the EPFL web site. Here it is:

08.05.13 – What do natural disasters and unusually successful high-tech businesses have in common? They are both statistical outliers, and they both have outsized impact. This is the concept of the “Black Swan.” 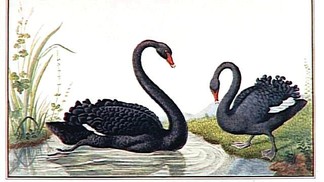 The concept of Black Swan was created by Nassim Nicholas Taleb in his works on risk and randomness and popularized by a best-seller published in 2007 and sold over 3 million copies! Taleb explains the concept of Black Swan as follows: “There are two very distinct classes of statistics. The first defines the Mediocristan, the second defines the Extremistan. Without going into much detail, the Mediocristan exceptions occur, but don’t carry large consequences. Add the heaviest person on the planet to a sample of 1000. The total weight would barely change. In Extremistan, exceptions can be everything (they will eventually, in time, represent everything). Add Bill Gates to your sample: the total wealth may increase by a factor of 10,000. The first kind is of “Gaussian-Poisson” nature with thin tails, the second kind is of “fractal” or Mandelbrotian nature, with fat tails. But note here an epistemological question: there is a category of “I don’t know” that I also bundle in Extremistan – simply because I don’t know much about the probabilistic structure or the role of large events.” The Black Swans are unknown events, in Extremistan. These events are rare, very rare, unpredictable and have a huge impact. Ironically, we tend to rationalize them afterwards. The fall of the Berlin Wall, the events of September 11th, the Fukushima accident are examples of Black Swans.

The world of high-tech entrepreneurship is particularly well described with the concepts of Taleb. We have hundreds of start-ups in Switzerland. Thousands of start-ups are founded each year around the world. But a small number grows and survives. An even smaller number will become a great success. Logitech, Swissquote, Actelion in Switzerland. But if it were only about that kind of success, using the concept of Black Swan here would be misleading. Google and Apple are two real Black Swans. The extent of the success of these two former start-ups was simply unpredictable. Many authors have tried to rationalize the success after the fact, but failed, I think. Apple market capitalization is about twice as large as any other company. Steve Jobs, an unlikely entrepreneur, founded it in 1976 at the age of 21 and even more incredibly, he saved it from disaster with his comeback in 1997. Read the new book “I’m Feeling Lucky” on Google’s first steps and you will understand the extraordinary exceptionality of its two founders, Sergei Brin and Larry Page. Google is less than 15 years old, counts more than 50,000 employees and has nearly $40B in revenue.

Taleb is very controversial and provocative. He denounces the excesses of the statistical discipline, which sometimes makes us believe in the elimination of risks. He hates the “wisdom” of scholars to the point of attacking them personally. I remember a conference where the president of the session “blamed” my great passion for high-tech start-ups which according to him is only a fraction of firms. I did not try to hide my bias, but simply pointed out to him that their impact is far from being marginal and also that the field is fascinating in the difficulty in anticipating the potential success. Passion sometimes has to prevail over reason…

Taleb drove the nail with the publication last November of Antifragile, which is subtitled “things that gain from disorder.” This book is a multifaceted, sometimes messy, work, praising the artisan, the souk and the experimenter; he also criticizes the expert, often worn because too rational. Again Taleb’s ideas fit perfectly with innovation. “The fragility of every start-up is necessary for the economy to be antifragile, and that’s what makes, among other things, entrepreneurship work: the fragility of the individual entrepreneurs and their necessarily high failure rate.”

The Black Swan may have a quite simple explanation. It often has its roots in the weaknesses (for disasters) and genius (for the wonders) of the human species. Albert Einstein, Leonardo da Vinci, Steve Jobs and Lionel Messi are creators of genius. It is possible to quantify through science and technology many phenomena, but it is still difficult to measure human capabilities. Black Swans would probably not be as unpredictable if they did not have their root in the human interference in nature.

1 thought on “The Black Swan and Start-ups”