This is my translation (well Google translation) of a very good article I read in newspapers La Tribune de Genève (pdf here) and 24 heures (pdf here). I am not sure I have the rights to do such a transaltion. I will do it the Google was and hopefully the news papers will not complain…

If you do not want to read it all, here are just two short quotes: “Some explain the excitement that prevails here because of a feeling of urgency, says Christian Simm. We must go quickly, people know they cannot work 80 hours a week for twenty years.” and
“You want to know the secret of Silicon Valley? asks Fadi Bishara, head of the incubator Blackbox. Failure is not an issue. It is completely accepted. It is even considered an apprenticeship.”

The Dream of Silicon Valley
Can the Lake Geneva area reproduce the ecosystem of the U.S. technology hub ?
by Renaud Bournoud

Often imitated, never equaled. The famous ecosystem of Silicon Valley, near San Francisco, is one of the most dynamic regions of the world. The success stories of Google, Apple and Facebook continue to fascinate, even on the Lake Geneva. But on paper, this Eldorado for innovation has much in common with our region. In a similar geographic area, a large bean sixty kilometers long, the two countries are ranked in the world’s most successful regions. If Silicon Valley is based on the prestigious universities of Stanford and Berkeley, the Lake Geneva can count on the EPFL, the Universities of Geneva and Lausanne or the IMD, the High School of Management. In both cases, the density of highly qualified people is high. Even daily commuters from Silicon Valley experience the discomfort that we know well . They also wait for hours in traffic jams. U.S. Highway 101, which irrigates the valley is as congested as the A1, between Lausanne and Geneva. Housing is also a concern that we share with them. The real estate prices are well above the U.S. average and have nothing to envy to those on Lake Geneva. So what are the ingredients that make Silicon Valley so special? 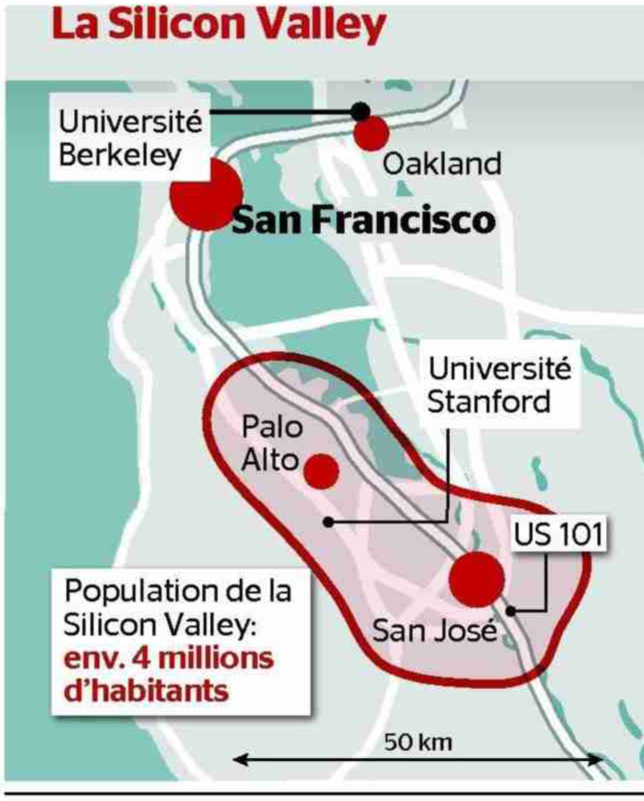 A century ago, the orange groves reigned as kings over this corner of California. Now the land has nearly four million people. More broadly, the population of the San Francisco Bay is the size of that of Switzerland. The presence of reputable universities brings a lot of talent, as well as the attraction of the region. Silicon Valley Community Foundation considers that 60% of the engineers were born abroad, many of whom are from Asia. But the valley also attracts many Americans. “Here we are at the extreme west of the United States. We cannot go further, says Christian Simm, founder of Swissnex (note: the Swiss Agency for Promotion of Science and Innovation) in San Francisco. People who consider Boston too quiet come here to create. Because everything seems possible.” This density of great talent pool is ideal for company recruitment. A startup like Square, active in payment systems, could recruit 600 programmers in less than four years. This would not necessarily be feasible in the Lake Geneva region. These people have often come alone and can concentrate fully on their work. “Some explain the excitement that prevails here because of a feeling of urgency, says Christian Simm. We must go quickly, people know they cannot work 80 hours a week for twenty years.”

A they arrived alone in Silicon Valley, people are quite willing to meet others, creating a culture of networking. Many networking events are regularly organized, like the Start Up Weekends. They also exist here, but in smaller proportions, simply because the population and the number of start-ups are lower. “It makes it easy to find a partner to build a startup,” says Ahmed Siddiqui, one of the organizers of Start Up Weekends Bay Area. “Here the world lives around the field of technology , explains Alexandre Gonthier, the boss of PayWithMyBank in Redwood City. I met my partner at the playground where I watched my children.” Not only can we can find a future partner in the sandbox, it is also easy to cross the pundits of Silicon Valley at random from a barbecue party. They are available and are ready to play mentors for younger people. “It is not as easy to meet bosses in Europe … Unless they learn that you are installed in Silicon Valley. There, the doors open,” notes Alexandre Gonthier. Contacts are natural, and the mentality towards failure also has a role. “You want to know the secret of Silicon Valley? asks Fadi Bishara, head of the incubator Blackbox. Failure is not an issue. It is completely accepted. It is even considered an apprenticeship.” And if the project does not fail, it will soon be on the market. “The minimum viable product” is the leitmotif of the Silicon Valley. “We need to create something simple that you can use right away,” says Solomon Dykes, the founder of the start-up Dotdoud in San Francisco. “I would add that the idea is not very important, Fadi Bishara continues. Googje invented nothing, there were already search engines. What matters is the “packaging”, how the project is sold.” It’s the reason why storytelling is used a lot to sell. These stories also serve to develop an entrepreneurial spirit. Many myths have grown from Silicon Valley. There is the famous story about the birth of startups in garages. Like, for exampl , Google, which had rented a garage, whereas it had already raised $ 1 million.

Good idea or not, nothing is possible without money. The region of Silicon Valley attracts 46% of venture capital in the United States, according to the Bay Area Council Economic Institute. This happens especially much earlier in the development of projects than here.” If, after a year , the start -up has not found funding , we believe that we need to move on,” adds Jeff Burton , director of Skydesk , an incubator located on the Berkeley campus . “For us, the institutional money comes much later, said Joao Antonio Brinca, representative of BCV board at the Foundation for Technological Innovation in Lausanne. Financing through venture capital funds typically occurs between the fifth and seventh year of the project life. “The sums involved are not the same. A young company of Lake Geneva can hopee to raise between 300,000 and 600,000 francs for its first round of funding. In Silicon Valley it is at least twice. So there is a gap between the first efforts of startups to exit the academic world and the interests of investors . This longer period may explain the difficulty of transforming research into marketable products. Another advantage of Silicon Valley is its close proximity maintained between universities and private firms. In this regard, the Lake Geneva is still lagging behind. But it would be wrong to say that nothing is done about it. EPFL has worked in recent years to attract firms in the area of innovation, so that they mingle with the start-ups. But again, the structures of the same type that abound in Silicon Valley are favored by the scale. The density of start-ups produces a unique emulation world. Also keep in mind the economy of scale to explain this difference. A U.S. start -up happens in a domestic market of 320 million potential customers. In Switzerland, an emerging company has to deal with a much smaller market, divided into three languages and twenty- six cantons.

This article was produced as part of a tour organized by BCV for ten young Vaudois.

1 thought on “The Dream of Silicon Valley”