Here is my new contribution to magazine Entreprise Romande, which they entitled “Let the Expression of Energies Emerge from the Youngest Age.” 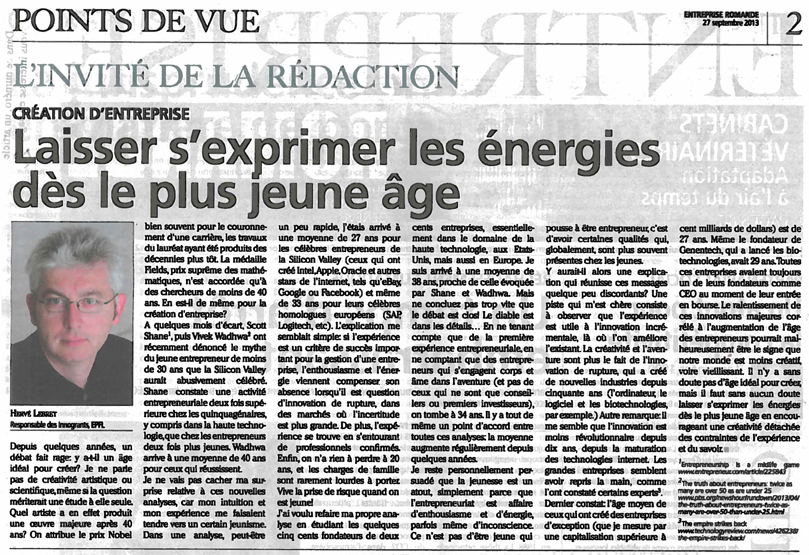 In recent years, there’s been a recurrent debate: is there an ideal age to create? I ‘m not talking about artistic and scientific creativity, even if the question deserves a study in itself alone. What artist has indeed produced a major work after 40 years? The Nobel Prize is often awarded for the culmination of a career, but the work had been produced decades earlier. Finally, the Fields Medal, the highest prize in mathematics, is given to individuals who are under 40 years. Is it the same for the creation of business? In a few months, Scott Shane [1], and Vivek Wadhwa [2] have recently denounced the myth of the young under-30 entrepreneur that Silicon Valley would have unduly celebrated. Shane finds entrepreneurial activity twice as much with individuals in their fifties, including in high technology, as with young entrepreneurs. Wadhwa concludes with an average of 40 years for those who succeed.

I will not hide my surprise with these new analyzes because my intuition and my experience made me move towards a cult of youth. In an analysis, – perhaps a little fast-, I had found an average of 27 years for famous entrepreneurs in Silicon Valley (those who founded Intel, Apple, Oracle and other stars of the Internet such as eBay, Google or Facebook ) and even 33 for their famous European counterparts (SAP , Logitech, etc.) The explanation seemed simple: if the experience is an important criterion of success for the management of a company, enthusiasm and energy will compensate for its absence when it comes to breakthrough innovation in markets where uncertainty is greater. In addition, the experience can be provided by surrounding oneself with experienced professionals. Finally one has nothing to lose and family responsibilities are seldom hard to bear when being 20-year old. Enjoy risk-taking as long as you are young! 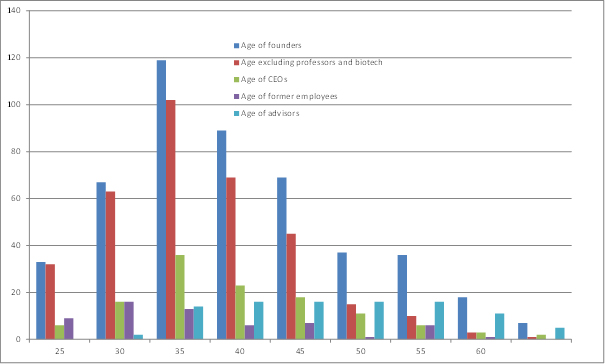 I decided to do again my own analysis by studying the 500 founders of 200 companies, mainly in the field of high technology in the U.S. but also in Europe. I got an average of 38 years, similar to that suggested by Shane and Wadhwa. But do not conclude too quickly that the debate is over! The devil is in the details… By considering only the first entrepreneurial experience, counting only entrepreneurs who commit their body and soul in the adventure (and not those who are advisers or early investors) it drops to 34 years. There is however a point of agreement between these analyzes: the average has been steadily increasing in recent years. 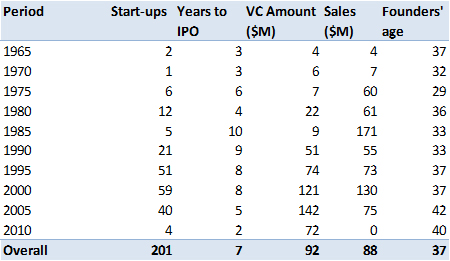 I still personally believe that youth is an asset, simply because entrepreneurship is about enthusiasm and energy, and sometimes unconsciousness. Entrepreneurship is not about being young so much as what motivates to be an entrepreneur, is to have certain qualities which, overall , are more often found in young people. Would there be an explanation that bring closer these rather discordant findings? An idea that is dear to me is to see that experience is useful for incremental innovation, where one improves what already exists. Creativity and adventure are related to disruptive innovation, which has created new industries for 50 years (computers, software and biotechnology for example.) Another remark: I think innovation has been less revolutionary in the last 10 years, since the maturation of internet technologies. As a consequence, large companies seem to have taken the hand, as some experts noticed [3].

Last observation: the average age of those who have created exceptional companies (I measure it with higher than $100 billion capitalization) is 27 years. Even the founder of Genentech, the company which was at the origin of biotechnology, was 29 years old. All these companies still had one of their founders as CEO at the time of IPO. The slowdown in major innovations correlated with the increasing age of entrepreneurs could unfortunately be a sign that our world is less creative because older. There is probably no ideal age to create, but we must encourage the expression of enthusiasm and energy from an early age by encouraging creativity, loose from the constraints of experience and knowledge.

References:
[1] Entrepreneurship Is a Midlife Game http://www.entrepreneur.com/article/225843
[2] The Truth About Entrepreneurs: Twice As Many Are Over 50 As Are Under 25 http://www.pbs.org/newshour/rundown/2013/04/the-truth-about-entrepreneurs-twice-as-many-are-over-50-than-under-25.html
[3] The Empire Strikes Back. http://www.technologyreview.com/news/426238/the-empire-strikes-back/

On a similar topic, I was a little puzzled by a short article I mention here, from Swiss magazine Bilan. The future, a question of youth (link to French article: L’avenir, affaire de jeunes, by Stéphane Benoit-Godet)

The future, a question of youth
Google wants to extend the lives of people and defeat death. An event that has not been so noticed. Yet it is not only an announcement effect. The possibility of downloading our own memory in thirty years so that a part of us can survive represents a formidable challenge to humanity and creativity.
Is this crap? There are many “deniers of progress”, those who fight in vain their time because they do not understand its implications. There is however an exciting movement in the science that envisions o convergence of engineering, information science and neuroscience.
Patrick Aebischer is a pioneer in Europe with the vision he imposed at EPFL. Others work hard at the convergence of these different techniques to get to the mother of all scientific epics, the understanding of the brain.
If Google decides to work at this breakthrough, we must be interested because the resources the Silicon Valley firm dedicates to its special projects division are enormous. And when it comes to processing data on a gigantic scale, its founders are experts.
Henry Markram who has raised 100 million from the EU for his Human Brain Project at EPFL also fits perfectly in this revolution. What has been made possible here thanks to the will of one man – Patrick Aebischer had a good part of the establishment against him when he arrives at the EPFL – has spread further.
If Larry Page and Sergey Brin, at Google, dare to embark on this adventure, it is because they are immersed in the bath of innovation that is Silicon Valley. The place where are created start-ups that disrupt social interaction (Facebook), technology (Apple), how to learn (Twitter), move (Tesla and SpaceX) or consume (PayPal).
Ironically, the head of that company, David Marcus, a Geneva serial entrepreneur who moved to California, is shaping the future of money when Swiss bankers have never been in such bad shape.
This culture is still missing here. The trigger is perhaps encourage people in their 20s and under to start their own business. As the crazy visionaries in Silicon Valley who have a mission to improve the lives of people, the desire to create and the entrepreneurial enthusiasm could lead to huge success.