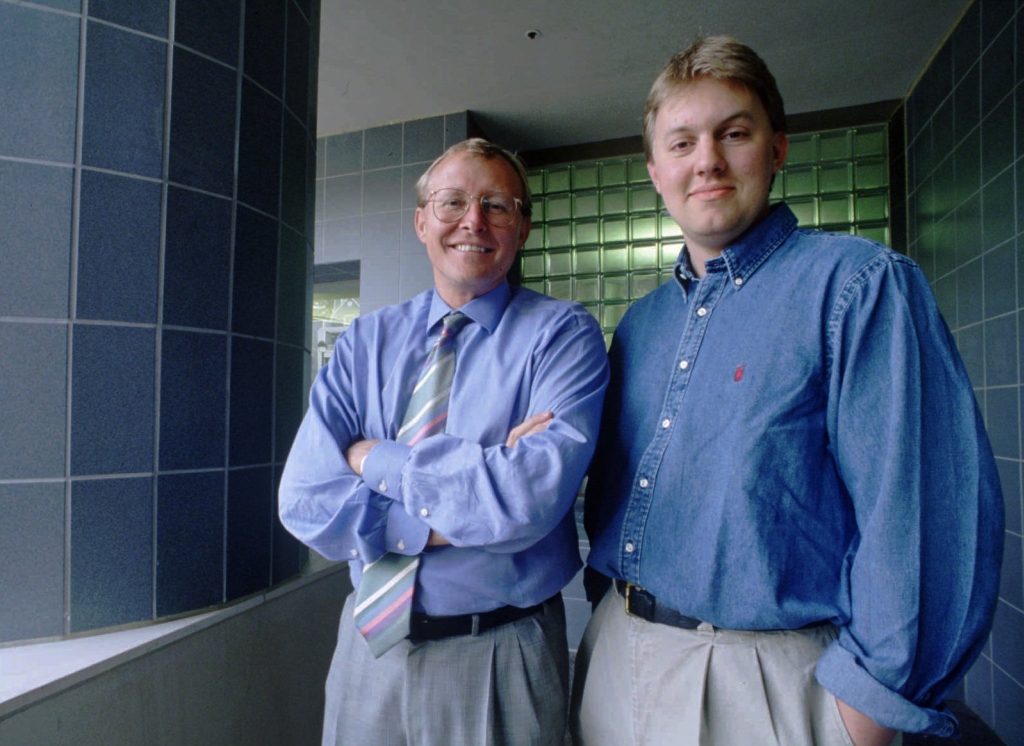 Marc Andreessen and Jim Clark, the founders of Netscape

You may not know I owe a lot to Nesheim’s High Tech Start Up, which cap. tables I took inspiration from. If you do not know Nesheim’s, let me just quote Steve Blank’s in his bibliography for 4 steps to the Epiphany: “High Tech Start Up is the gold standard of the nuts and bolts of all the financing stages from venture capital to IPOs”.

There was one such cap. table which was striking to me and I never mentioned it until now. Here it is now scanned from Nesheim’s book. I did not ask for authorization but I hope not to get in trouble! 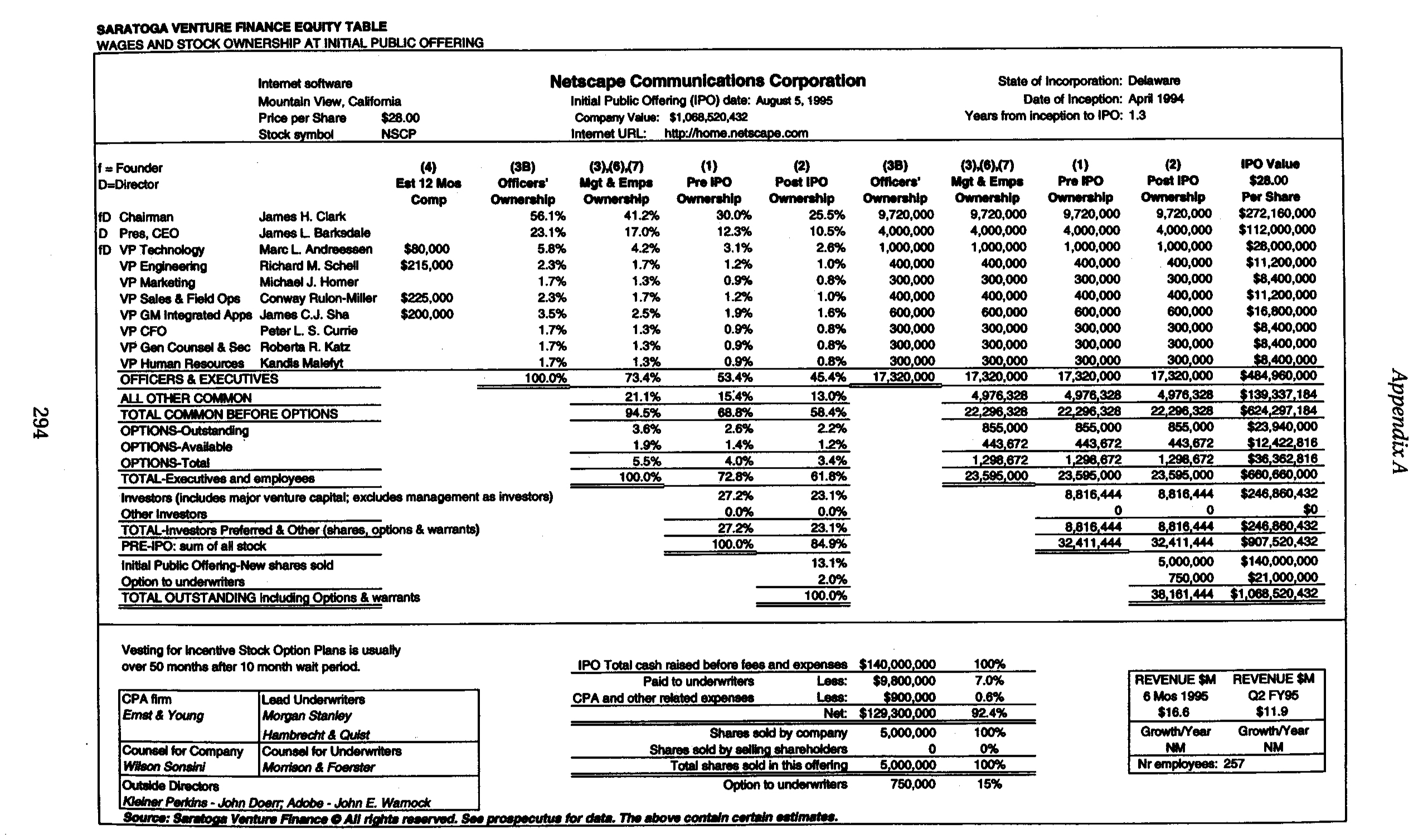 Do you see why I found it striking? If not have a look again. If not again, follow me for a few minutes. I decided to look for Netscape IPO prospectus, which I could find in two formats, an html IPO prospectus on the Internet archive as well as a pdf S-1 filing document. They give slightly different data, but I could build my own table as follows. 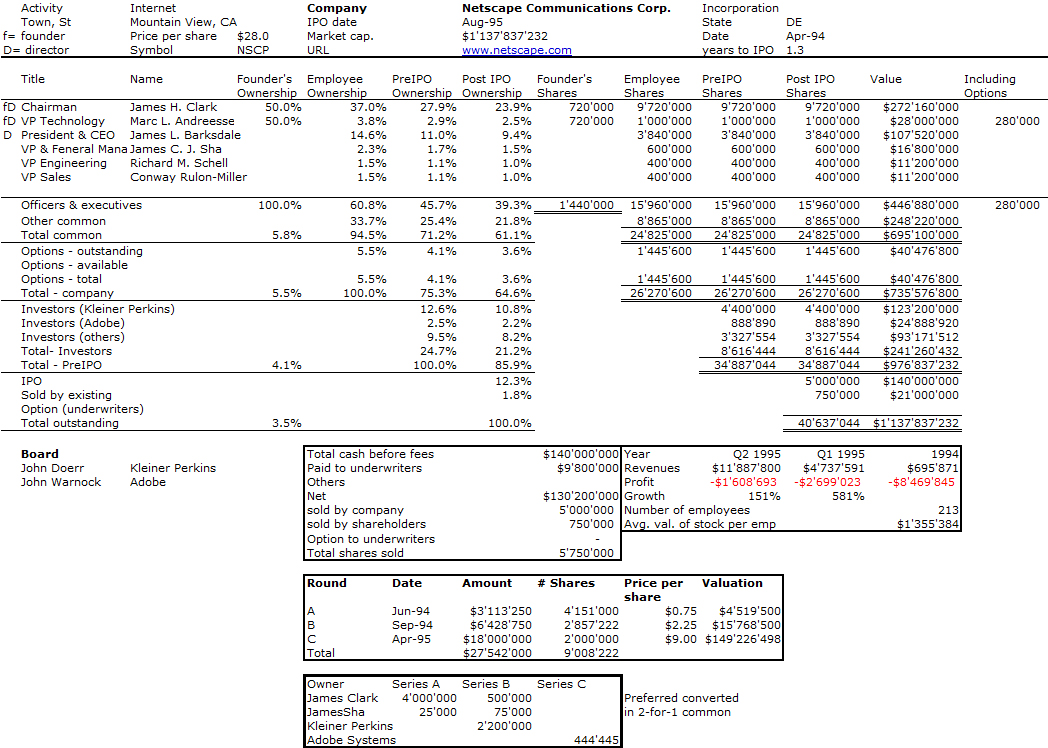 And now? Well I had never understood why the two founders, James Clark and Marc Andreessen could have such a different amount of equity. How could it be a 10x difference even if James Clark was a more experienced entrepreneur (he was a former Stanford professor and co-founder of Silicon Graphics) and Marc Andreessen had no experience but was the author of Mosaic, the predecessor of Netscape as a browser. (Netscape is a sad illustration of bad relationships between a university – the University of Illinois – where a technology was developed and entrepreneurs, but this is another story.)

Well I found the answer thanks to the two documents: Jim Clark was
– first, a co-founder and both founders had 720’000 founders’ shares and
– second, a business angel: he invested $3M in the series A and then $1.1M in the series B. He got the equivalent of 9M commmon shares for his investment.

This comforts me in the general explanation I usually give about sharing equity between founders and then investors, managers, employees as you may see in Equity split in start-ups or on Slideshare. First founders split equity based on their non-cash contributions, then investments are taken into account.