Here was my last column in 2013 for Entreprise Romande, with a subject that is dear to me, the importance of migrants. 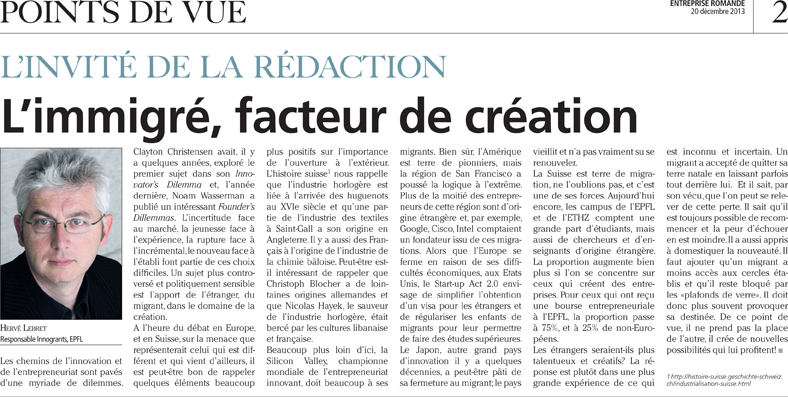 The paths of innovation and entrepreneurship are paved with a myriad of dilemmas. Clayton Christensen a few years ago had explored the first topic in his Innovator’s Dilemma and last year Noam Wasserman has published the interesting Founder’s Dillemmas. The uncertainty of the market, youth vs. experience, disruptive vs. incremental innovation, the new vs. the established are just a few examples of these difficult choices. A more controversial and politically sensitive subject is the contribution of migrants and foreigners in the field of creation.

Just when he debate is growing in Europe as well as in Switzerland about the threat that would represent those who are different and come from elsewhere, it is perhaps worth remembering more positive elements about the importance of openness to outsiders. The Swiss history [1] reminds us that the watch industry is linked to the arrival of the Huguenots in the sixteenth century; a part of the textile industry in St. Gallen has its origin in England. There is also a French origin in the Basel chemical industry. Perhaps it interesting to recall that Christoph Blocher has distant German roots. But what about Nicolas Hayek, the savior of the watch industry, rocked by his Lebanese and French cultures.

Much further, Silicon Valley, the world champion of innovation and entrepreneurship, owes much to its migrants. Of course America is a land of pioneers, but the San Francisco area pushed the logic to an extreme. More than half of the entrepreneurs in this region are of foreign origin and for example Google, Yahoo, Intel had founders with foreign roots.

While Europe has a temptation of closing its doors due to its economic difficulties, in the United States, the Start-up Act 2.0 intends to streamline visas for foreigners and to regularize children of migrants to enable them to enter higher education. Japan was another major country for innovation a few decades ago nut it may have suffered from its low level of migration; the country is aging and has not really reinvented itself.

Switzerland is a land of migration, let us not forget it. This is one of its strengths. Today, the campus of EPFL and ETHZ have a great deal of students but also of researchers and teachers with foreign origin. The proportion increases much more if you focus on those who create businesses. For those who have received an entrepreneurial scholarship to EPFL, the proportion rises to 75% including 25 % of non-Europeans.

Would foreigners be more talented and creative? The answer is rather a larger experience of what is unknown and uncertain. Migrants have agreed to leave their homeland, sometimes leaving everything behind. And they know by experience that we can recover from this loss. They know well that it is always possible to start again and the fear of failure is reduced. He also learned to domesticate novelty. It should be added that a migrant has less access to established circles and is stuck by “glass ceilings”. They must often build they destiny. From this point of view, they do not take the jobs of anyone, they create new opportunities, that will become beneficial to others!