Two EPFL entrepreneurs asked me what I thought of the Everpix story. If you do not know it, you should read the following links:
– A very good article from the Verge: Out of the picture: why the world’s best photo startup is going out of business. Everpix was great. This is how it died.
– A very detailed account of the Everpix story by its founders on Gifthub with tons of documentation and archive: Everpix-Intelligence

I knew some actors: Pierre-Olivier Latour is an EPFL alumnus whom I met during my Index years and again in 2006 when I visited Silicon Valley with the future founders of Jilion. Neil Rimer, one of the investors in Everpix was my boss before I joined EPFL. 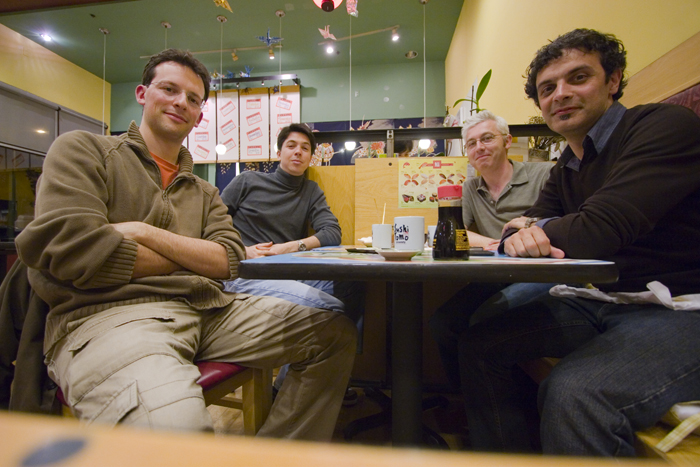 From left to right, Zeno Crivelli, Pierre-Oliver Latour, myself and Mehdi Aminian in 2006 in Silicon Valley.

The story will certainly feed the recurring debate about taking VC money or not, and I think it is a bias debate! You can read my recent posts about Founders Dilemmas, which address the issue:
– The Founder’s Dilemmas – The Answer is “It depends!”
– Swiss Founder’s Dilemmas
Again taking VC mmoney is not an easy thing. It is tough to get and when you have it, the constraints increase. You can watch the video Venture Capital Is a Time Bomb from the founder of 37signals if you do not know what I am talking about.

I think the debate is biased because it is not about VC vs. no VC. Not many entrepreneurs have the choice of not taking investor money (Business angels are not that different from VCs.) It is about do you want to have an impact and grow (then you often need investors) OR do you want to control and stay independant. And it is often OR not AND… I know many people (including entrepreneurs and investors) disagree with me. My recent experience has not changed this belief that I’ve had for 15 years.

You should read Founders at Work if not already. One of them claims: “VCs? you can’t live with them, you can’t live without them.” I think this is closer to the truth. He said exactly: “VCs are an interesting bunch; you can’t live with them, you can’t live without them. They are instrumental in your success because they give you money and a really strong endorsement. They have this mafia-like network of connections and they help you with deals and find the right executives. They are really working your case. In my experience, it rarely happens that they turn against you, because you’re a team and if the team isn’t working, the company will likely fail. Occasionally, when you’re a screw-up, they’ll have to make a tough decision and fire someone, but that’s rare in my opinion. Because they wouldn’t invest in your company if they didn’t believe in you and your team. So I’ve always had a good experience working with VCs.”

So back to Everpix. I do not really have a point of view as I did not know the details. But let me quote both actors from The verge article: “The founders acknowledge they made mistakes along the way. They spent too much time on the product and not enough time on growth and distribution. The first pitch deck they put together for investors was mediocre. They began marketing too late. They failed to effectively position themselves against giants like Apple and Google, who offer fairly robust — and mostly free — Everpix alternatives. And while the product wasn’t particularly difficult to use, it did have a learning curve and required a commitment to entrust an unknown startup with your life’s memories — a hard sell that Everpix never got around to making much easier.” “It succeeded in every possible way,” said Jason Eberle, who built the web version of Everpix, “except for the only way that matters.”

While the investors point was: “While the product was clearly superb and had a very small but very loyal following, we were not comfortable enough with the other aspects of the business to kick up our level of investment,” said Neil Rimer, adding, “Having a great product is not the only thing that ultimately makes a company successful.” There is the remaining issue of how much value creation VCs want and can all entrepreneurs address it: “You guys seem to be a spectacularly talented team and some informal reference checking confirmed that, but everyone here is hung up on the concern over being able to build a >$100M revenue subscription business in photos in this age of free photo tools.” Said a partner at another firm: “The reaction was positive for you as a team but weak in terms of whether a $B business could be built.”

The debate will no doubt continue, but it is close to what can inspire me this story. Not to forget the conclusion of Latour: “I have more respect for someone who starts a restaurant and puts their life savings into it than what I’ve done. We’re still lucky. We’re in an environment that has a pretty good safety net, in Silicon Valley.”