Here is my regular column in Entreprise Romade. This time, the impact of the vote on February 9… 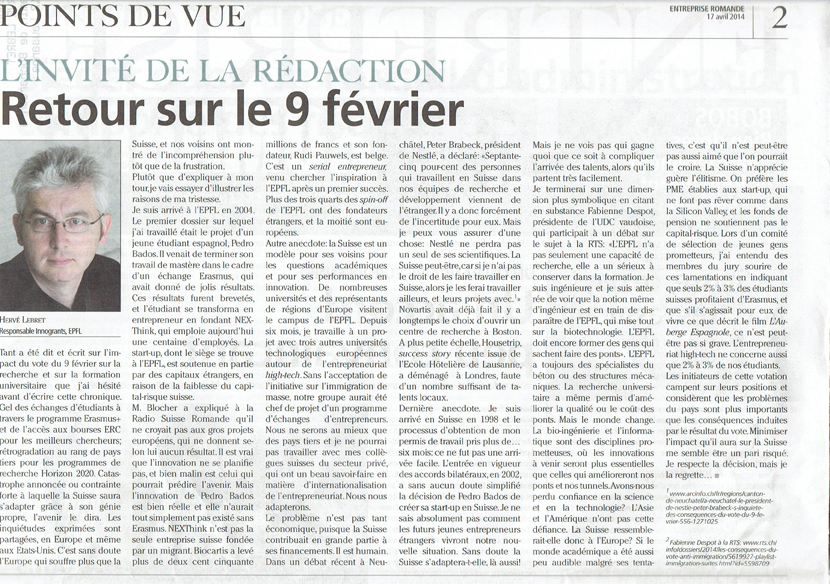 So much has has been said and written about the impact of the vote on Feb. 9 on academic research and education, that I have hesitated before writing this column. Freezing of the exchange of students through the Erasmus + program and the access to ERC grants for top researchers; degradation to the rank of third country in the Horizon 2020 research programs. All this was well explained and should be known to those who are or feel concerned. Foretold disaster or major constraint to which Switzerland will adapt through its own genius, the future only will tell. Finally, the people are sovereign and the concerns expressed trhough the vote are fairly shared, in Europe and even in the USA. Europe suffers probably more than Switzerland and our neighbors have shown their misunderstanding rather than frustration.

So I will just try to illustrate here the reasons for my sadness. A simple anecdote to start: I arrived at EPFL in 2004. The first file on which I worked was the project of a young Spanish student, Pedro Bados. He had just finished his master’s thesis as part of an exchange program and his work had produced some nice results. These results were patented, and the student turned into an entrepreneur when he founded NEXThink which today has about one hundred employees. The start-up, which is headquartered on the EPFL campus, is supported in part by foreign capital due to the weakness of the Swiss venture capital scene.

Mr. Blocher had told Radio Suisse Romande he did not believe in big European projects that do not work. It is true that innovation can not be planned and very clever is the one who can predict the future. But Pedro’s innovation is real however and simply would not have existed without Erasmus. NEXThink is not the only Swiss company founded by a migrant. Biocartis has raised over CHF 250 million and its founder Rudi Pauwels, is Belgian. He is a “serial entrepreneur” who had come to seek inspiration at EPFL after a first success. More than three quarters of the spin-off EPFL have foreign founders, and half are European.

Another anecdote: Switzerland is a model for its neighbors in academic matters and for its innovation performance. Many universities and representatives from European regions visit the EPFL campus. For six months, I have been working on a project with three other European technological universities on high-tech entrepreneurship. Without accepting the intiative on mass immigration, we would have been the project leader of an exchange program for entrepreneurs. We will not be better than a third country and I can not work with my Swiss colleagues from the private sector who have a good knowledge in the internationalization of entrepreneurship. We will adapt…

The problem is not so much economic as Switzerland contributed largely to the funding of these programs. It is human. In a recent debate in Neuchatel, Peter Brabeck, chairman of Nestlé, said: “75% of people working in Switzerland in our research and development teams are foreigners; this vote is creating a lot of uncertainty for them. But I can assure you of one thing: Nestlé will not lose a single one of its scientists. But Switzerland perhaps. Because if I do not have the right to employ them in Switzerland, so I will have them work elsewhere on their projects” [1]. Novartis had already made long ago the choice to open a research center in Boston. On a smaller scale, HouseTrip, a recent success story from the Lausanne Hospitality School, moved to London, because of the lack of local talents.

Last anecdote: I arrived in Switzerland in 1998 and the process of obtaining my work permit took more than six months…; it was not an easy arrival. The entry into force of the bilateral agreements, in 2002, certainly simplified the decision of Pedro Bados to create his start-up in Switzerland; no doubt. I have no idea how future young foreign entrepreneurs will experience our new situation. Switzerland will probably adapt here too! But I do not see who wins anything at complicating the arrival of talents whereas they leave very easily.

I finish on a more symbolic dimension by quoting a participant in another debate on the subject [2]: “And to return to the question of research, EPFL has not only research capacity, it has a serious mission in training. I’m an engineer and I am amazed to see that the very notion of engineer is disappearing when the EPFL is now staking everything on biotechnology. I’d like to see EPFL still train people how to build bridges.” If the academic world has been so little audible despite its attempts, it is perhaps because it is not as well liked as you might think. Switzerland does not like elitism. One prefers established SMEs to start-ups, which do not make people dream as in Silicon Valley and pension funds do not support the venture capital. When I attended a selection committee of promising young people, I heard the jury member smile while indicating that only 2-3% of Swiss students benefited from Erasmus and if it was for them to live what describes the movie “L’Auberge Espagnole” (The Spanish Inn), this may not be so bad. Yet high-tech entrepreneurship also concerns only 2-3% of our students. Scarcity and elitism, I think, are more important than you think.

EPFL did not stop training specialists of concrete or mechanical structures. Academic research has even improved the quality and cost of bridges. But the world is changing too. Bioengineering, computer science are promising and future innovations in these disciplines will be much larger than those that improve our bridges and tunnels. One does not need to be a genius to understand this. Except if we have lost faith in science and technology? I can tell you that Asia and America have not lost that confidence. Would Switzerland be like Europe?

I understand that the initiators of the referendum are sticking to their positions and consider that the country’s problems were more important than the consequences thereof. Expressing a frustration in front of a Europe in crisis or a concern for the future is one thing. Minimizing the impact this will have on Switzerland seems to be a risky bet. I respect the decision, but I regret it… badly.