The Internet is only a reflection of technological change and globalization. As with these two issues, social and political tensions have naturally emerged, but are even more acute because of the specifics of the Network and the revolution it created in much less time than the previous World developments. (I will add below that the disappointments caused by excessive expectations from technology have also played a role.) 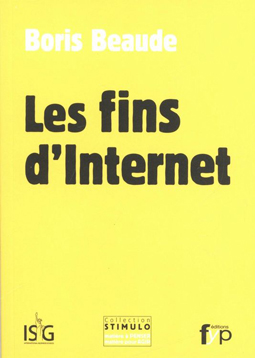 The cover page of the book The Ends of the Internet says that the Internet has revolutionized the world in the fields of information, production, collaboration and transactions. Its author, Boris Beaude, is a geographer by training, which is an important point for the topic addressed here. Beaude has a strong contribution to the discussion about the constraints created by the Network. It is synthetic, and detailed, thanks to a short book (95 pages) however dense and exciting.

(I would not say the same of Evgeny Morozov’s book, To Save Everything, Click Here, which is also dense on related subjects, but too provocative or extreme to be totally convincing. I might come back on that book later in another post.) 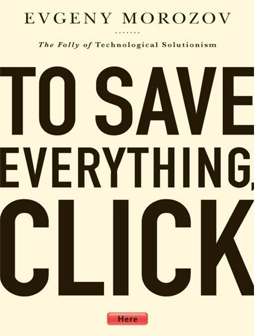 The Internet (just like globalization) has revolutionized the World (page 15) by re- balancing the priorities (and re-creating tensions) between:

Beaude also mentions (page 24) problems linked to:
– Freedom of expression,
– Collective intelligence,
– Openness,
– Decentralization,
– Neutrality,
which are the topics of his chapters.

The Internet thus disturbs the local values in the territories, but the Internet (which is “a proper name just as well as France or the European Union” – page 14) is anything but virtual; it is an intangible space. Yet it must be able to survive private interests. The Internet makes distance (and time) less relevant without abolishing them, which “makes clear its disjunction with the plurality of territorial spaces” (page 23). It disrupts the States that have put some values higher than freedom (safety, property in the USA to which must be added dignity, privacy in Europe). Beaude is geographer!

He adds: “A common space for humanity is clearly not enough to spontaneously create common values. But the social contracts are at the heart of politics. They offer to give up freedoms by collectively delegating authority in the name of freedoms seen as more fundamental” (page 29). See the “my freedom ends where someone else’s begins.” The Internet is both a space of freedom and space of absence of law (intellectual property, widespread surveillance, private use of the data; the list is long.)

And this is where is one of the worst issues – among others. Not only in the world of the Internet, but also in the field of technological innovation where experts often impress politics and society. This creates a tension between the individual and society, between private and public entities, between experts and decision makers. “The computer code is now the law” (page 47).

About Collective Intelligence: “Believing in the potential of individuals is precisely not to believe in one only, and it is to accept individual fallibility, while recognizing the power of appreciation that resides in anyone” (page 38). Then follows a section on democracy and “its difficulty in organizing common will/good with individual will/good” (and the famous, the “worst system except for all the others.”) In addition, the largely minority character of the contributors to the collective intelligence on the Internet (e.g. 0.0002 % of users for French-speaking Wikipedia) is an additional limit, not to mention the loss of their independence and the privatization of this intelligence (pp. 40-46).

You should also read his excellent synthesis on free and property. The emerging intellectual property concepts of Copyleft and Creative Commons. Free only exists because a third party pays; not only advertising but also sponsors in the case of Wikipedia or Mozilla. This is not so new since both Press and TV used these methods. It is just a matter of scale and strong dematerialization. The minimal costs of copying and transmission revolutionize the world, but the initial production of goods must still be financed. Netflix and Spotify show that new models are possible, but only if only the aggregator or distributor is correctly paid, the content producers may disappear if not in quantity, at least in quality… And at the same time, Beaude reminds us that free is also a freedom factor.

Another subtle topic: hypercentrality (Google, Facebook, Twitter) poses fantastic problems, not least being the circumvention of laws and taxation (page 75). For example, the “weak links” (those which are neither daily nor intense) are also essential. And threatened?

Beaude interestingly mentions the Fourth Amendment of the U.S. Constitution, which requires a warrant for any search. It raises the constitutionality of the monitoring carried out by the NSA (page 81).

How has the Internet reached the point where the results of Google and Twitter differ depending on the country and offers by iTunes, Netflix or YouTube are different or even inexistent with geography? (Page 85). This missing neutrality will lead to the neutralization of the Internet, even its death (page 89). “Neutrality and self-organization are part of the libertarian options […] and are inconsistent with politics. […] Humankind must seize this opportunity to revisit what we consider to be important, really important. […] The challenge is unusually complex. We will have to choose between the end of the Internet and the globalization of politics” (pp. 91-93).

As usual my synthesis is imperfect, but if you’re interested or intrigued, read Beaude!

Finally, and this is not quite the subject of Beaude, there is also some disappointment with the promises of technology and the Internet in particular… Just read again Thiel’s motto – “We wanted flying cars, instead we got 140 characters” – that I have already mentioned here. This only would not be so bad. But then what about the citation of the former CEO of TF1 – “what we sell to Coca-Cola is human brain time made available. […] Nothing is more difficult than getting this availability” – or that of Jeff Hammerbacher (thanks Martin for the reference): “The best minds of my generation are thinking about how to make people click ads, that sucks.” Which brings me back to Morozov whose arguments on centrism and solutionism of the Internet seem very excessive. It is not the exaggerate promises of the Internet that are so much delusional, but the risk of drift and disappearance of the Internet that is the real problem – but this is another topic!