Is this a strange time or am I growing old? The point is my recent readings were not optimistic views of high-tech entrepreneurship or of Silicon Valley. I just think of
– Horowitz’s The Hard Thing about hard Things,
– Morozov’s To Save Everything, Click Here (which is so negative, I have not written a post yet!)
– HBO’s Silicon Valley – nice & funny but slightly depressing.

In a way there’s always been creations which were not absolutely optimistic, but there was always some positive point. I think of
– Bronson’s The First $20 Million Is Always The Hardest,
– Edwards’ I’M Feeling Lucky – Falling On My Feet in Silicon Valley,
– the very good Harboe Schmidt’s The Ultimate Cure or
– even very short and funny The Anorexic Startup by Mike Frankel. 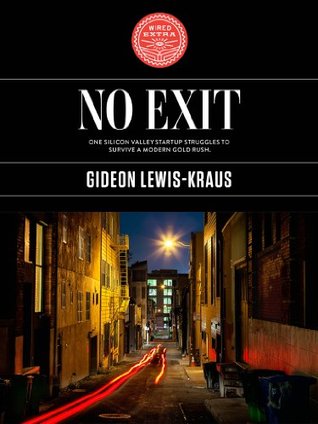 Now I just read No Exit, Struggling to Survive a Modern Gold Rush by Gideon Lewis-Kraus (thanks David!). The passion, the excitement have disappeared. The entrepreneurs are honest enough to show they are exhausted. And the gold rush again will have more casualties than winners.

I initially thought it was a fiction, but the author is a journalist for Wired. That’s why my initial reaction was it’s not a good work, I could not see the style, the rythm. After I understood it was not fiction, I was less negative, thought it’s not the best document I’ve read. But here are some interesting quotes/lessons.

“The Valley has successfully elaborated the fantasy that entrepreneurship – and, more broadly, creativity – can be systemized; this is the basic promises of accelerators (Ycombinator et al.) that success in the startup game can be not only taught but rationalized, made predictable.” (31/847 – Kindle reference) and later “Silicon Valley’s most bought book, Eric Ries’ The Lean Startup, is a spirited pamphlet of winning exhortations to hunger, speed, agility, and unsentimentality. Almost every founder in Silicon Valley has read the first 30 pages of that book.” (618/847) If you do not know the book, it’s about spending little and pivot fast and I agree there is something wrong about all these fantasies. Indeed even Steve Blank agrees now. Check Blank’s statement about learning entrepreneurship.

Even worse, “[…] the Series A crunch. Due in part to the rise of startup accelerators like Y Combinator, as well as to the surplus capital washing around the Valley from recent IPOs, it has never been easier to raise a small amount of money, say $1 million. And it has never been easier to build a company—especially a web or mobile product—from that small amount of money, thanks in part to the proliferation of cheap, easy development tools and such cloud platforms as Amazon Web Services. But the amount of “real” VC funding (i.e., Series A rounds) to be allocated hasn’t kept pace. The institutions that write the big checks, those that might support and sustain real growth, can survey what a hundred companies have managed to do with a small check and put their real money on the propositions that promise the greatest yield with the least risk” (41/847) and “The problem in 1999 was that to get $5 million you didn’t need very much. You needed one or two Stanford résumés, an idea for a prototype, and a live body to give the money to.” It’s hard to get that $5 million now in part because it’s so easy to get $500,000, especially if you’re coming out of an accelerator. One way to look at it is that the $5 million that went to one company of 10 people in 1999 is now going to 10 companies of two people. You’ve lowered the bar 10X” (753).

And the consequences are slightly different… “The Valley is the place where the astounding success of the very few has been held out to the youth in exchange for their time, their energy and, well, their youth” (60). “You know the odds on any given company’s success are long, but that’s why you make a lot of bets. In the first dotcom boom, the risk was largely carried by the investors. Now that the financiers have gotten a grip on the market, and specialized engineering knowledge has become a commodity, the risk has been returned to the youth” (760). “The worst thing is that these guys get their funding tomorrow and are stuck doing this for another year. So far, they only lost one” (778).

His comments are right, but isn’t this true of any bet you make in life, becoming an artist, a scientist. You can go for a safer life for sure. Lewis-Kraus is pessimistic, he sees the people who do not win. And this exists anywhere people try. I have more optimistic views. Even if I know it is a tough experience… I prefer what Latour said of his experience with Everpix: “I have more respect for someone who starts a restaurant and puts their life savings into it than what I’ve done. We’re still lucky. We’re in an environment that has a pretty good safety net, in Silicon Valley.”

A final quote I liked (related to my previous post about age): “There’s been a lot written recently about the age divide in Silicon Valley, but even the more thoughtful pieces — such as those in The New York Times Magazine and The New Republic — tended to miss the obvious: Older people don’t typically work at startups because they have families and can no longer stomach the perpetual crisis. It’s exactly the same reason that people in their fifties tend not to be magazine freelancers or underground-club bassists. As one investor put it to me, When I see a 40-year-old in a Series A meeting, I want to pull him aside, put my hand on his shoulder, and tell him to just go get a job.” (706).

PS: it’s still a challenge for me to read an e-book all the more with these references which are not pages anymore. So I cheated, created a pdf and printed the stuff to take notes and later copy/paste the pdf…