I just began two books which might be the two most important start-up books of (September) 2014. Surprise, surprise, one is about Google, the other one written by Peter Thiel. I will certainly come back to talk about them individually but let me just give two quotes from their first pages which are surprisingly similar… 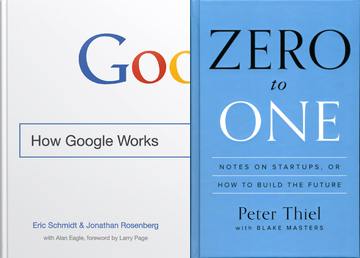 In How Google Works, Larry Page explains: “When I was younger and first started thinking about my future, I decided to either become a professor or start a company. Either option would give me the freedom to work from first principles. This autonomy of thought is behind almost everything we do at Google, behind our greatest successes and some of our impressive failures.” [Page xiii]

Peter Thiel says in Zero to One: “The paradox of teaching entrepreneurship is that such a formula necessarily cannot exist; because every innovation is new and unique, no authority can prescribe in concrete terms how to be innovative. Indeed, the single most powerful pattern I have noticed is that successful people find value in unexpected places, and they do this by thinking about business from first principles instead of formulas.” [Page 2]

More to come about
– How Google Works by Eric Schmidt and Jonathan Rosenberg – Grand Central Publishing (September 23, 2014)
– Zero to One: Notes on Startups, or How to Build the Future by Peter Thiel and Blake Masters – Crown Business (September 16, 2014)