Two minor events drive me to write a minor post about monopoly or competition. What’s best? On the one hand, I just read an article about the poor status of the patent landscape and how to improve it. On the other hand, I listened yesterday Peter Thiel – yes, the same Peter Thiel I have so often mentioned already here – in a class he gave at How to Start a Startup? So what’s the link?

Well a patent is a monopoly given by the authorities as an incentive to innovate (just check http://en.wikipedia.org/wiki/Patent). But some authors, in particular Boldrin and Levine, claim this is an “unnecessary evil”. I just read again my notes about their Against Intellectual Monopoly and their arguments are strong. In fact, capitalism in general considers competition is good and monopoly is bad.

But Peter Thiel has different views. Just check two slides from his talk below. Peter Thiel, a famous libertarian, claims that start-ups should look for monopolistic positions! What a strange paradox… I honestly do not know who is right! probably, as Boldrin and Levine wrote, “in media stat virtus, et sanitas”. 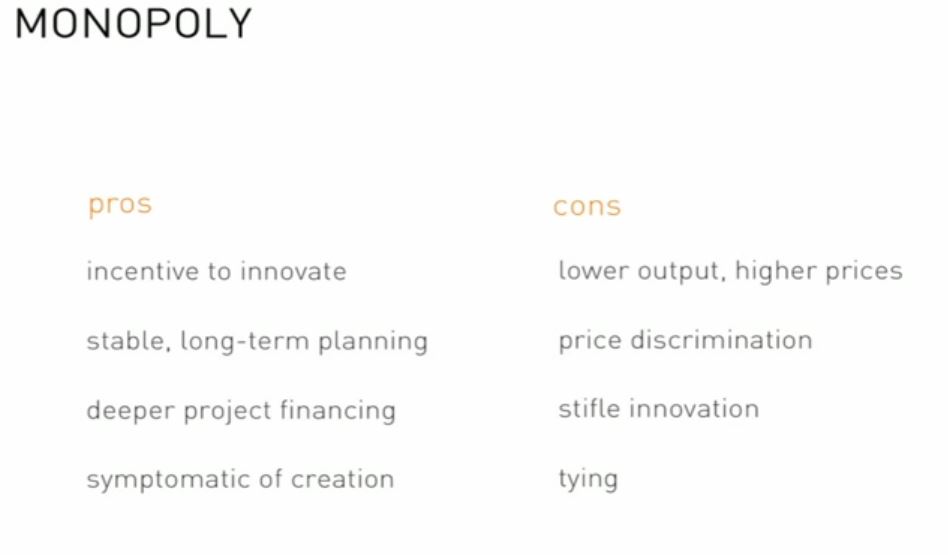 As I did not find his views about patents in his class, I tried to find something in his recent book, Zero to One. Here is what he says (pages 32-34): “So, a monopoly is good for everyone in the inside, but what about everyone in the outside? Do outsized profits come at the expense of the rest of society? Actually, yes […] and monopolies deserve their bad reputation – but only in a world where nothing changes. […] But the world we live in is dynamic: it’s possible to invent new and better things. Creative monopolies give customers more choices by adding entirely new categories of abundance to the world. Even the government knows this: that’s why one of its departments works hard to create monopolies – by grating patents to new inventions = even though another part hunts them down (by prosecuting antitrust cases). It’s possible to question whether anyone should really be awarded a legally enforceable monopoly simply for having been the first to think of something like a mobile software design, but… […] Monopolies drive progress because the promise of years or even decades of monopoly profits provides a powerful incentive to innovate. […] So why are economists obsessed with competition as an ideal state? It’s a relic of history.”

Maybe all this is BS, and unfortunately, I never read Jean Tirole. “He was awarded the Nobel Memorial Prize in Economic Sciences in 2014 for his analysis of market power and regulation of natural monopolies and oligopoly.” He would have much to say about this… maybe you can react and in the mean time, you can listen to Thiel’s full talk (see at the end).

In this talk, Peter Thiel has another interesting description about capturing value creation. “If you have a valuable company two things are true. Number one, that it creates “X” dollars of value for the world. Number two, that you capture “Y” percent of “X.” And the critical thing that I think people always miss in this sort of analysis is that “X” and “Y” are completely independent variables, and so “X” can be very big and “Y” can be very small. “X” can be an intermediate size and if “Y” is reasonably big, you can still have a very big business.” [HL comment: The “you” here may be the inventor or the entrepreneur, or the university at the origin of the idea…]

And then: “The thing that I think people always miss when they think about these things, is that because “X” and “Y” are independent variables, some of these things can be extremely valuable innovations, but the people who invent them, who come up with them, do not get rewarded for this. Certainly if you go back to you need to create X dollars in value and you capture Y percent of X, I would suggest that the history of science has generally been one where Y is zero percent across the board, the scientists never make any money. They’re always deluded into thinking that they live in a just universe that will reward them for their work and for their inventions. This is probably the fundamental delusion that scientists tend to suffer from in our society. Even in technology there are sort of many different areas of technology where there were great innovations that created tremendous value for society, but people did not actually capture much of the value. So I think there is a whole history of science and technology that can be told from the perspective of how much value was actually captured. Certainly there are entire sectors where people didn’t capture anything. You’re the smartest physicist of the twentieth century, you come up with special relativity, you come up with general relativity, you don’t get to be a billionaire, you don’t even get to be a millionaire. It just somehow doesn’t work that way. The railroads were incredibly valuable, they mostly just went bankrupt because there was too much competition. Wright brothers, you fly the first plane, you don’t make any money. So I think there is a structure to these industries that’s very important. I think the thing that’s actually rare are the success cases. So if you really think about the history in this and this two hundred fifty years sweep, why is almost always zero percent, it’s always zero in science, it’s almost always in technology. It’s very rare where people made money. You know in the late eighteenth, early nineteenth century, the first industrial revolution was the textile mills, you got the steam engine, you sort of automated things. You had these relentless improvements that people improved efficiency of textile factories, of manufacturing generally, at a clip of five to seven percent every year, year after year, decade after decade. You had sixty, seventy years of tremendous improvement from 1780 to 1850. Even in 1850, most of the wealth in Britain was still held by the landed aristocracy and the workers didn’t make that much. The capitalists didn’t make that much either, it was all competed away. There were hundreds of people running textile factories, it was an industry where the structure of the competition prevented people from making any money.”