I am reading Thiel‘s Zero to One. And after a compilation of his class notes last year, here are a few more comments. His book is as good as his notes but some readers may be puzzled. It’s not a book about how to build start-ups. (For this read Horowitz or Blank) “This book offers no formula for success. The paradox of teaching entrepreneurship is that such a formula necessarily cannot exist; because every innovation is new and unique, no authority can prescribe in concrete terms how to be innovative. Indeed, the single most powerful pattern I have noticed is that successful people find value in unexpected places, and they do this by thinking about business from first principles instead of formulas.” [Page 2] 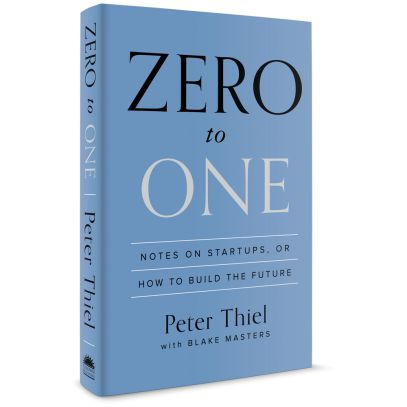 Thiel is a strong believer in exceptional achievements, in innovation just like in art or science. “The entrepreneurs who stuck with Silicon Valley learned four big lessons from the dot-com crash that still guide business thinking today:
1. Make incremental advances
2. Stay lean and flexible
3. Improve on the competition
4. Focus on products, not sales.
These lessons have become dogma in the startup world. (…) And yet the opposite principles are probably more correct:
1. It is better to risk boldness than trivaility
2. A bad plan is better than no plan
3. Competitive markets destroy profits
4. Sales matters just as much as product.“
[Pages 20-21]

There is one point where I disagree with Thiel. Though I tend to be convinced by his argument that monopoly is good and competition is bad – read Thiel with care for the subtlety of his arguments – I do not think he is right when he writes [page 33]: “Monopolies drive progress because the promise of years or even decades of monopoly profits provides a powerful incentive to innovate”. I prefer Levine and Boldrin. Now I do believe that established players are displaced by new players – not competitors – who innovate when the champions who have become dinosaurs stop being creative.

Thiel does not believe in luck. “You are not a lottery ticket” and I agree that you can minimize uncertainty by carefully planning and probably by adapting too. He still quotes [page 59] Buffett who considers himself “a member of the lucky sperm club and a winner of the ovarian lottery”. He also quotes Bezos with his “incredible planetary alignment” (which has not much to do with luck either). According to Thiel. success is never accidental.

I also like his piece about founders: “Bad decisions made early on – if you choose the wrong partners or hire the wrong people, for example – are very hard to correct after they are made. It may take a crisis on the order of bankruptcy before anybody will even try to correct them. As a founder your first job is to get the first things right, because you cannot build a great company on a flawed foundation. When you start something, the first and most crucial decision you make is whom to start it with. Choosing a co-founder is like getting married, and founder conflict is just as ugly as divorce. Optimism abounds at the start of every relationship. It’s unromantic to think soberly about what could go wrong, so people don’t. But if the founders develop irreconcilable differences, the company becomes the victim.” [page 108]

I will finish for now with sales: “In engineering a solution either works or fails. [Sales is different]. This strikes engineers as trivial if not fundamentally dishonest. They know they own jobs are hard so when they look at salespeople laughing on the phone with a customer or going to two-hour lunches, they suspect that no real work is being done. If anything, people overestimate the relative difficulty of science and engineering, because the challenges of those fields are obvious. What nerds miss is that it takes hard work to makes sales look easy. Sales is hidden. All salesmen are actors: their priority is persuasion, not sincerity. That’s why the word “salesman” can be a slur and the used car dealer is our archetype of shadiness. But we react negatively to awkward, obvious salesmen – that is, the bad ones. There’s a wide range of sales ability: there are many gradations between novices, experts and masters. […] Like acting, sales works best when hidden. This explains why almost everyone whose job involves distribution – whether they’re in sales, marketing, or advertising – has a job title that has nothing to do with those things: account executive, bus. dev, but also investment banker, politician. There’s a reason for these re-descriptions: none of us wants to be reminded when we’re being sold. […] The engineer’s grail is a product great enough that “it sells itself”. But anyone who would actually say this about a real product must be lying: either he’s delusional (lying to himself) or he’s selling something (and thereby contradicting himself). […] It’s better to think of distribution as something essential to the design of your product. If you’ve invented something new but you haven’t invented an effective way to sell it, you have a bad business – no matter how good the product.” [Pages 128-130] And if you do not like it said this way, watch HBO’s Silicon Valley episode 15… I may come with more comments when I am finished with this great book.