This is my latest contribution to Entreprise Romande. In the middle of my accounts of In the Plex, I think it is an interesting coincidence. React if you wish… 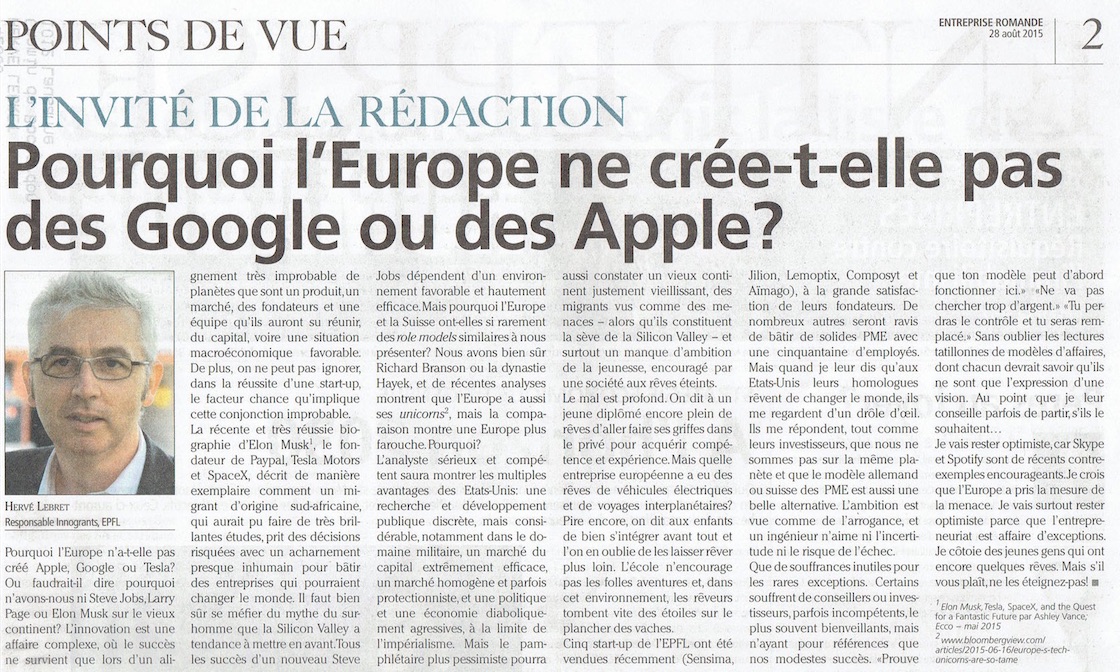 Why did not Europe create Apple, Google or Tesla? Or should we say, why don’t we have Steve Jobs, Larry Page and Elon Musk on the old continent? Innovation is complex and success comes only as an unlikely alignment of planets that are a product, a market, founders and a team they have managed to assemble, capital, and even a favorable macroeconomic situation. Also we cannot ignore in the success of a start-up, the luck factor involved in this unlikely combination.

The recent and great biography of Elon Musk [1], the founder of PayPal, Tesla Motors and SpaceX describes in an exemplary manner how a migrant from South African origin, who could have been a very brilliant student, took risky decisions with a nearly inhuman focus to build businesses that might change the world. We must of course be wary of the myth of the superman that Silicon Valley tends to highlight. All the success of the new Steve Jobs will depend upon a favorable and highly efficient environment. But why Europe and Switzerland create so rarely similar “role models”? We have of course Richard Branson or the Hayek dynasty and recent analyzes show that Europe has its “unicorns” [2] but the comparison shows a “shy” Europe. So why?

The serious and competent analyst will explain the multiple benefits of the United States: a discreet but substantial public R&D, particularly in the military field, a highly efficient capital market, a homogeneous and sometimes protectionist market, and a devilishly aggressive policy and economy at the limit of imperialism. But the pessimist pamphleteer may also see an aging (precisely) old continent where migrants are seen as a threat – whereas they are the lifeblood of Silicon Valley – and more seriously a lack of ambition of youth, encouraged by a society with dreams dying off.

The roots of our weakness are deep. We say to a young graduate still full of dreams to go and learn from the private sector to acquire skills and experience. But is there any European company with dreams of electric vehicles and interplanetary travel? Worse, we say to the children first and foremost to integrate well and we forget to let them dream further. The school does not encourage the crazy adventures and in this environment dreamers quickly fall from the stars on dry land.

Five EPFL start-ups have recently been sold (Sensima, Jilion, Lemoptix, Composyt and Aïmago) to the satisfaction of their founders and many others will be delighted to build strong SMEs with fifty employees or so. But when I tell them that in the United States their counterparts dream of changing the world, they look at me with a funny look. They tell me as their investors that we are not on the same planet and that the German and Swiss model of SMEs is a beautiful alternative. The ambition is seen as arrogance and an engineer does not like uncertainty or risk of failure.

So much unnecessary suffering for the rare exceptions. Some of them face advisors or investors, sometimes incompetent, mostly benign but having references only to our modest success. “Prove that your first model can work here.” “Do not go looking for too much money.” “You’ll lose control and you’ll be replaced.” Not to mention the finicky reading of business plan. Everyone should know that they are only the expression of a vision. To the point that I sometimes advise them to leave if they are ready to do so …

6 thoughts on “Why doesn’t Europe create any Google or Apple?”