“Anything that won’t sell, I don’t want to invent.” – Thomas Edison

This article arouse from a discussion with colleagues about what innovation really is. I have to admit the conversation helped me in clarifying and correcting a few misconceptions I had. So let me try to explain how the three concepts of Invention, Entrepreneurship and Innovation differ and how they are related. At least these are my views. 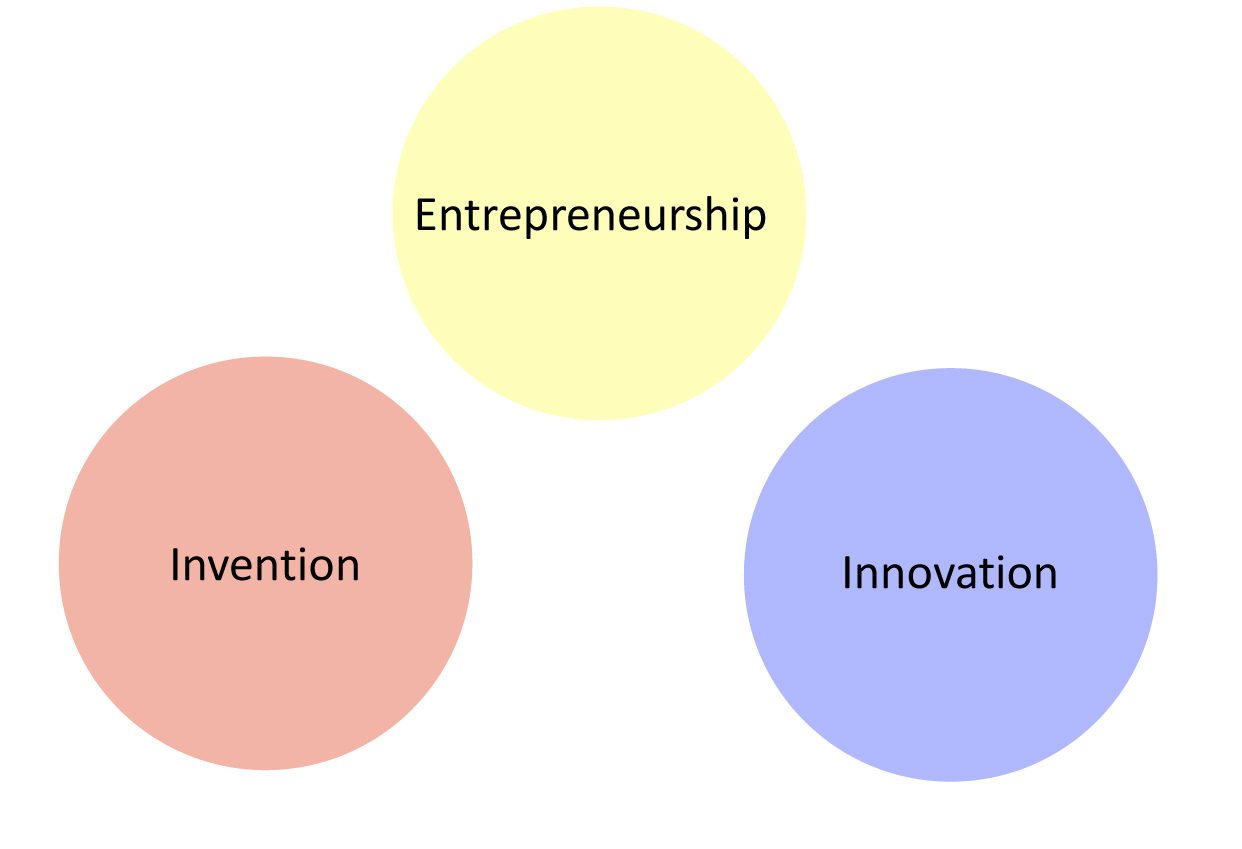 So let me begin with definitions:

Invention: something new, that did not exist previously and that is recognized as the product of some unique intuition or genius. A product of the imagination. Something that has never been made before. “Something new under the sun”. A discovery pre-exists the discoverer, by opposition to the inventor and her/his invention.

Innovation: the successful implementation and adoption by society of something new. So an innovation is the succesful commercialization or use (if non-profit) of an invention.

Entrepreneurship: it is the process of designing a new business (wikipedia). The entrepreneur perceives a (new) business opportunity and gathers the resources to implement it, ideally successfully. When the entrepreneur succeeds in implementing something new, (s)he is an innovator. But (s)he does not need to be an innovator, (s)he can also be an imitator.

My biggest mistake was to say “big companies do not innovate anymore”. I was wrong, Though most established companies imitate, many do innovate. They rarely invent and not many are entrepreneurial. But in order to innovate, it is better to be established. Let me clarify.

Let me come back to my favorite topic: “A start-up is an organization formed to search for a repeatable and scalable business model.” This is the best definition I have found so far and it comes from Steve Blank. This beautifully explains that all companies are not start-ups (for example when they have a clear business model from day one and/or if they do not try to scale). It also explains when a company is not a start-up anymore. Then it can innovate.

Another misconception is to confuse Research and Development (R&D) with innovation. Research deals with inventing or discovering. Development follows. Innovation comes afterwards. Patenting belong more to the invention side than to the innovation side of the equation. All this explains also why I have so many doubts about innovation metrics. They measure inputs (such as inventions or R&D) more than what innovation really is, an output. 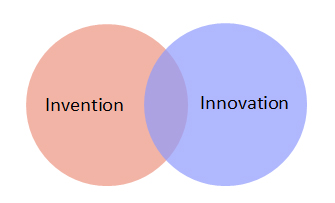 So how are these three concepts related? Read again, Edison’s quote above. In the past, large innovative firms such as IBM or Bell Labs were inventing. They had big R&D labs. Xerox was famous for its inventive capability and low innovation output. So Apple “stole” many of its inventions and innovated instead. Today, many established companies go to universities to find inventions they license. Or they collaborate with partners (i.e. “open innovation”). However, the risk and uncertainty linked to inventing as well as finding a market for new things makes innovation difficult without entrepreneurship… 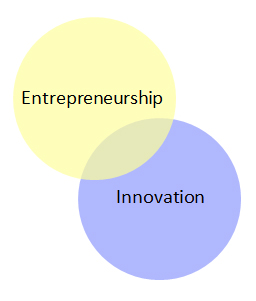 Entrepreneurship is a great way to enable innovation. Entrepreneurs see an opportunity and accept the uncertainty and risk taking. When it is done in-house. It is called intrapreneurship. Nespresso is one example (even if Nestle did not initially encourage its intrapreneur – who by the way was also the inventor). (Indeed because of the definition given above) corporations stop being start-ups when they innovate! Indeed they are often acquired (M&A) by big, established companies who know better how to commercialize – innovate. 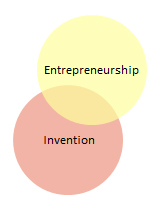 I had to add the intersection between invention and entrepreneurship. But does this make sense? I am not sure. There is however one industry which has combined both without a real need for innovation: the biotechnology industry is mostly an entrepreneurial activity which develops invention thanks to clinical trials. Biotechnology firms seldom innovate (Genentech and Amgen were exceptions – with a few other firms which managed to commercialize their molecules) because they are often acquired by large pharmaceutical firms or at best license their products to the bigger players. In fact many start-ups are in the same situation. But the truth is companies very seldom invent. Inventions occur before firms are established, at least in the high-tech field.

The following extract from Science Lessons: What the Business of Biotech Taught Me About Management, by Gorden Binder, former CEO of Amgen is interesting: 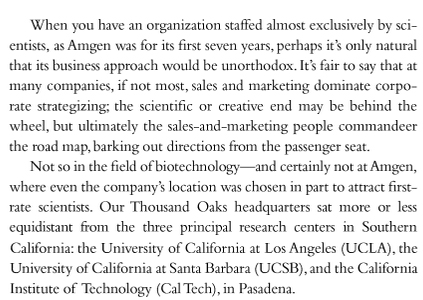 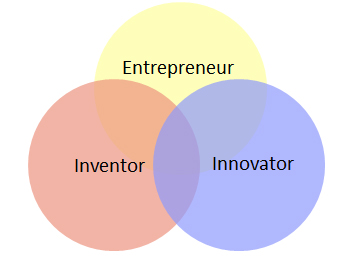 For the same reasons as explained above, individuals have seldom the three attributes. At Apple, Wozniak was an inventor. Jobs was an entrepreneur and an innovator. But Bill Gates or Larry Page and Sergey Brin, the Google founders, were rare cases of inventors, entrepreneurs and innovators combined. However Brin and Page invented at Stanford and then created Google to implement succesfully their invention.

So let me finish with a great definition of innovation given in How Google Works [page 206]: “To us, innovation entails both the production and implementation of novel and useful ideas. Since “novel” is often just a fancy synonym for “new”, we should also clarify that for something to be innovative, it needs to offer new functionality, but it also has to be surprising. If your customers are asking for it, you aren’t being innovative when you give them what they want; you are just being responsive. That’s a good thing, but it’s not innovative. Finally “useful” is a rather underwhelming adjective to describe that innovation hottie, so let’s add an adverb and make it radically useful, Voilà: For something to be innovative, it needs to be new, surprising, and radically useful.” […] “But Google also releases over five hundred improvements to its search every year. Is that innovative? Or incremental? They are new and surprising, for sure, but while each one of them, by itself is useful, it may be a stretch to call it radically useful. Put them all together, though, and they are. […] This more inclusive definition – innovation isn’t just about the really new, really big things – matters because it affords everyone the opportunity to innovate, rather than keeping it to the exclusive realm of these few people in that off-campus building [Google[x]] whose job is to innovate.”

Innovation is complex. Do I need to remind you of the challenges that Clayton Christensen – The Innovator’s Dilemma – Geoffrey Moore – Crossing the Chasm – or Steve Blank – The Four Steps to the Epiphany – have brilliantly described to explain why innovation remains somewhat magical… 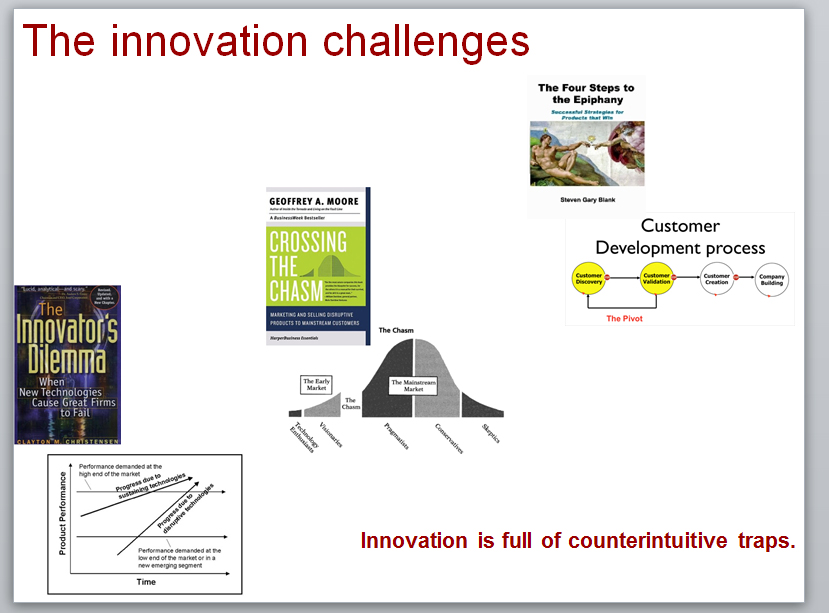 PS: can you be an entrepreneur without inventing and innovating? Sure! Not just small companies and craftmen who use their know-how for a decent living. You just need to imitate. Telecom operators such as Vodafone or Bouygues Telecom compete without a need to invent or innovate. They copy other telecom operators. (OK sometimes, they innovate, too). In the start-up world, the Samwer brothers have been famous for copy/paste American success stories and adapt them to the European market. You can find many references about this online and the clones they created include Alando (eBay), Zalando (Zappos, EasyTaxi (Uber), Pinspire (Pinterest), StudiVZ (Facebook), CityDeal (acquired by Groupon), Plinga (Zynga), and Wimdu (Airbnb). See also When Samwer was not Samwer yet but was writing a book – way before Rocket Internet and its clones.

2 thoughts on “Invention, Entrepreneurship and Innovation”