I regularly go back to my “second home” trying to discover if Silicon Valley has to tell us anything new. This time, I came back a little more confused than after my previous journeys. The region remains the center of entrepreneurship and high-tech innovation, but it seems to touch the limits of madness. Everything goes too fast (except the automobile traffic which is nearly always congested), everything is too expensive, and many are hoping for a crisis to return to a normal situation. Certainly the craziest projects are funded and it is difficult to say what they will become (SpaceX and Tesla of course, but what about MagicLeap or explorations of Google and others in artificial intelligence and augmented human?)

But connoisseurs of Silicon Valley are worried too. So is Michael Malone in Of Microchips and Men: A Conversation About Intel, published in the New Yorker for his new book The Intel Trinity: “The most interesting phenomenon of the last three or four years is that big, successful Valley companies like Facebook and Google and Apple are so flush with cash that the game is now, you build yourself to a certain size and look to be bought. Look at Mark Zuckerberg. He buys Instagram and then he buys WhatsApp. He spends nineteen billion dollars for WhatsApp. That’s a mind-boggling number for a startup. For the first time, acquisitions are more appealing than I.P.O.s. So we are going into this interesting era where maybe companies will choose not to go public anymore, which was always the big-money exit strategy, and instead go do a fan dance in front of Mark Zuckerberg in hopes of getting these insane valuations. What’s your take on the worldly ambitions of the new tech companies? I’m a little bothered by the hypocrisy exhibited by the new generation of Silicon Valley leaders. They’re code writers, and software is different from hardware. With software people, there is this big, romantic philosophy—“Do no evil”—yet it’s always combined with a sort of duplicity. These guys who are running the social-networking era, they’re really behaving like oligarchs: “You know the reason we’re successful is that we’re special. We’re smarter than other people.” You didn’t see that in the early generation of Silicon Valley leaders. They were the children of blue-collar working families. They worked with their hands. So they didn’t try to be your whole world. They didn’t build a campus for you to live on twenty-four hours a day, like in a dorm. They expected you to go home to your family. They had an admiration for working people. You just don’t see that right now with the social-networking guys. Average folks in the Valley, especially poor people, have a really strong sense that these guys don’t care about them. And I think it manifests itself in all sorts of ways, like working with the N.S.A., and the perpetual effort to monetize our private information. It’s a very different world.” 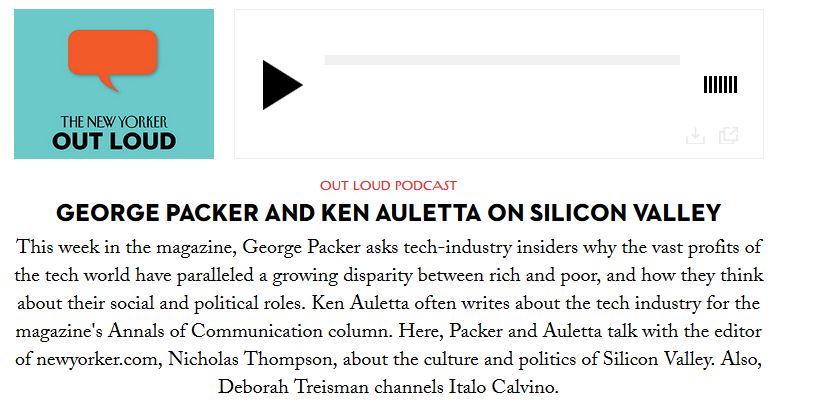 At the anecdote level, I retained the following from my trip:
– Venture capital is changing due to the departure of former generations and they no longer fund the traditional areas of the semiconductor or hardware, too risky at the product level, nor even the cleantech / greentech (which were not just another bubble). Only corporations fund innovation in these sectors,
– Accelerators are primarily a source of new projects and talents for investors, not necessarily a better model for entrepreneurs,
– Entrepreneurs are stressed by costs and competition that leads to overbidding,
– As a result, the region is saturated, also because its center of gravity moved to San Francisco
– Therefore my belief (still strong) that we need to know the dynamics of this region to innovate and engage in high-tech is modulated by all these constraints and there is probably an opportunity to attract talent, projects and small and large high-tech companies in Europe …

So will there be a lot of damage as predicted by the Guardian in Silicon Valley braces it self for a fall ‘There’ll be a lot of blood.’? Or do we make the same mistake as AnnaLee Saexnian: “In 1979, I was a graduate student at Berkeley and I was one of the first scholars to study Silicon Valley. I culminated my master’s program by writing a thesis in which I confidently predicted that Silicon Valley would stop growing. I argued that housing and labor were too expensive and the roads were too congested, and while corporate headquarters and research might remain, I was convinced that the region had reached its physical limits and that innovation and job growth would occur elsewhere during the 1980s. As it turns out I was wrong.” (Source: A climate for Entrepreneurship – 1999)

PS: a shot addition (dated February 12, 2016) about the craziness of unicorns. Just have a look at the nice infographics below…