Very interesting article in the very good ParisTech Review: The Rise and Fall of BlackBerry. The article shows how disruption is more and more threatening not only for established companies but also fast growing start-ups.

Blackberry was founded in 1984 as Research in Motion by two young engineering students from the University of Waterloo – Mike Lazaridis – and the University of Windsor – Douglas Fregin. They were about 23 years-old. Eight years later, an experienced business man, James Balsillie, would join, invest some of his money ($250k) and become Co-CEO with Lazaridis. RIM funded a lot of its initial activity with partners (Ontario New Ventures – $15k; General Motors – $600k, Ericsson, – $300k, University of Waterloo – $100k, Ontario local development – $300k) so that it raised investor money in 1995 only, including Intel in 1997. The company went public on the Toronto Stock Exchange in October 1997 and then on Nasdaq in 1999.

As the authors notice, “though BlackBerry has less than 1% of the smartphone market share today, it once had more than 50%. […] In this era of disruption, the mother of disruption stories is the BlackBerry story. A company that introduced the BlackBerry in 1998 became a $20 billion company from nothing in less than a decade. Then four or five years later, it was back down to a $3 billion company, gasping for breath. It’s not only a disruption story; it is a story of the speed of the technology race today.”

They explain how Lazaridis was a visionary when mobile phones had to be simple devices and how he failed a few years later: “The pivotal moment is January 2007 when Steve Jobs walks onto the stage in San Francisco and holds up that shiny glass object that we all [now] know and love so much, and says, “This is an iPhone.” […] The really compelling part of the BlackBerry story is how they reacted that day. Over in Mountain View, California, you had the folks at Google under a secret project. One was for a new keyboard phone and the other was for a touch screen phone that was going to be run on Android. The minute they watched that live, streaming on the internet, they realized that their project keyboard was dead, and they immediately shifted everything to the touch screen phone…. Mike Lazaridis looked at this announcement, looked at what Steve Jobs was offering, and said, “This is an impossibility.” Again, the conservative engineer brought up on conservation said, “The networks won’t be able to carry this. It’s an impossibility. It’s illogical that anyone would even propose this.” He was right for the first two years. Remember all the dropped calls, all the frustrations, all the lawsuits against Apple and the carriers. It didn’t work…. But then it did, and RIM got it wrong. Two years is a lifetime at a technology rate, and by the time they realized what a serious threat it was, they were at that point followers.”

Blackberry was (still is) the success story of the University of Waterloo and Wikipedia mentions how much Lazaridis has given back to his alma mater: in 2000, Lazaridis founded the Perimeter Institute for Theoretical Physics. He has donated more than $170 million to the institute. In 2002, Lazaridis founded the Institute for Quantum Computing (IQC) at the University of Waterloo. He, with wife Ophelia, has donated more than $100 million to IQC since 2002. This looks very similar to what Logitech and Daniel Borel are to EPFL (where I work). You should read the full article and I conclude here with my usual cap. table… 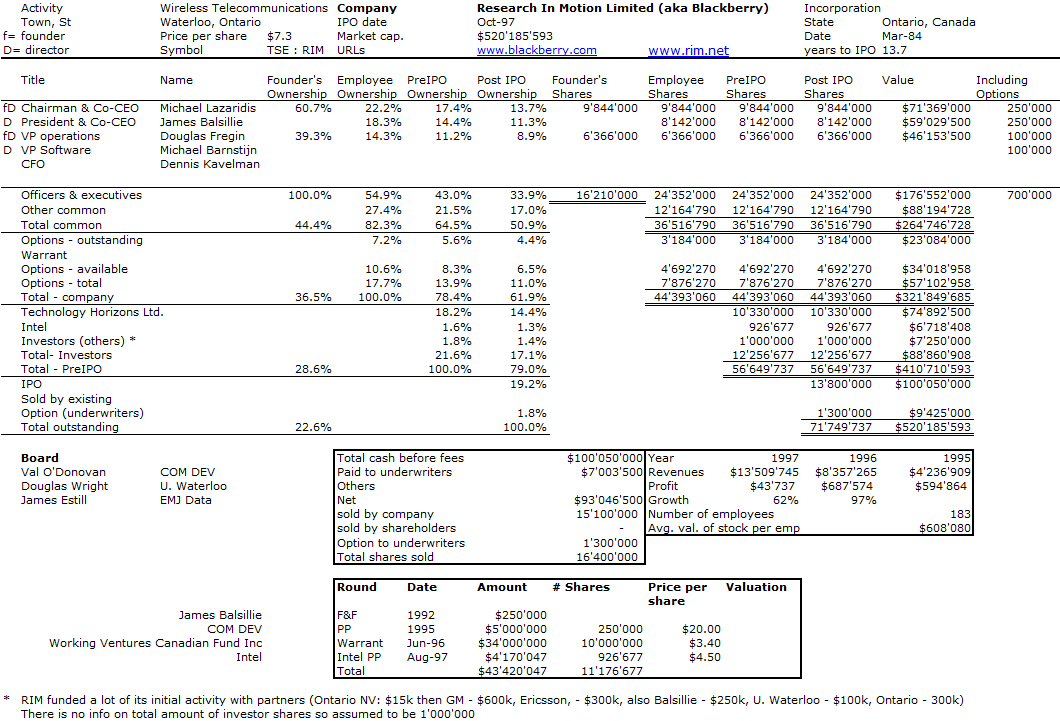