When I read that Nassim Nicholas Taleb said this is “one of the most important management books of all time”, I was intrigued. Usually I do not like general business books. But here, not only is it a great book, but fun to read!

What is the halo effect? A tendency to make inferences about specific traits on the basis of a general impression [Page 50]. 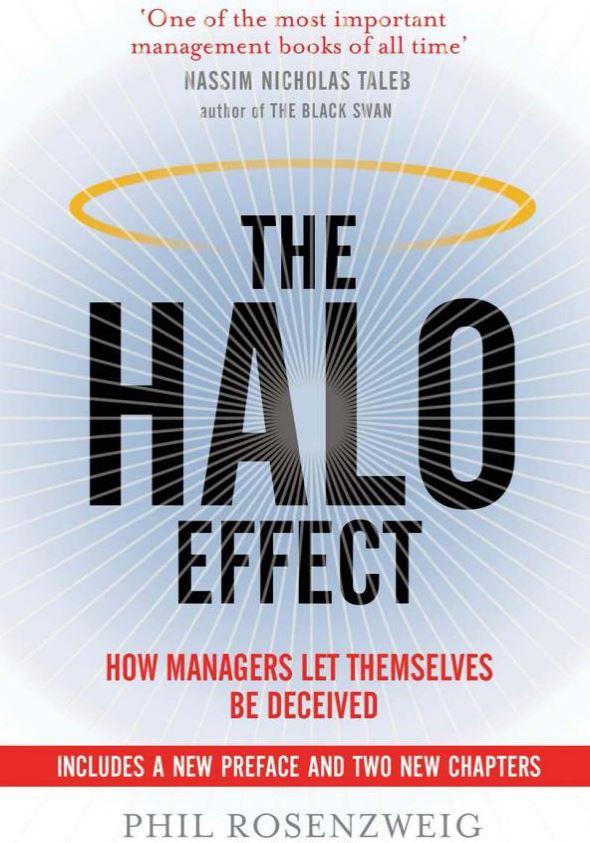 The author has a major question: Is management a science? Pages 12-17 cover that sensitive topic: “In other fields, from medicine to chemistry to aeronautical engineering, knowledge seems to march ahead relentlessly. What do these fields have in common? In a word, these fields move forward thanks to a form of inquiry we call science. Richard Feynman once defined science as “a method for trying to answer questions which can be put into the form: If I do this, what will happen?” Science isn’t about beauty or truth or justice or wisdom or ethics. It’s eminently practical. It asks, If I do something over here, what will happen over there? If I apply this much force, or that much heat, or if I mix these chemicals, what will happen? By this definition, What leads to sustained profitable growth? is a scientific question. It asks, If a company does this or that, what will happen to its revenues or profits or share price?” [Page 12]

“Our inability to capture the full complexity of the business world through scientific experiments has provided fodder for some critics of business schools. Management gurus Warren Bennis and James O’Toole, in 2005 Harvard Business Review article, criticized business schools for their reliance on the scientific method. They wrote: “This scientific model is predicated on the faulty assumption that business is an academic discipline like chemistry or geology when, in fact, business is a profession and business schools are professional schools – or should be”. The notion seems to be that since business will never be understood with the precision of the natural sciences, it’s best understood as a sort of humanity, a realm where the logic of scientific inquiry doesn’t apply. Well, yes and no.” [Page 14]

Rozenzweig concludes this 1st chapter with a beautiful story (page 16), again from Richard Feynman: In the South Seas, there is a cult of people. During the war they saw airplanes land with lots of materials, and they want the same thing to happen now. So they’ve arranged to make things like runways, to put fires along the sides of the runways, to make a wooden hut for a man to sit in, with two wooden pieces on his head like headphones and bars of bamboo sticking out like antennas – he’s the controller. And they wait for the airplanes to land. They’re doing everything right. The form is perfect. But it doesn’t work. No airplanes land. So I call these things Cargo Cult Science, because they follow all the apparent precepts and forms of scientific investigation, but they’re missing something essential, because the planes don’t land. He called that last section Science, Pseudoscience and Coconut Headsets.

His criticism in chapter 6 of famous bestsellers In Search of Excellence by Peters and Waterman [page 83] and then of Built to Last by Collins and Porras [page 94] are particularly striking. Stories and science are different and the author explains many delusions created by approximate science:
#1: The Hallo Effect
#2: The delusion of Correlation and Causality
#3: The Delusion of Single Explanations
#4: The Delusion of Connecting the Winning Dots
#5: The Delusion of Rigorous Research
#6: The Delusion of Lasting Success
#7: The Delusion of Absolute Performance
#8: The Delusion of the Wrong End of the Stick
#9: The Delusion of Organizational Physics.
(if you are too lazy to read this great book, have at least a look at https://en.wikipedia.org/wiki/The_Halo_Effect_(business_book))

Rosenzweig tries to explain the complexity of measuring company performance. What are the key elements that managers should take into account for excellence? And Rosenzweig shows that storytelling has been as important as research in that quest. He further claims that authors of bestsellers such as In Search of Excellence, Built to Last or From Good to Great who claim their results were based on research, indeed were more excellent story tellers than rigorous researchers.
“It’s not that the important elements are not right. In Search of Excellence gives eight best practice: a bias for action; staying close to the customer; autonomy and entrepreneurship; productivity through people; hands-on, value-driven; stick to the knitting; simple form, lean staff; and simultaneous loose-tight properties.” [Page 85]

“Whereas in Built to Last, Collins and Porras give their 5 timeless principles: having a strong core ideology; building a strong corporate culture; setting audacious goals; developing and promoting people; creating a spirit of experimentation and risk-taking; driving for excellence”. [Page 96]

“Several researchers have studied the rate at which company performance changes over time. Pankaj Ghemawat at Harvard Business School examined the return on investments (ROI) of a sample of 692 American companies over a ten-year period from 1971 to 1980. He put together one group of top performers, with an average ROI of 39 percent, and one group of low performers, with an average ROI of just 3 percent. Then he tracked the two groups over time. What would happen to their ROIS? Would the gap persist, would it grow, or would it diminish? After nine years, both groups converged together toward the middle, the top performers falling from 39 percent to 21 percent and the low performers rising from 3 percent to 18 percent.” [Page 104]

“These studies, and others like them, all point to the basic nature of competition in a market economy. Competitive advantage is hard to sustain. Sure, if you want to, you can look back over seventy years of business history and pick out a handful of companies that have endured, but that’s selection based on outcomes.” [Page 105]

“Interviews with managers, asking them to look back over the ten-year period and recount their experiences (…) these sort of retrospective interviews are likely to be full of halos, as people take cues from performance and make attributions accordingly.” [Page 108]

Again Rosenzwieg has nothing against interviews, he just warns the reader that they have to be meticulously prepared to avoid any bias and answers based on outcomes.
“Another famous study, the Evergreen project, identified eight practices: strategy; execution; culture; structure; talent; leadership; innovation; and mergers and partnerships (Page 110). Yet once we see that performance is relative, it becomes obvious that companies can never achieve success simply by following a given set of steps, no matter how well intended; their success will always be affected by what rivals do” [Page 116].

“Perhaps the most interesting factor in Big Winners and Big Losers is mentioned as a brief aside but not examined closely: Marcus points out that large companies show up more frequently among the Big Losers, while almost all the Big Winners are small or midsize companies. This observation ought to spark one’s curiosity, because large companies got that way in the first place by doing things well – they didn’t grow by being Losers – yet something seemed to prevent them from maintaining that high performance. Extremer performance, for better and for worse, is more common among small companies”. [Page 132]

But a 10 percent difference in performance doesn’t say anything about what will happen at my company – the impact could be more or less or nothing at all. There’s no guarantee, no promise that inspires me to take action. Books, which provide simple and definitive advice and studies of organizational performance, stand in two very different worlds. The first world speaks to practicing managers and rewards speculations about how to improve performance. The second world demands and rewards adherence to rigorous standards of scholarship. Here science is paramount, storytelling less so. The result is a schizophrenic tour de force in which the demands of the roles of the consultant and teacher are disassociated form the demands of the researcher”. [Page 135]

“According to the Economist, Tom Peters can charge corporate clients up to $85,000 for a single appearance, and Jim Collins commands a fee of $150,000. There’s a lucrative market for spinning stories of corporate success. Will anyone hire (a researcher) at $85,000 or $150,000 a pop to talk about a statistically significant 4 percent difference in performance? Somehow it seems doubtful [page 136].

But both are full of uncertainties: “Strategy always involves risk because we don’t know for sure how our choices will turn out. […] A first reason has to do with customers. […] Sam Philips, the legendary Sun records producer, once cautioned, “Anytime we think you know what the public’s going to want that’s when you know you’re looking at a damn fool when you’re looking in the mirror”. Market reaction is always uncertain, and smart strategists know it. [Page 146]

“A second source of risk has to do with competitors. […] An entire branch of economics, game theory, has grown up around a simple form of competitive intelligence. […] A third source of risk comes from technological change. […] In his groundbreaking research Clayton Christensens at Harvard Business School showed that in a wide range of industries, from earth-moving equipment to disk drives to steel, successful companies were repeatedly dislodged by new technologies. [Page 147]

Jim Collins expressed surprised that [his] eleven Great companies came from ordinary, unspectacular industries. […] I suspect a different interpretation. These industries can be described as dowdy, but a better word might be stable. They were less subject to radical changes in technology, were less susceptible to shifts in customer demand, and may have had less intense competition. [Page 147]

As James March of Stanford and Zur Shapira of New York University explained, “Posthoc reconstruction permits history to be told in such a way that “chance”, either in the sense of genuinely probabilistic phenomena or in the senses of unexplained variation, is minimized as an explanation.” But chance does play a role, and the difference between a brilliant visionary and a foolish gambler is usually inferred after the fact, an attribution based on outcomes. [Page 150]

There are fewer unknowns […], yet execution still involves a number of uncertainties. [Page 151] And that brings us to the best answer I can provide to the question, What leads to high performance? If we set the usual suspects of leadership and culture and focus and so on – which are perhaps causes of performance – we’re left with two broad categories: strategic choice and execution. The former is inherently risky since it’s based on our best guesses about customers, about competitors, and technology, as well as about our internal capabilities. The latter is uncertain because best practices that work well on one company may not have the same effect in another. […] Wise managers know that business is about finding ways to improve the odds of success – but never imagine that success is certain. If a company makes strategic choices which are shrewd, works hard to operate effectively, and is favored by Lady Luck, it may put some distance between itself and its rivals, at least for a time. But even those profits will tend to erode over time. [Page 156]

The answer to the question what really works? is simple: Nothing really works. At least not all the time. […] So what can be done? A first step is to set aside the delusions that color so much of our thinking about business performance. To accept that few companies achieve lasting success. To admit that the margin between success and failure is often very narrow, and never quite as distinct or as enduring as it appears at a distance. And finally, to acknowledge that luck often plays a role in company success. [Page 158]

Rosenzweig finishes his book with examples of bold decisions from leaders at Goldman Sachs, Intel, BP, Logitech. Entrepreneurship inherently involves risks, but not doing anything would be much riskier.