I wrote here how much I enjoyed reading Sapiens. Harari’s new book, Homo Deus: A Brief History of Tomorrow, is just as good. 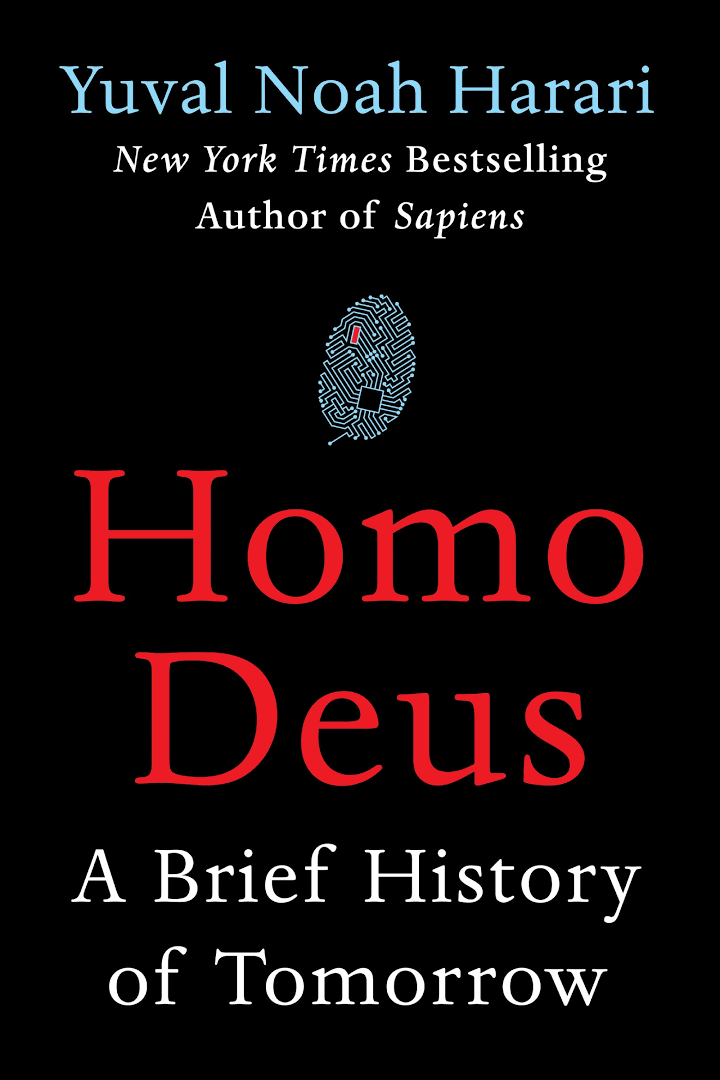 In Death Is Optional, the exchange between Daniel Kahneman and the author, which summarizes many of Harari’s most original ideas, here is one of the most interesting ones – in relationship to start-ups: “in terms of history, the events in Middle East, of ISIS and all of that, is just a speed bump on history’s highway. The Middle East is not very important. Silicon Valley is much more important. It’s the world of the 21st century … I’m not speaking only about technology.” One may not like it, but it is interesting.

As usual, a few extracts:
“Most studies cite tool production and intelligence as particulararly important for the ascent of humankind. […] Humans nowadays completely dominate the planet not because the individual human is far smarter and more nimble-fingered than the individual chimp or wolf, but because Homo Sapiens is the only species on earth capable of co-operating flexibly in large numbers.” [Pages 130-1]

“Animals such as wolves and chimpanzees live in a dual reality. On the one hand, they are familiar with objective entities outside them, such as trees, rocks and rivers. On the other hand, they are aware of subjective experiences within them, such as fear, joy and desire. Sapiens, in contrast, live in triple-layered reality. In addition to trees, rivers, fears and desires, the Sapiens world also contains stories about money, gods, nations and corporations. As history unfolded, the impact of gods, nations and corporations grew at the expense of rivers, fears and desires. There are still many rivers in the world, and people are still motivated by their fears and wishes, but Jesus Christ, the French Republic and Apple Inc. have dammed and harnessed the rivers, and have learned to shape our deepest anxieties and yearnings.” [Page 156]

If we invest money in research, then scientific breakthroughs will accelerate technological progress. New technologies will fuel economic growth, and a growing economy could dedicate even more money to research. With each passing decade we will enjoy more food, faster vehicles and better medicines. One day our knowledge will be so vast and our technology so advanced that we could distill the elixir of eternal youth, the elixir of true happiness, and any other drug we might possibly desire – and no god will stop us. […] Modern life consists of a constant pursuit of power within a universe devoid of meaning. [Page 201]

Humanist revolution according to Harari [Pages 232-3]

Harari is sometimes too long in the development of his ideas, but it is worth following him. On pages 247-76, he explains how humanism is not a coherent view of the world. Three schisms have occurred: liberalism (where liberty is the most important value), socialism (where equality is first) and evolutionary humanism (where conflict is the raw material pushing evolution forward).

“By 1970 the world contained 130 independent countries, but only thirty of these were liberal. […] And then everything changed. The supermarket proved to be far stronger than the gulag. […] As of 2016, there is no serious alternative to the liberal package. […] China is the most promising ground for the new techno-religions emerging from Silicon Valley. […] God is dead. […] Religions that lose touch with the technological realities of the day lose their ability even to understand the questions being asked.” [Pages 264-8]

“Numbers alone don’t count for much in history. History is often shaped by small groups of forward-looking innovators. […] In 1881, Muhammad Ahmad bin Abdallah, […] meanwhile in 1875, Dayananda Saraswati in India, […] Pope Pius IX, in Europe […] or thirty years before, Hong Xiuquan […] Hundreds of millions clung to their religious dogmas. […] Hong led the deadliest war of the nineteenth century, the Taiping Rebellion. From 1850 to 1864, at least 20 million people lost their lives.” [Pages 270-1]

“Most societies failed to understand what was happening, and they therefore missed the train of progress”. [Page 273] Ask yourself what was the most influential discovery, invention or creation of the twentieth century? That’s a difficult question […] antibiotics, […] computers, […] feminism. […] What did religions bring? This is a difficult question too because there is so little to choose from. [Page 275]

And as a conclusion of chapter 7: “Since humanism has long sanctified the life, the emotions and the desires of human beings, it’s hardly surprising that a humanist civilisation will want to maximize human lifespans, human happiness and human power.” [Page 277]