While reading Hammer And Tickle: A History Of Communism Told Through Communist Jokes by Ben Lewis, I began to wonder why a colleague would offer me such a book. Because I would be a stalinist? Because on the contrary, I should be careful about being too critical? Or more simply because big institutions would always have a tendency to become bureaucracies. Well i do not know and it does not matter as much as the fact I enjoyed reading these jokes despite the terrible background which explains their existence… 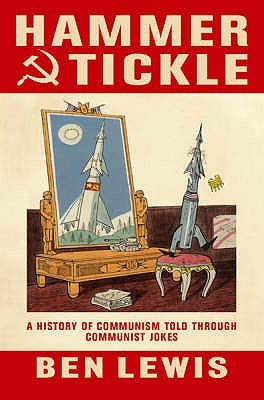 In a similar style, I would also encourage you to watch Une exécution ordinaire (in French) [see the IMDB link here], a beautiful and terrible movie. Here is the trailer.

The jokes mentioned below from the book might push you to read more.

What is colder in Romania than the cold water? The hot water. [Page 3]

‘There was another joke that was almost true – true to life. Ceaușescu is very angry because he is not hearing any jokes about him. So he orders a huge mass meeting, and announces, ‘from now on you are going to work without pay.’ And nobody says anything. ‘Okay,’ he continues, ‘and from now on you are all going to work for me.’ Nobody says anything. ‘Tomorrow everybody is condemned to death by hanging,’ he adds. Nobody says anything. ‘hey,’ he says ‘are you crazy? Don’t people have anything to say? Aren’t you going to protest?’ there’s is only one tiny guy who says, ‘Mr President, I have a question: do we bring our own rope or is the trade union going to give it to us?’ [Page 3 again]

Anti-Semitism is unfortunately never very far, but as the Jews themselves are often the authors … I allow myself to quote two:

A Jew talking to his friend: ‘My son Moses and I are doing very fine. Moisha works in the Comintern as a black African Communist, while I sit in the Kremlin, at the top of Ivan the Great Bell Tower, waiting to ring the bell for the World Revolution.
‘Well it must be a rather dull job to wait for the World Revolution,’ his friend says.
‘Oh yes, but it is a job for life.’
[Page 27]

A stagecoach full of passengers is travelling from Zhitomir to Kiev when a band of robbers attacks. Their leader commands, ‘Halt. Nobody move. Hands up!’ All the passengers obediently climb out of the stagecoach and put their hands up. One of them turns to the bandits’ leader and says, ‘Mr Chief, you’re gonna take everything from us in a couple of minutes. Let me go into my pocket with one hand for a moment. I have to give something to the guy standing next to me.’
‘Hurry it up!’ he points the barrel of his revolver at the traveller.
The passenger goes into his back pocket, takes out one hundred roubles and, turning to his neighbour, says, ‘Solomon! Didn’t I owe you a hundred roubles? Here, take it. And keep in mind that we’re even now.’
[Page 29]

A classic: What were Mayakovsky’ last words before he committed suicide? ‘Comrades, don’t shoot!’ [Page 50]

Humour in Absurdistan: A flock of sheep are stopped by frontier guards at the Russo-Finnish border. ‘Why do you wish to leave Russia?’ the guards ask them.
‘It’s the NKVD,’ reply the terrified sheep. ‘Beria’s ordered them to arrest all elephants.’
‘But you aren’t elephants!’ the guards point out.
‘Try telling that to the NKVD!’
[page 58]

A teacher asks his class ‘Who is your mother and who is your father?’
A pupil replies: ‘My mother is Russia and my father is Stalin.’
‘Very good,’ says the teacher. ‘And what would you like to be when you grow up?’
‘An orphan’
[Page 89]

One housewife to another: ‘I hear there’ll be snow tomorrow!’
‘Well I’m not queuing for that.’ [Page 132]

Why is it not possible to control the birth rate in Soviet Bloc countries?
Because the means of production remain in private hands. [Page 145]

Is Marxism-Leninism a science?
No. If it was, they would have tested it on animals first. [Page 145]

Khrutshchev is walking through the Kremlin, getting worked up about the Soviet Union’s problems, and spits on the carpet in a gesture of disgust.
‘Behave yourself, Nikita Sergeyevich,’ admonishes his aide. ‘remember that the great Lenin walked through these halls!’
‘Shut up’, responds Khrushchev. ‘I can spit all I like here; the Queen of England gave me permission!’
‘The Queen of England?’
‘Yes! I spat on her carpet in Buckingham Palace too, and hes said, “Mr Khrushchev, you can do that in the Kremlin if you wish, but you can’t behave like this here…”‘ [Page 154]

Why do Vopos always travel in three?
One who can read, one who can write, and one to keep his eye on these two intellectuals. [Page 158]

‘Hmm’, he says opening the letter, ‘he told me if things were going badly out there, he’d write to me in red ink.’ The letter is in blue ink. He reads it: ‘Dear Ivan, I am having a wonderful time in Kazakhstan. The weather is warm, I have a big apartment and plenty to eat…’
He interrupts the letter, turns to his son and says ‘you see, we are progressing along the road to Socialism…’ The he reads the last line of the letter: ‘There is only on e problem – I can’t find any red ink.’ [Page 164]