Following a recent post about critics of technosciences and a much older one about the failed promises of science, here is a very short post about a (very good) book written in French and not (yet) translated in English: Homme augmenté, humanité diminuéeD’Alzheimer au transhumanisme, la science au service d’une idéologie hégémonique mercantile (Augmented humans, diminished humankind – From Alzheimer’s to transhumanism, science serving a mercantile and hegemonic ideology.) 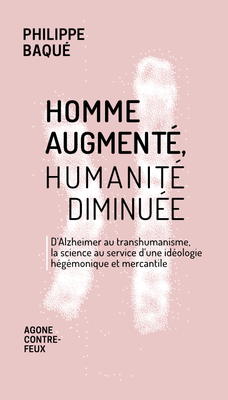 The author begins with his personal story, how his mother suffered and died from this terrible Alzheimer’s disease. Then he began to inquire about it and his doubts began to grow. We do not have to agree with everything author Philippe Baqué says, but we cannot avoid having the same doubts about where and how science and innovation drive us all. I hope these three short extracts will create the same reaction I felt:

[Page 74] I reached the conlusion that patients are demented mostly because they were dying of fear, at the idea of death. The brains of Alzheimer’s patients might be altered, but these patients are mostly sick of fear.

[Page 260] I feel the need to ask the question again: what is transhumanism? An economic and political lobby? A technoreligion? A new eugenic ideology? The biggest science fraud of the 21st century?

Worth thinking about it… Is aging a disease? Is death a disease?