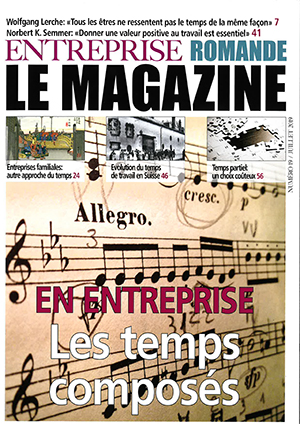 If you are not a subscriber, here is a copy. 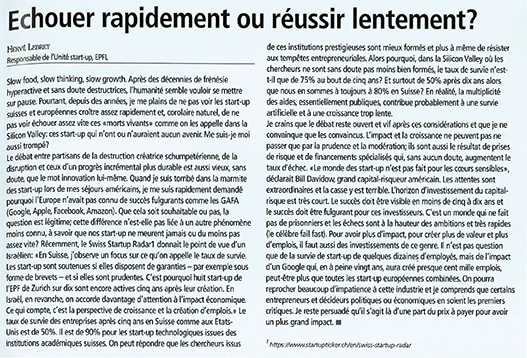 Slow food, slow thinking, slow growth. After decades of hyperactive and probably destructive frenziness, humankind seems to want a pause. Yet for years I have been complaining that I do not see the Swiss and European startups growing fast enough and, natural corollary, I do not see failing fast enough these “living dead” as they are called in Silicon Valley, these startups that have or would have no future. So was I wrong too?

The debate between the supporters of Schumpeter’s creative destruction, “disruption” and those of a more sustainable incremental progress is as old as the word innovation itself. When I fell into the pot of startups during my American journeys, I quickly wondered why Europe had not experienced such spectacular success such as the GAFAs (Google, Apple, Facebook, Amazon). Whether it is desirable or not, the question is valid: is this difference not related to another less known phenomenon, namely that our startups never die or at least not fast enough?

Recently, the Swiss Startup Radar [1] gave the point of view of an Israeli: “In Switzerland, I observe a strong focus on the survival rate. Startups are encouraged if they have collateral, such as patents, and take a cautious course. As a result, eight out of 10 startups from ETH Zurich are still active five years after their foundation. In Israel, on the other hand, more attention is paid to the economic impact. What matters when assessing a project is the prospect of growth and the creation of new jobs.” The survival rate of companies after 5 years in Switzerland as in the USA is 50%. It is 90% for technology startups from Swiss academic institutions. It can be argued that researchers from these prestigious institutions are better trained and better able to withstand entrepreneurial storms. So why in Silicon Valley where researchers are probably no less well trained, the survival rate is only 75% after five years. And especially less than 50% after 10 years while we are still 80% in Switzerland? In fact, the multiplicity of support, mainly public, probably contributes to artificial survival and slow growth.

I fear that the debate will remain open and lively after this chronicle and only convince the already convinced. Impact and growth cannot only happen through cautiousness and moderation; they are also the result of risk taking and specialized financing which undoubtedly increase the failure rate: “Being an entrepreneur is not for the faint of heart” declared Bill Davidow, a famous American venture capitalist, the expectations are extraordinary and fatality is terrible. The investment horizon for venture capital is very short. Success must be visible in less than five to ten years and the success must be dazzling for these investors. It is a world that does not make any prisoner and failures are up to the ambitions, and worse, very fast (the famous “fail fast”). To have more impact, to create more capital value and also more jobs, it also requires investments of this kind. There is no question of the survival of startups of a few dozen employees, but the impact of a Google that in just twenty years will have created nearly 100,000 jobs, perhaps more than all European startups combined. We can criticize this industry for being very impatient and I understand that some entrepreneurs and political or economic decision makers are the first critics. I remain convinced that this is part of the price to pay for this larger impact.