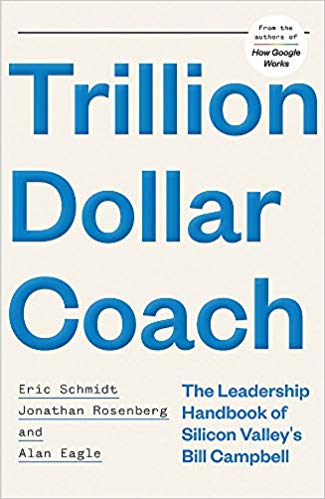 Eric Schmidt and its coauthors emphasize the importance of teams, of people and of products. For example:

“In our previous book, How Google Works, we argue that there is a new breed of employee, the smart creative, who is critical to achieving this speed and innovation. The smart creative is someone who combines technical depth with business savvy and creative flair. […] As we were researching this book and talking to the dozens of people Bill had coached in his career, we realized that this thesis misses an important piece of the business success puzzle. There is another , equally critical, factor for success in companies: teams that act as communities. integrating interests and putting aside differences to be individually and collectively obsessed with what’s good for the company. […] But adhering to these principles is hard, and it gets even harder when you add factors such as fast-moving industries, complex business models, technology-driven shifts, smart competitors, sky-high customer expectations, global expansion, demanding teammates… […] To balance the tension and mold a team into a community, you need a coach, someone who works not only with individuals but also with the team.” [Pages 22-4]

“Bill started his business career as an advertising and marketing guy, then added sales to his portfolio after joining Apple. But through his experiences in the tech world, in his stints at Apple, Intuit, Google, and others, Bill came to appreciate the preeminence of technology and product in the business pecking order. “The purpose of a company is to take the vision you have of the product and bring it to life,” he said once at a conference. “Then you put all the other components around it – finance, sales, marketing – to get the product out the door and make sure it’s successful.” This was not the way things were done in Silicon Valley, or most other places, when Bill came to town in the 1980s. The model then was that while a company might be started by a technologist, pretty soon the powers that be would bring in a business guy with experience in sales, marketing, finance, or operations, to run the place. These executives wouldn’t be thinking about the needs of the engineer and weren’t focused on product first. Bill was a business guy, but he believed that nothing was more important than an empowered engineer. His constant point: product teams are the heart of the company. They are the ones who create new features and new products.” [Pages 67-8]

About teams again, and trust : “Not surprisingly when Google conducted a study to determine the factors behind high-performing teams, psychological safety came out at the top of the list [1]. The common notions that the best teams are made up of people with complementary skill sets or similar personalities were disproven; the best teams are the ones with the most psychological safety, And that starts with trust.” [Page 84]

About talent: Bill looked for four characteristics in people. The person has to be smart, not necessarily academically but more from the standpoint of being able to get up to speed quickly in different areas and then make connections. Bill called this the ability to make “far analogies”. The person has to work hard, and has to have high integrity. Finally, the person should have the hard-to-define characteristic: grit. The ability to get knocked down and have the passion and perseverance to get up and go at it again.” [Page 116]

And finally, may be most importantly, about founders: “He held a very special place in his heart for the people who have the guts and skills to start companies. They are sane enough to know that every day is a fight for survival against daunting odds and crazy enough to think they can succeed anyway. And retaining them in a meaningful way is essential to success in any company. Too often we think about running a company as an operating job, and as we have already examined, Bill considered operational excellence to be very important. But when we reduce company leadership to its operational essence, we negate another very important component: vision. Many times operating people come in, and though they may run the company better, they lose the heart and soul of the company.” [Page 178]

[1] More details about the study can be found in James Graham, “What Google Learned from Its Quest to Build the Perfect Team” New York Times, February 25, 2016.